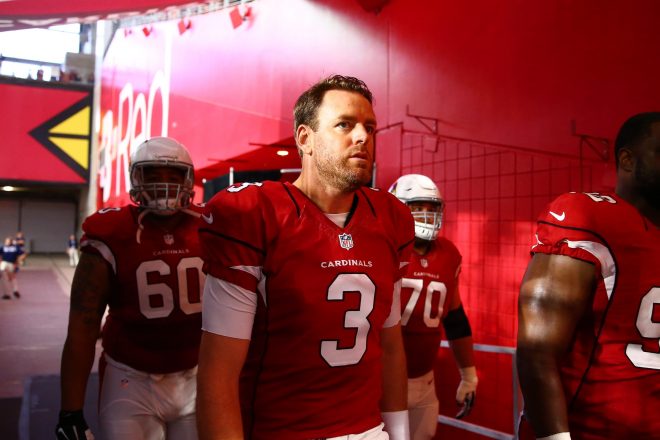 It’s been a rough year for Patriots quarterback Tom Brady, who finds himself suspended after the biggest set-up and unfair investigation in NFL history, but those who haven’t ever been accused of something they didn’t do have the luxury of a different perspective, which Carson Palmer expressed on Wednesday.

Palmer, who took nearly a decade to win his first playoff game, apparently doesn’t feel bad for the Patriots quarterback, who endured a lengthy witch hunt by the NFL and lost in court against the Commissioner that led to his four-game ban.  Despite the lack of evidence of any wrongdoing and even more where science proved nothing ever even happened to the footballs that night, Palmer doesn’t care and seems to believe Brady made his own bed, and now he’s forced to sleep in it.

“I tried not to follow it just because it was everywhere for so long,” Palmer told reporters this week via CSNNE.  “But I go back and … you follow what the rule book says and go about your business and your work and if they tell you not to do it and you get busted and what happens, happens then you suffer the consequences.”

It’s always easier to say that when you haven’t been through it.  The mess that was created by the lack of owner and player support during the debacle helped set the stage for Roger Goodell to set a precedent that will definitely hurt them later, but they’re just not yet aware of that reality.  For now Palmer seems to simply feel that Brady’s guilty and that when something like this happens, beating the league is something that just doesn’t happen.  Now he’ll enjoy the advantage of having to take on a weakened Patriots team who will be on the road to face his team this weekend.

“There was humidity and not enough humidity and whatever it was and altitude.  I don’t really know,” said Palmer.  “I didn’t follow the story. As soon as it came on I just turned it off because I was so sick of hearing about it. Whatever the league comes down upon and whatever ruling they make is what they make. You don’t have much of a decision after that and you can fight it for a little bit but after a while, you just gotta abide by what they say.”

Hopefully for Palmer’s sake, he’ll never find himself in this position.  If he ever does, he’ll probably feel quite differently.