Good morning, here are Sunday’s Patriots news 9-4, and AFC East Notes for this week. Fans of all 32 teams have to be happy to know that the next time their teams take the field, the games will be for real.

Patriots Initial 53-man Roster Set…Expect Changes: With the release of 20 players on Saturday, the Patriots have their first look at the 53-man roster. I would imagine, and if history plays out again, there will be some changes before the team meets Arizona a week from tonight but for now it breaks down positionally as such:

The team is noticeably light at WR and heavier at TE, which may change once the team scouts the waiver wire. If this current breakdown of the roster carries over to the Arizona game, then one could expect a lot of the “12” or “22” personnel groupings that go heavy on the tight ends which would help the running game.

They may opt for a running back or an offensive tackle as well. There are several of each now available but it will all depend on who the coaches covet.

Ninkovich’s Rep, Not the Team Takes a Hit with the Suspension:
Friday’s news was a bit of a surprise with the story that was broken by ESPN’s Mike Reiss that Pats LB Rob Ninkovich was to be suspended for the first four games of the season for violating the league’s rules for taking a banned substance.

Ninkovich said that he was “shocked” and “devastated” by the news, saying he would never knowingly take a banned substance.

“Few things are more important to me than my name and reputation. This might call that into question for some, which has me heartbroken,” Ninkovich said to Reiss. “I don’t want to cut any corners. I want to do things the right way, with high integrity, and that’s what I have always wanted to stand for.”

While he’s always been a smart, stand-up player, Ninkovich made a very dumb mistake here. Every year we hear the same stories of players being suspended for taking supplements they didn’t know were illegal. With their livelihood as well as 4 games of paychecks on the line, not checking with team doctors before taking them is a risk not worth taking.

His suspension, however, is only damaging to his reputation in this case. After tearing his triceps in August, Ninkovich wasn’t expected to play until October. His suspension will be up on October 3 at which time he’s eligible to return. In his absence, he won’t count against the 53-man roster and allows the team to carry an extra player.

No Hard Feelings NFL? Think Again says Brady:
In what has to be construed as a shot against Roger Goodell and the NFL, it seems Tom Brady has been making his feelings on how he feels about the league and his suspension known…on the field. 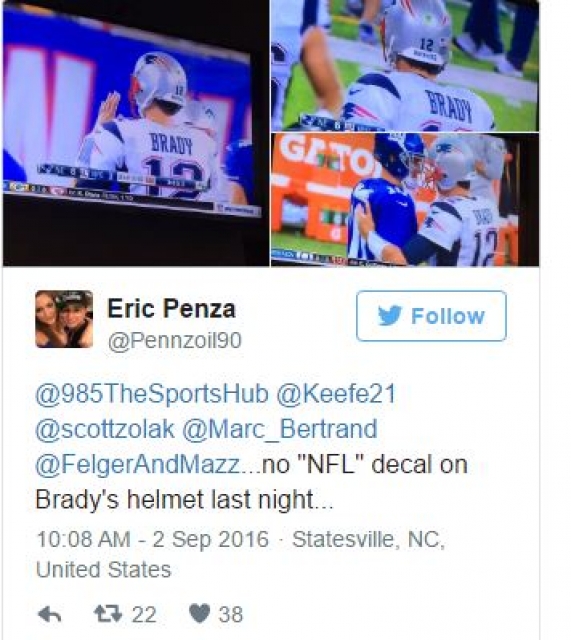 Brady has played the final two preseason games after removing the NFL sticker from his helmet. An alert Patriots fan from NC and CBS’ Michael Hurley published some photos from Friday that show the Patriots QB removed the NFL sticker from the left rear of his helmet, essentially an equipment violation. Normally these are subject to a fine from the league. But we all know how that last one went…

Brady in his final press conference on Tuesday before his suspension takes place showed a bit of annoyance towards the league. When he was told that his personal trainer Alex Guerrero would be allowed to work with him during his 4-week absence, he shot back, “Well that was nice of them.”

Rest assured, the peons at Park Avenue have already sent a FedEx envelope to 1 Patriots Place about this latest equipment violation and obvious assault on the “integrity” of the game.

ESPN Unveils 30 Days Without Tom Brady:
Believe it or not, this is a real web page put out by the “Worldwide Leader” on Saturday immediately after the 4 p.m. start of Brady’s suspension. Sounds like the good folks at Bristol are taking victory laps over this one. Complete with a time clock. Check it out for yourself and feel free to leave your feedback for them.

They brought in help in the offensive line this summer so last season’s 4th-round pick, Jamil Douglas who started six games a year ago and veteran Sam Young were jettisoned. The Fins also cut former Patriots defensive lineman Chris Jones who impressed at camp by most media reports.

Jets Trying to Emulate Patriots of 2000, Keep 4 QBs on their 53-Man Roster:
The Jets made their cuts to the roster this weekend and have decided to keep all four quarterbacks. Beat writer Manish Mehta took to Twitter on Saturday to say that Gang Green is hoping to emulate the Patriots of 2000 with the keeping of four signal callers. Fred Kirsch of PFW was quick to point out that the Patriots of that year went 5-11.

Among the players released were former 1st-round draft pick Dee Milliner, FB Tommy Bohanon and former Patriots WR Kembrell Thompkins and TE Zach Sudfeld. Milliner signed a fully guaranteed 4-year, $12,661,000 contract as a rookie and he’s still owed over $4 million of it. But injuries have derailed his career to date and he’s missed 27 of 48 games thus far.

Bills Trim Early to 53, Including Expected Starter LB Manny Lawson:
Rex Ryan and the Bills trimmed their roster to the league mandated 53-man roster limit on Friday, ahead of the Saturday 4 p.m. deadline and included a few surprises.

LB Manny Lawson who was expected to start opposite of Jerry Hughes, at least until Shaq Lawson returns from shoulder surgery was released. And the Bills in another surprise move released FB Jerome Felton.

Lawson, 32, was a $2.35 million cap hit for the Bills in 2016 which they’ll save. In his stead, the team will start veteran Lorenzo Alexander. With the release of Felton, the Bills will keep a Gronk. Rookie FB/TE Glenn, the youngest brother of the Patriots Rob also known as “Goose”.
Follow me on Twitter @SteveB7SFG or email me at [email protected]