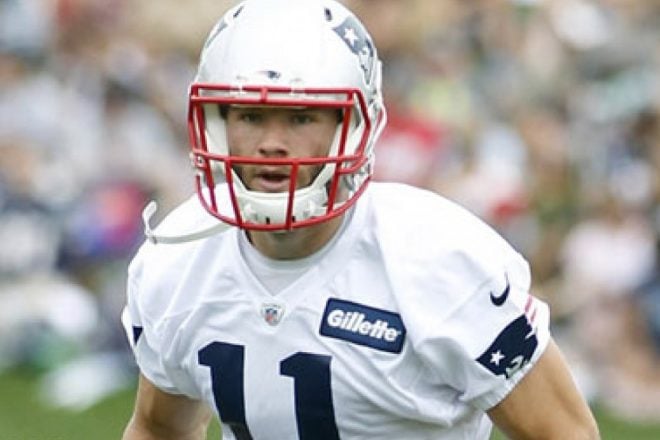 Things Get Heated Again as Edelman Returns to Practice – One of the notable parts of practice on Tuesday was the return of Julian Edelman, who looked terrific as he got some work in against the Chicago Bears.  If there was any concern about his health, for at least one day, Edelman put those fears to rest.

The veteran was solid and had a couple of notable moments on the afternoon, embarrassing Tracy Porter after he kept changing direction and then pulled off a similar feat where he put a triple move against linebacker John Timu, breaking away by at least 10-yards as he hauled in a touchdown pass, making it look easy.

However, there was a brief gasp by fans who were on hand when Bears safety Harold Jones-Quartey delivered a big shot and blindsided Edelman after a play during team drills, which led to Aaron Dobson coming to his defense and getting in Jones-Quartey’s face before head coach John Fox pulled him out of action for the remainder of the session.

Jones-Quartey said later that his instincts got the better of him, with Edelman’s move causing him to go after him.

“I just try to play as hard and as fast as I can and try to work on my position,” Jones-Quartey told the Chicago Sun Times. “The open-field tackle is one of the hardest plays to make as a safety. That situation right there, I didn’t need to bring him down. It was a mistake.”

But for the second-straight day, head coach Bill Belichick ejected one of his own players for getting in a physical altercation, with Tuesday’s player being Bryan Stork.  The veteran center lost his composure during an 11-on-11 drill where he was spotted wildly punching Bears linebacker John Timu, who put his hands in the air and didn’t engage Stork, with Fox coming over before things escalated any further.  Stork then left practice.

The team has one more practice on Wednesday before taking on the Bears Thursday night at Gillette Stadium. 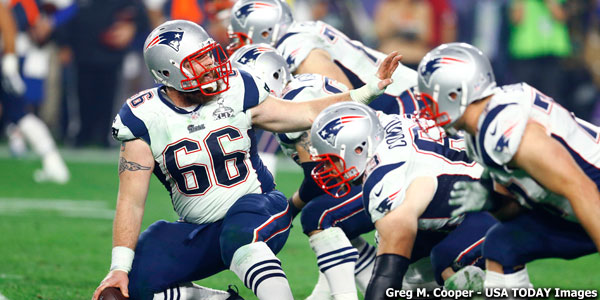 Stork was booted from practice on Tuesday. (USA TODAY Images)

Gronkowski Dealing With a ‘Bruise’, Expected to Be Fine – Rob Gronkowski’s departure from practice on Monday was a little concerning but after reports that it wasn’t anything major, a report on Tuesday further further reinforced that fact.

According to the Boston Herald’s Jeff Howe, the tight end is apparently dealing with a bruise that caused him to hobble off the field Monday.

Gronkowski didn’t practice Monday but Howe reports that the injury shouldn’t be a concern moving forward after he recovers.

Vereen Comes Out of Retirement after One Day, Gets Cut – One day after reports of retiring, Brock Vereen seemingly had a change of heart after Howe reported that he was reinstated from the retirement list after just 24 hours, but he’ll have to seek employment elsewhere.

The Patriots announced the defensive back’s release on Tuesday, which certainly adds a bizarre element to the story.  It’s hard to speculate too much given the lack of details, but at the age of 23 it was certainly strange to see Vereen end his career so early and it looks like he might not be done just yet.

Patriots mulling options at linebacker? – It’s been a quiet preseason thus far transaction-wise for the Patriots, but it looks like behind the scenes they’re continuing to do their due-diligence while mulling options as they continue the process of planning their 2016 roster.

According to ESPN’s Vaughn McClure, former Falcons linebacker O’Brien Schofield worked out for the Patriots last week and is currently mulling six offers, citing a source.  McClure reports that Schofield plans on making a decision in the next two weeks.

Schofield, 29, played in all 16 games for the Falcons in 2015, finishing the season with 30 tackles and four sacks.

Belichick Has Praise For Andrews – Heading into his second season, it seems like David Andrews is doing the right things, or at least enough to draw praise from Belichick.

The head coach was asked about Andrew’s progress so far this year, and Belichick said that he’s been pleased with what he’s seen from the Patriots offensive lineman, with the rookie looking more confident so far at this point in camp.

“Just his second year, a lot more experience, and confidence, and quicker reactions, and calls on the line of scrimmage than he did last year,” said Belichick.  “Not that it was bad last year, it was good. It was really good for a rookie but it’s even better this year.”

“He just has more experience and I’d say more confidence,” Belichick continued.  “We do some things with the cadence and he does a real good job with that as well. There are a lot of things that he has added to his game, little things, but those add up. He’s done a good job.”

Hogan Putting in the Work – We’ve seen past receivers who have struggled here when it comes to trying to learn the playbook as a new player, but it looks like Chris Hogan is certainly doing all the right things as he continues to get acclimated to the Patriots’ offense.

Hogan told Mark Daniels of the Providence Journal on Tuesday that he’s been spending most of his free time studying and trying to make sure he knows the offense inside and out, and so far from what he’s shown in practice, the hard work appears to be paying off.

“I’m just staying on top of all the details and holding myself accountable, knowing all the plays and all the positions,” Hogan told the newspaper. “So that’s the biggest thing for me — staying in my playbook, not getting comfortable with anything because there is always new stuff to learn. There are always little details that you might have missed here and there that you bring out to the practice field.”

Hogan missed last week’s game against New Orleans after suffering a shoulder injury during the week in practice, but it looks like he’s finally getting healthy and fans could get a glimpse of him this week against the Bears.

By: Ian Logue
New England Patriots news for 6/24 along with NFL notes.
2 hours ago

By: Ian Logue
The Patriots tied up some loose ends after getting Cole Strange, Tyquan Thornton, and Bailey Zappe each under contract on Thursday.
17 hours ago

By: Robert Alvarez
Rookie receiver Tyquan Thornton shares a photo over Instagram confirming he has signed a contract with the Patriots
22 hours ago

By: Robert Alvarez
The best social media posts and reactions to Rob Gronkowski's decision to retire from the NFL for a second time.
22 hours ago