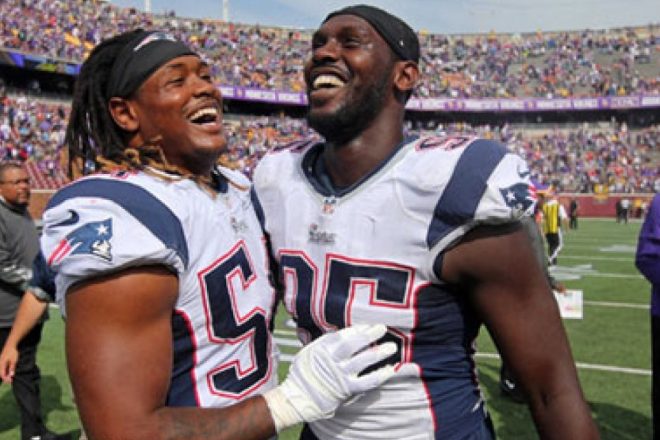 Former Patriots DE Chandler Jones has settled in pretty well out in Arizona, and he’s clearly put his time in New England behind him as he continues spending the preseason trying to get acclimated to the Cardinals’ defense.

Jones, who was traded to Arizona over this offseason, found himself among a talented group on defense that left the Patriots trying to figure out who they’d invest in and who they’d let walk, with Dont’a Hightower and Jamie Collins as two key names that need extensions.  Factor in that Malcolm Butler is also deserving of a raise, and it’s just a situation where there’s too much talent to be able to pay everyone.

That put the writing on the wall for Jones, and he heard the whispers before he found out his time as a Patriot was done.  But in his mind he’s left with the impression that the Patriots don’t like spending money on top talent, when in fact, it’s really that they’re simply extremely selective about who they’ll invest in, and Jones didn’t make the cut.

“They’re not known for really paying guys over there,” Jones said recently via USA TODAY. “There were rumors going around that I might be traded, but you never really read too much into rumors. When it happened, it was just a tad shocking. But I packed my bags and moved on.”

The former Patriot isn’t entirely accurate in his statement, with players like Tom Brady, Devin McCourty, Rob Gronkowksi, along with former Patriots Jerod Mayo, Vince Wilfork and Logan Mankins among names who have received significant extensions during their careers.  The latter two names are ones who had probably the most public and ugly negotiations, with Mankins’ probably being the worst given the repeated comments by both Mankins and his agent, Frank Bauer, who held little back as it pertained to the process before the offensive lineman’s eventual extension.

But the deals eventually got done.  Unfortunately for Jones, the Patriots pay top-dollar for players who consistently perform at a high-level and are reliable, which the former Syracuse defensive end had a tough time with.  He battled injuries throughout much of his time here and had stretches of high production, but far too many droughts in-between.  Given how much of an impact that Hightower and Collins provide consistently to the Patriots defense, it’s no surprise that the Patriots appeared more focused on trying to lock up those two players for the long-term, although neither has yet to be extended.

Jones said that he didn’t get to speak to Belichick when he learned of the trade, but he did talk to him and thanked him for sending him somewhere where he could play for a competitive team.

“I didn’t get a chance to speak to him (the day of the trade) – he was on a flight or something,” Jones said. “But I called him the next day and said, ‘Hey, you could’ve traded me to any other team, so thank you for not trading me to a crappy team.’”

As for an extension, Jones is just planning on letting things play out as he continues getting ready for this season.

“I’m not thinking about (the contract) at all,” Jones told the Cardinals’ Official Site.  “I’m here for however long I am here and I’m here to play and I am here to win. They brought me to hopefully go to Super Bowl 51 and so my biggest goal is to get better every day.”

The Patriots will open up the season against Jones and the Cardinals out in Arizona on September 11th.