Welcome to PatsFans.com Lee Schechter:
Here we grow again. Many Patriots fans will remember the outstanding work done by Lee Schechter for ESPN Boston covering the Patriots during the Super Bowl run of 2014. He covered a wide range of topics including the now popular “Football Journeys”.

Lee will be joining PatsFans.com in the very near future and we all look forward to reading his work as well as talking with him on our podcasts. He’s an excellent addition to the team and we encourage our readers to check him out soon.

Patriots Announce Times for the First Week of Camp:
The Patriots released the times for the first week of practices for the 2016 training camp. This season opens the 57th training camp in team history and will open when veteran players report on Wednesday, July 27.

The first public practice is scheduled for Thursday, July 28 on the Gillette Stadium practice fields. The team will practice from 9:15 a.m. – 11:45 a.m. for the first four days of camp (July 28 – July 31). On Monday, Aug. 1, the fans are invited to attend the Patriots Hall of Fame Induction Ceremony for Kevin Faulk at 5 p.m. Following the ceremonies, the team will conduct their annual in-stadium practice for Patriots Season Ticket Members and Foxboro residents. 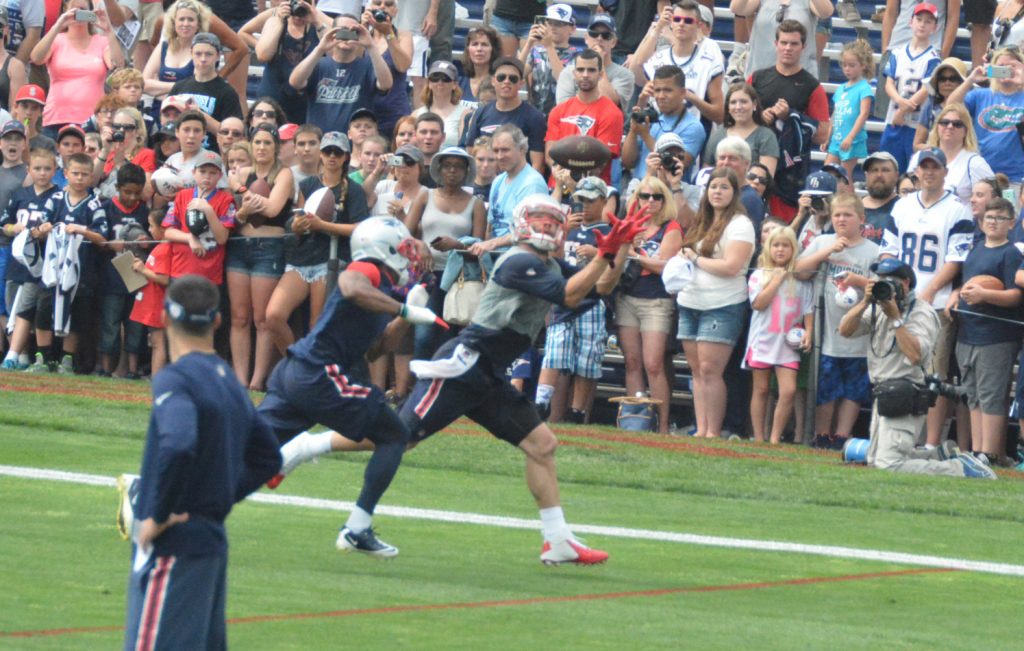 File this one under the “Now You’re Going to Act?” category. The NFL announced that it will finally interview the players named in the Al-Jazeera PED scandal, not named Peyton Manning. Back on January 11, the league said it would investigate the claims made then recanted by Charlie Sly. Now it released the information that the players involved will be interviewed at the end of July.

Anyone catch the Genealogy Roadshow on PBS this week? While filming a segment in Providence, RI the producers spoke with former Patriots LB Steve King in a brief cameo outside the Providence Library. King was researching some of his OK roots. Tuned in to watch old friend Carolyn Peary find some of her long-lost relatives and caught King at the very beginning.

Baltimore Ravens WR Steve Smith was caught off-guard by a young Patriots fan at his football camp this week. As Smith broke a huddle with his campers, one kid yelled out “Go, Patriots!”. Caught off-guard, Smith was momentarily speechless but recovered and laughed about it afterward.

Ben Affleck Goes Off on Deflategate:
By now, most everyone in New England has seen the profanity-laced tirade that actor and friend of Tom, Ben Affleck unleashed on Bill Simmons new show on HBO.

Affleck was Simmons’ guest on his “Any Given Wednesday” and was entertaining, to say the least in his defense of Brady. He unleashed 18 f-bombs (by his own count), and summed up how most people of Boston feel in a nutshell.

His take seemed less like the polished actor he is but more in line with talking to one of the locals at the “Perfect Game” in Woohstah or the “Post Office Pub” in Grafton. Check it out here: https://youtu.be/BhEqsNYLaSM

Still an Open Slot on 90-Man Roster, Who Gets Added:
With the Patriots roster currently at 89 players, the team still has a vacant slot to fill prior to training camp beginning on July 27. One position that has received a lot of conversation this spring and early summer has been the running back position. 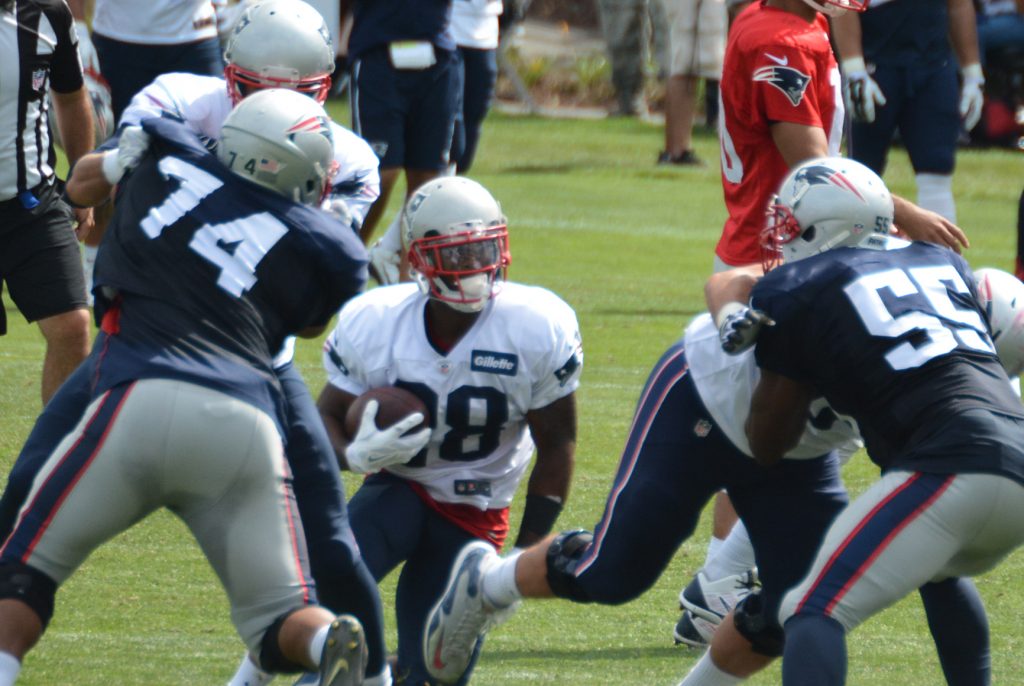 It is an area that the team could add another established vet and much talk has revolved around Arian Foster now that his Achilles injury is seemingly healed up. Kevin Duffy from MassLive.com wrote an intriguing piece Friday where he added a couple of other names into the mix. Included are Knowshon Moreno, Anthony Dixon, Vic Ballard, and Bernard Pierce. The running back position will obviously be relying on the availability of both Lewis and Blount during the early days of camp.

Early 53-Man Roster Projections:
Speaking of the Patriots roster, we did our podcast on Friday morning and were taking an early look at some of the roster battles that will take place and gave our too early take on who will stay and who will go for the Patriots 53-man roster. Actually, 54 if Tom Brady’s suspension is held up by the courts and they keep an extra body on the team for the first month.

Take a listen here and be sure to listen in on our future podcasts as we’ll be doing a preview of the AFC East opponents (see link below) with the opposing team’s beat writers.

Jonathan Cooper Eyeing Fresh Start with the Patriots:
When the Patriots traded Chandler Jones this offseason, most people were looking at the 2nd round draft pick, since the team was short their first-rounder, taken away in the Deflategate punishment.  But the addition of G Jonathan Cooper in the mix could be a potential big addition to the Patriots.

Cooper was drafted by the Cardinals in the 2013 NFL Draft with the #7 overall pick but then broke his leg in the first preseason and has struggled since. “Things since I broke my leg, haven’t quite been where I wanted them to be,” Cooper said on Sirius XM NFL Radio.

“It’s just one of those things, you’ve worked hard and things just haven’t seemed to fall your way. Honestly, it’s more of a mental thing than anything else. I feel like the biggest thing is the actual fresh start with a new organization and being able, from this day forward, to rewrite my history and be a better player than I was before,” Cooper added.

He’ll have every opportunity to turn his career around working with one of the best positional coaches in the NFL with Dante Scarnecchia this training camp. If anyone can bring out his best, it is Scarnecchia. Cooper will be one of the most intriguing players to watch once training camp opens in July.

Dolphins, Jags and Bucs Combine to Support Orlando Victims:
In a very classy move, the three Florida-based NFL teams have combined their efforts to raise money for the victims’ families as well as the survivors of the terrorist attack in Orlando.

The teams have raised $400,000 for the OneOrlando Fund to aid the families of those who were killed or injured on the night of June 12th.

“It’s hard to find words to describe the emotions we all felt when news of this senseless tragedy broke,” Dolphins owner Stephen Ross said. “We are united with the NFL, the Jaguars and the Buccaneers in making this commitment to the OneOrlando Fund. We give our heartfelt condolences to those impacted by this horrific act and are hopeful that these donations help in their time of need.”

Jets’ Wilkerson Back to Running Again:
While the on-going battle between the Jets and franchise tagged DL Muhammad Wilkerson drags on there is some good news in regards to him. He’s been running on his injured leg for the first time since breaking it last season.

While Wilkerson has yet to sign his $15.7 million-dollar franchise tender and may not show up for the start of training camp, the development of his rehab work is good news for Gang Green.

Wilkerson is one of the better DL in the league and his presence in the middle of the defensive line will be a big boost for the defense if he’s available Week 1.

Bills Ponder New Stadium Options:
Although the Buffalo Bills invested over $130 million in stadium upgrades in 2014, the fact remains that Rich Stadium, built in 1973 is one of the older NFL arenas. Bills owner Terry Pegula spoke on the radio this week stating that the NFL believes that building a new stadium should be in the Bills future plans.

“I think they think we need a new stadium, that’s where they’re coming from, so you need to listen to that and you make your own judgment,” Pegula said. “Our stadium is one of the older venues in the league…. We’re not going to make any hasty decisions, but we’re evaluating.”

Speaking of the Bills, I sat down this week with Bills beat writer and ESPN columnist Mike Rodak and we took an early look at the Bills for 2016 and whether he thinks that Buffalo will compete for a playoff spot this year. You can listen here: