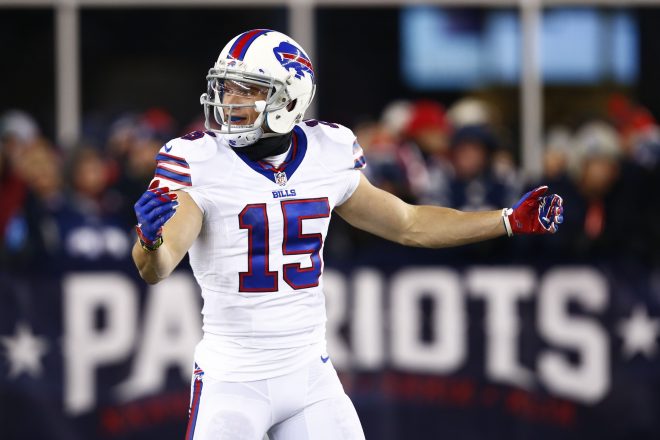 A quiet morning on this Tuesday, but here’s a quick look at some news for this morning.

Big Season Ahead For Hogan – When the Patriots were able to steal wide receiver Chris Hogan away from Rex Ryan’s Bills earliter this offseason, there was a fair amount of excitement given his talents and potential in this offense.

The surprising thing is, despite the high expectations, Hogan’s really yet to prove himself.  At 27-years old, the former undrafted free agent has had his moments but he has yet to really go out and have a big year during his career.  He’s never had more than four starts or eclipsed 450 yards, yet he’s projected to be a key component in the offense this season, especially after the 3-year, $12 million deal the Patriots gave him.  That deal includes $5-million in guaranteed money in his first season, as well as a $500,000 roster bonus, accounting for a $5.5 million cap charge.

For that amount of money, the Patriots clearly believe in him.

The good news is Hogan’s work ethic is strong and that stems from being a guy who has had to earn everything he’s gotten to this point.  Bill Belichick has always been high on players with that characteristic, and Hogan definitely sounds like a player who fits that mold.

“For me, I’m an undrafted guy, so every single year was a battle,” Hogan told the Providence Journal.  “Every single year I was on the block — could be cut, could be released. That’s kind of how I approached it. I never took anything for granted. Every single day was an opportunity for me to be on the field, if I was starting, playing or not playing, every single day I came out here ready to work.”

In New England the opportunity is certainly there for him to be productive.  Catching passes from Tom Brady is a big upgrade over the likes of Tyrod Taylor, Ej Manuel and Matt Cassel, which should hopefully give him the chance to go out and have his biggest season yet.

It’s a great opportunity for a guy who has done all the right things to get to where he is right now.  All he has to do is go out and capitalize, and he’ll obviously be one of the key players to watch when training camp opens next month.

Broncos Believe Sunday Night Win Over Patriots Is One of the Top Five Comebacks in Team History – The official site for the Broncos is taking a look at the most important games in the history of the franchise and during Denver’s championship run, they’re keying in on one big win that ultimately ended up being pivotal for how their season finished.

The Broncos view their regular season comeback win over New England as the one that changed the trajectory of their season, and it obviously turned the tide for the worse for the Patriots.  Fans obviously remember that night, as the Patriots held a commanding 21-7 lead and had held the Broncos to a three-and-out for the third consecutive series, as well as for the sixth time in 10 possessions and seemed poised to improve to 11-0 on the season.

But Chris Harper’s muffed punt started the comeback bid for Denver after Broncos quarterback Brock Osweiler helped get Denver’s offense in gear and they would outscore the Patriots 23-3 from that point on in what ultimately ended as an overtime win.  The victory helped give the Broncos the tie breaker over a New England team that started a stretch where they dropped four of their final six games and ultimately lost when they returned in January for the AFC Championship Game, which they were forced into because of that Sunday Night loss.

Without that win, DenverBroncos.com Senior Digital Reporter Andrew Mason doesn’t believe they would have won the title, and that’s why it also earned the spot in the most important games in the history of the team.

“But in terms of its importance in Broncos history, it takes a clear place in the top five,” writes Mason.  “Without it, the Broncos likely wouldn’t have championship rings to share with friends and family during their current summer break.”

Rep Denies Successful bid for UFC – Patriots owner Robert Kraft was part of a group in the hunt to purchase the UFC and it appears that the sale is going to go through.

Or at least, that had been the case.

According to reports, the MMA league was purchased for $4.2 billion, with The Kraft Group among the group who purchased the popular league.

The Kraft Group, the Dalian Wanda Group and Tencent Holdings were reportedly part of the group led by WME-IMG to purchase the MMA league.

However, an internal memo sent out by the UFC Monday night denied the acceptance of the $4.2 billion offer to sell the company, with Dave Sholler, UFC’s vice president of public relations  denying the report to Yahoo! Sports.

For now we’ll have to wait and see how it plays out but given the reports over the past couple of weeks it looks like it’s just a matter of time.  What that means with Kraft as part of the equation remains to be seen, but given the success he’s had in rebuilding this franchise, it will be interesting to see how is influence affects the future of the sport.

Billy Bob Passes Away – This isn’t a spot where pop-culture references are typically mentioned, but I’d be remiss if I didn’t mention the passing of actor Ron Lester, who played “Billy Bob” in the notorious football movie “Varsity Blues”, which is among some of the favorites when it comes to sports movies.

Lester passed away over the weekend, which happened after his health deteriorated over the last four months due to liver and kidney issues.  He took a turn for the worse and opted to be removed from life support with his fiancee by his side, and he finally passed away.

Lester had already previously faced death after, at a weight of 508 lbs, he underwent gastric bypass surgery in 2000 and flatlined on the operating table.  He lost over 300 lbs, as well as 100lbs following the procedure.

Lester played offensive lineman “Billy Bob” in the movie, which included a host of memorable scenes in the movie as he played one of the key characters.  There were some notable names in that movie, including the Fast & Furious’ Paul Walker, who was killed in an automobile accident a few years ago.

James Van Der Beek, who played back-up quarterback Jonathan Moxon in the movie, posted a tribute to Lester on his Facebook Page.

Our thoughts go out to his friends and family but one thing is certain, thanks to that movie, he’ll definitely never be forgotten.

Here’s a link to an interview with Lester celebrating 15-years from back in 2014 where he revealed some interesting behind-the-scenes facts about the movie.