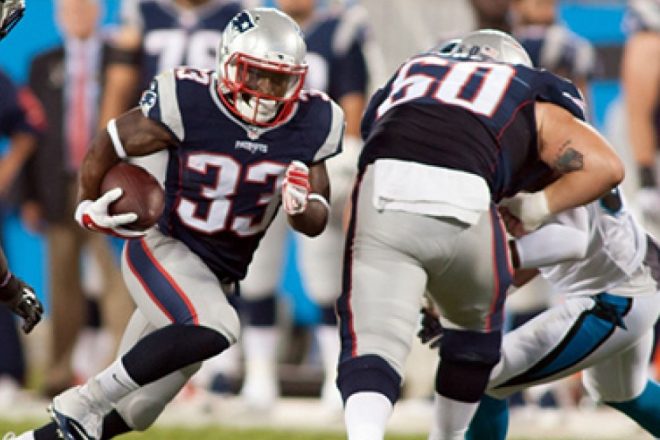 Here’s a quick rundown for this morning:

Gostkowski’s absence obviously stood out, although there weren’t any details as to his absence after he had participated in the previous practices. However, Patriots.com pointed out that Gostkowski and his wife, Hallie, are expecting the birth of their third child, which might explain why he wasn’t there.

Mason Among Players Returning Monday – The return of second-year guard Shaq Mason was among one of the pleasant surprises on Monday, especially after the performance by the former fourth-round draft pick during 2015.

Mason started 10 games last season and was one of the highlights of an offensive line group that struggled during the year.

He actually earned praise from Bill Belichick back in December.

“Probably one of the most athletic offensive linemen I’ve coached,” he said via the Boston Herald during last season. “He’d certainly been in that upper category, the upper part of that conversation. He runs well, has got very good balance, short space quickness, and he’s light on his feet.”

Hopefully he’ll build on a pretty good rookie season, and reportedly got work in at right guard behind Jonathan Cooper late during Monday’s session. 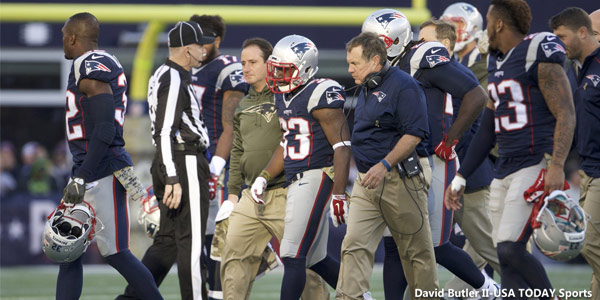 Dion Lewis practiced for the first time since tearing his ACL against Washington last season.

Lewis Looks On Schedule – Another player back in action was Dion Lewis, whose return was one of the highlights considering it was his first practice since seeing his season come to an end against Washington in Week 9 when he suffered the knee injury that sidelined him for the rest of 2015.

Lewis tested that knee in drills and showed some good quickness, planting off his left foot and looking promising as he moved around during the session, which is a positive sign heading into training camp next month.

Lewis admitted he’s a little rusty and still has some work ahead of him.

“Just getting back in the swing of things,” Lewis told Mike Reiss of ESPN.  “I have to get used to catching from quarterbacks and stuff like that. I still have a lot of time and a lot of work to do to be where I know I can be.”

Gronkowski praised Garoppolo’s progress – Plenty of discussion centered on the fact Rob Gronkowski hasn’t been practicing recently due to a possible injury, but he returned to action Monday and had some glowing words for back-up quarterback, Jimmy Garoppolo.

According to Gronkowski, Garoppolo has shown growth and handles the Patriots offense quite well.

“He’s doing great, definitely. You can see a huge development over the last two years in the way he handles the offense now,” Gronkowski said via the Providence Journal. “He’s doing a great job going out there, listening to coaches and just working together with the whole team.”

After all the speculation about his absence, Gronkowski downplayed any issue and said he felt fine and was happy to be back.

Patriots Inquired on Robinson – Belichick is notorious for doing his due diligence as it pertains to players, and it sounds like he might have been willing to kick the tires on ex-NBA guard Nate Robinson.

According to ESPN, the Patriots were among teams that contacted Robinson, who worked out for the Seahawks on Monday

“I’ve heard from a couple of scouts,” Robinson said. “I talked to a scout from the Seahawks about the possibility of working out. Calls from a couple of other teams — the Patriots, I know a guy from the Cardinals. So just trying to get my name out to see if I can get a workout. We’re definitely going to try to do that once I get back home (from playing basketball in Israel).”

Robinson played football in college, with the 5’9″ 180-pound player having played cornerback during his freshman year at the University of Washington before shifting his focus to basketball.

After notching two interceptions during his freshman season, he decided to leave football behind, although he didn’t close the door completely.

“I’m going to leave my options open,” Robinson said when he revealed the decision back in 2003. “But I want to give it a full year to see how good I can be in basketball. If I miss football that much, I’m going to go back.”

“I wish I had played offense,” Robinson said at the time. “I’m an offensive guy. … like my dad. I didn’t get to show the ability I had.”

Now it looks like he’s trying to show off some of that ability and hopefully do something no other NBA player has ever done, and that’s earn his way onto an NFL team’s roster.

Rescuing this guy was a no brainer.. Happy Bday King Leo!! https://t.co/2ss52qcvDJ pic.twitter.com/0uoRfrSat1