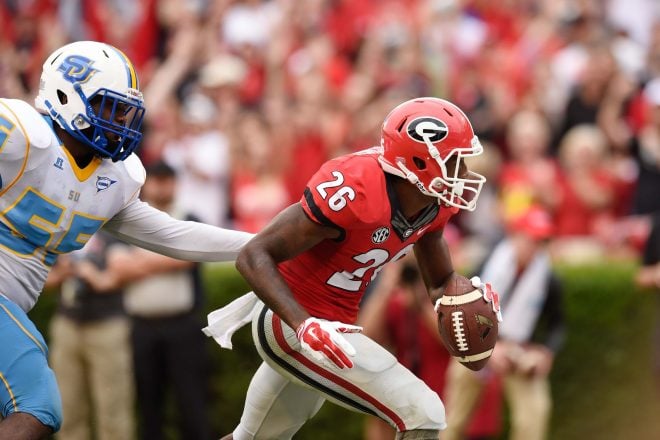 Pats will have intense competition in Training Camp at WR

The Patriots added some much-needed youth into the wide receiver core, by selecting Malcolm Mitchell from Georgia in the 4th Round and Devin Lucien with a comparative steal in 7th Round of the NFL Draft. With Julian Edelman turning 30 later this month and Danny Amendola and Nate Washington turning 31 and 33 respectively this season, the team needed an injection of youth and athleticism.

The team added Chris Hogan during free agency who brings a bit of size, speed, and athleticism to the mix. Now with Mitchell and Lucien thrown into the fray at WR, the level of competition during spring OTAs and into training camp should be intriguing.

The two rookies join Edelman, Amendola, Hogan, Washington, Aaron Dobson, Keshawn Martin, Chris Harper and DeAndre Carter into the mix at the position. UDFA agents D.J. Foster as well as De’Runnya Wilson could also be in the mix.

With Edelman and Hogan roster locks and Amendola very nearly one, that doesn’t leave much room on the roster for the others to compete for a roster slot. Matthew Slater, a perennial Pro-Bowl STs player is a wide receiver (in name only) as well.

But with both rookie draft picks playing outside the numbers, they have the opportunity to contribute immediately and provide some needed production that doesn’t come from the slot.

Mitchell has good but not great size at 6’0, 198 pounds. He shook off some injuries to put up some solid numbers despite overall poor play from the Georgia QBs.

He had 58 catches for 865 yards for a 14.9-yard average, and five touchdowns in his final season. He possesses good speed with 4.45 speed in the 40-yard dash with good hands and the ability to go over the middle of the field and be productive.

He’s tough, runs very good routes but will have to be more physical, as he can get re-routed at the line of scrimmage. He’ll be looked to take over that Brandon LaFell role as the “X” wide receiver. He should be able to fulfill that role well, coming from a pro-style offense with the Bulldogs.

Lucien was considered one of the biggest sleepers in the draft. He spent three years at UCLA before transferring to AZ St.

He’s another guy that runs smooth routes, can make contested catches in traffic. Lucien has decent size at 6’2, 195-pounds and has the ability to make yards after the catch. His scouting profile says “he can turn 15 yards into 40 if he slips a tackle.” He’s very good at working the middle of the field, a Patriots specialty.

After starting the season slowly, he got in sync with the offense down the stretch especially once he got over a hamstring injury which slowed him. He dominated over his last three games with 534 yards receiving and 5 touchdowns.

These two players with Hogan thrown into the competition should give the Patriots plenty of options for Tom Brady to throw the ball outside the numbers, something that was missing in 2015 after LaFell was so successful the year prior.

But let’s temper expectations a bit. Don’t expect either of these guys to come in and catch 60-70 passes this season….that isn’t going to happen. With Rob Gronkowski, Martellus Bennett, Edelman, Amendola, Hogan and (hopefully), Dion Lewis out of the backfield, there just isn’t going to be that many passes to go around.

But they will be able to compete and contribute….Mitchell especially in the offense right from jump street. The training camp battles for reps and roster spots is going to be very interesting to watch.