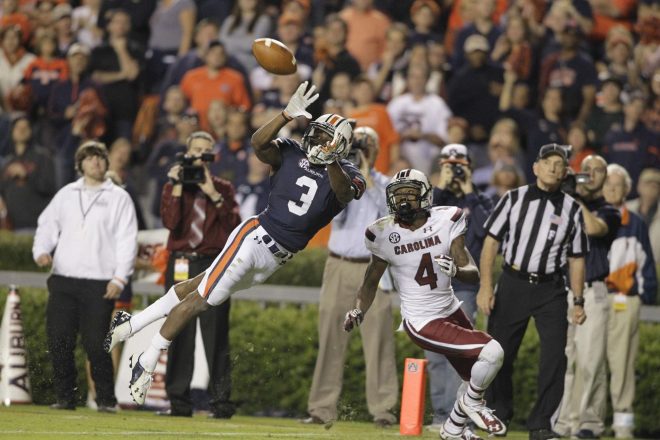 The Patriots have finished the 2016 NFL Draft and have brought in their initial undrafted free agent (UDFA) class. Malcolm Butler was one of those players just two years ago, and the Patriots always seem to have at least one UDFA player that will make the 53-man roster.

So far these are the players that have been signed and there are a few intriguing prospects that could have a shot at sticking around and making the team.

DJ Foster, RB/WR, Arizona State:
Foster is an undersized running back at 5’10, 193 pounds that moved to slot receiver for his senior season after being in the backfield for the first three years for the Aztecs. In 2015, he chipped in with 280 yards rushing as well as catching 59 passes for 584 yards and three touchdowns.

He finished his college career with 444 carries and 222 catches in the passing game for combined 4813 yards from scrimmage for 32 touchdowns. His skills at wide receiver are in the neophyte stage but brings an element of versatility that could be productive. He ran a 4.47 in the 40 Yard Dash, a 6.75 time in the 3-Cone Drill and has a 36-inch in the Vertical.

Jonathan Jones, CB Auburn:
Jones is an undersized (5’9, 186 pound), cornerback from Auburn. He was an All-SEC Selection in 2014 before seeing his production step back a bit last season. He is gifted athletically and ran a blistering 4.33 in the 40 at the NFL Combine as well as a 7.25-second three-cone, 36-inch vertical leap, and 123-inch broad jump. Strong for his size, he did 19 reps on the bench press …two more than 3rd round draft pick, 329-pound Vincent Valentine.

He notched 129 tackles, seven interceptions, and 24 passes defended over his Tigers career. We ran a draft profile on him earlier in the spring.

Steven Scheu, TE, Vanderbilt:
Scheu is more of a “move TE” than a traditional in-line one as he doesn’t have the blocking skills to move the pile at 6’4, 250 pounds. Scheu caught 39 passes for 525 yards and four touchdowns in 2014 before seeing his numbers plummet to 26 catches for only 231 yards due to poor QB play.

While he doesn’t have the speed to attack the seams ala Gronk or Bennett, Scheu has soft hands and a huge catch radius to be able to work the underneath routes to be effective.

Johnson is a 6’1, 234-pound linebacker who has the versatility of playing at either linebacker or with his hand in the dirt at defensive end. Johnson finished his career having notched 180 tackles with 27 for loss, 13.5 sacks, two forced fumbles and three fumble recoveries.

His senior season was cut short due to a torn meniscus and was able to play in only four games. He’s a bit too light to be a defensive end in the NFL and will project to be an inside linebacker for the Patriots.

V’Angelo Bentley, CB, Illinois:
Bentley is another corner who will get some early reps to see if he can stick. Not the biggest guy at 5’10, 190 pounds, he brings like 2nd round draft pick Cyrus Jones the ability to return kicks.

Cre’Von Leblanc, CB, Florida Atlantic:
Leblanc is the third smaller, quicker corner that the Patriots brought in as a UDFA. With the smaller size of 5’9, 194 pounds, he too has special teams expertise, returning 29 kickoffs for 556 yards in his career.

He’s a stocky, muscular defender who former head coach Carl Pelini said was recruited specifically for his versatility as a cover man/run stopper/blitzer. He doesn’t have great top-end speed (4.65 time in the 40) but did run a 6.91 in the 3-Cone.

Woodrow Hamilton, DT, Ole Miss:
Hamilton is a 6’3, 312-pound defensive tackle that played in 47 games with 23 starts at nose tackle. He tallied 83 tackles, seven for loss, and three sacks in his career. At his Pro-Day on March 28, he benched 29 times and ran a 7.90 in the 3-Cone Drill as well as a 4.88 in the Short Shuttle, showing decent quickness for a big man.

De’Runnya Wilson, WR, Mississippi State:
Wilson is a huge, 6’5, 225-pound WR/TE who is a big target in the red zone with an enormous catch radius. His career totals of 133 catches for 1,949 yards and 22 touchdowns over three seasons with the Bulldogs shows he can be productive. He improved each year and in 2015 caught 60 passes for 918 yards and 10 touchdowns.

He’s not fast, (4.81 time in the 40), but is quick off the snap and has good hands as well as he aforementioned catch radius as well as big leaping ability. Still raw, he’d project to be a red-zone target that could be very intriguing if he can catch on.

Devonta Burns, Safety, Texas A&M:
Burns is a 5’10, 203-pound safety from A&M who ran a 4.52 in the 40 with a 7.07 in the 3-Cond Drill at his Pro Day. He has experience playing the nickel back as well as at safety. He’ll have to earn his way onto the special teams unit with the logjam at the safety position.

The Patriots also offered tryouts to RB Shaquille Powell from Duke, and linebackers Kris Frost and Justin Garrett from Auburn.