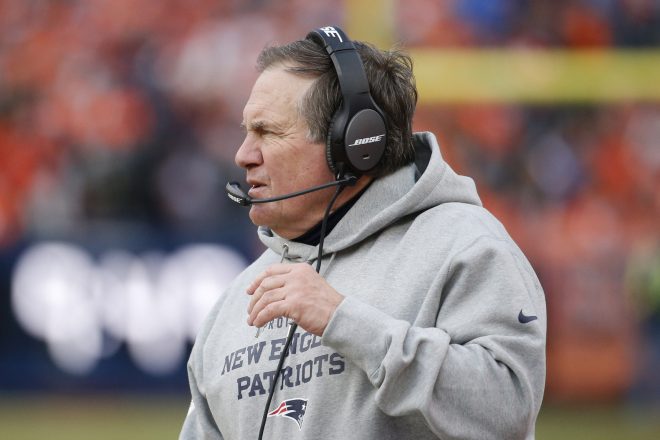 Former Patriots DT Brace Passes at just 29 – Some sad news on Sunday after the news came out on the passing of former defensive tackle Ron Brace, who passed away at the age of just 29-years old.

Brace was a former 2nd round pick for New England back during the 2009 draft, with today marking the seven-year anniversary the team moved up from 47 to 40 to take him following a trade with the Oakland Raiders.  He battled injuries during his career and was only with the team until 2012, finishing with 39 career tackles.

No word just yet on the details behind his passing, but the team released a statement expressing their feelings about Brace’s death.

“We were deeply saddened to hear the news this morning of Ron Brace’s death. Seven years ago tomorrow (4/25/09), we drafted Ron after his standout career at Boston College. During his Patriots career, the Springfield native was always eager to volunteer and give back in our communities, especially when those community initiatives were held in Western Mass. It is difficult to believe that someone so young and in the prime of his life is no longer with us. Our thoughts and prayers go out to Ron’s family, friends and the many former teammates who will mourn Ron’s passing.”

His former coach from Boston College also gave his own thoughts on Twitter about Brace’s death:

While his football career might not have worked out with the Patriots, it doesn’t change the fact he was a terrific person who still made an impact off the field in the community.  After doing a little digging through our archive, here’s a video from 2011 where Brace took some time to teach some children about healthy eating.  Good stuff, and the way he probably would like to be remembered.  Our thoughts go out to his friends and those who loved him, as losing anyone at 29 just isn’t fair.

Critical Week Ahead – With the draft fast approaching this week marks a key period for a team that is clearly at a crossroads.

It’s funny to say, but the Patriots are one season removed from winning a championship, which sets up one of the more intriguing years in recent memory.  Given how close they were last season after falling short in the AFC Championship in Denver, it’s hard not to feel like failing on another championship run in 2016 would be a major disappointment.

That’s the environment we live in here in New England.  Given the fact they have a coach like Bill Belichick and a quarterback like Tom Brady, after four championships, the need to have that feeling one more time remains and to get there will require some success this week.

The Patriots head into Thursday night with 11 selections, although they’re not expected to make their first pick until Friday night due to the fact they’re without a first-round pick thanks to Roger Goodell’s ridiculous penalty from deflategate.  But with as many picks as they still have, they obviously have a terrific opportunity to build a good nucleus of players for both 2016 and beyond.

However, given how their choices in the second round have panned out in recent years, there’s a little reason to be concerned about how their picks in round two at 60 and 61 will pan out.  Will they pick the next Jamie Collins or the next Tavon Wilson?  Will they select the next Rob Gronkowski, or the next Ras-I Dowling?

Looking back at the last time they had multiple second-round picks was 2013, which was the year they took Collins with the 52nd overall pick along with receiver Aaron Dobson.  But they traded out of the first round that year with the Vikings and acquired the 52nd overall pick, landing them the athletic linebacker.   That pick worked out pretty well, but the selection of Dobson started out promising but two injury-riddled seasons later, Dobson’s future is in serious jeopardy and he’s on the verge of ending up on the list of second-rounders who just haven’t worked out.

Looking over the entire list, you can see the ones who haven’t panned out (red) vs the ones who were productive (bolded in black).

There’s been some great moments (most recently with Collins, Gronkowski and Vollmer) and some disappointing ones (Ras-I Dowling, Wilson, and Dobson).  Hopefully after this week, the next round of players added to this mix will avoid ending up in the latter group.  Their future – and potentially this season – could depend on it.

McCourty On Moving On From Mayo – Devin McCourty recently admitted that the dynamic is a little different this offseason, because one of their leaders is notably absent from the locker room.

With the retirement of Mayo this offseason the Patriots head into 2016 without one of their veteran leaders, and the recent return for voluntary workouts has been a reminder of the fact he’s not around anymore.

The former 1st round pick from back in 2008 enjoyed a solid career in New England and was well-liked, with his infectious personality and presence as a leader endearing him to most teammates who had the opportunity to play with him.  That’s not something you can just replace, which McCourty admitted is going to take some getting used to.

“It’s a little more quiet not having Mayo around but we’ll see,” said McCourty.  “He was a huge part of this team – offense, defense, everything, just a huge part. I don’t think you can replace him with a guy. You can’t tell a guy on the team, ‘Well now you need to step up into Mayo’s role’, but I think that’s why it’s always so important to understand that every year the team is different.”

“I think this team will be a little different without him but we’ll have to see how it changes, what develops, but he’ll definitely be missed in the locker room and on the field just because of who he is and how great of a person he is.”

SOCIAL MEDIA POST OF THE DAY:
From Shaq Mason: