With The Patriots making some moves in releasing three different defensive linemen and the NFL Draft less than two weeks away, it is time for our Mock Draft 4.0

All of the big boards differ quite a bit and the site has a random selection process that picks for the other 31 teams based on the best player available and team needs that are constantly updated. For this fourth mock draft (conducted 4-16), I used the big board of CBS Sports.

With the continued moves the Patriots are conducting in free agency, they still have needs at OT, RB, CB and now at DT with the releases of Dominique Easley, Chris Jones, and Ishmaa’ily Kitchen. It looks like the team is building towards bigger tackles to handle run stopping duties since the team spends most of their time in sub-packages. But they can still use a disrupting penetrator…or two.  The team could still use depth at WR and LB… Read on.

Dixon from La. Tech. would be a perfect fit for the Patriots offense and is a true dual-threat running back that can be equally effective running the ball as he is catching it out of the backfield.

Dixon is not the biggest back at 5’10, 215 but he’s not afraid to and is effective running between the tackles. In his four years at La. Tech he had a combined 87 touchdowns, (72 rushing and 15 receiving) and is very effective after first contact. He averaged 3.3 yards after contact.

Burns is a corner with the size, (6’0, 190 lbs), that teams are looking for. Heis a playmaker who led the ACC with six interceptions in 2015. He’s still raw with his technique at times but with his long arms, he very effective at jamming receivers at the line of scrimmage. He has experience at corner as well as free safety.

He’s a very physical corner well-suited to play man coverage. He was a track star with outstanding athleticism and had experience as a kick returner while at the “U”. Burns is also a mature young man who is the kind of guy the coaches here would love. Read our draft profile here: 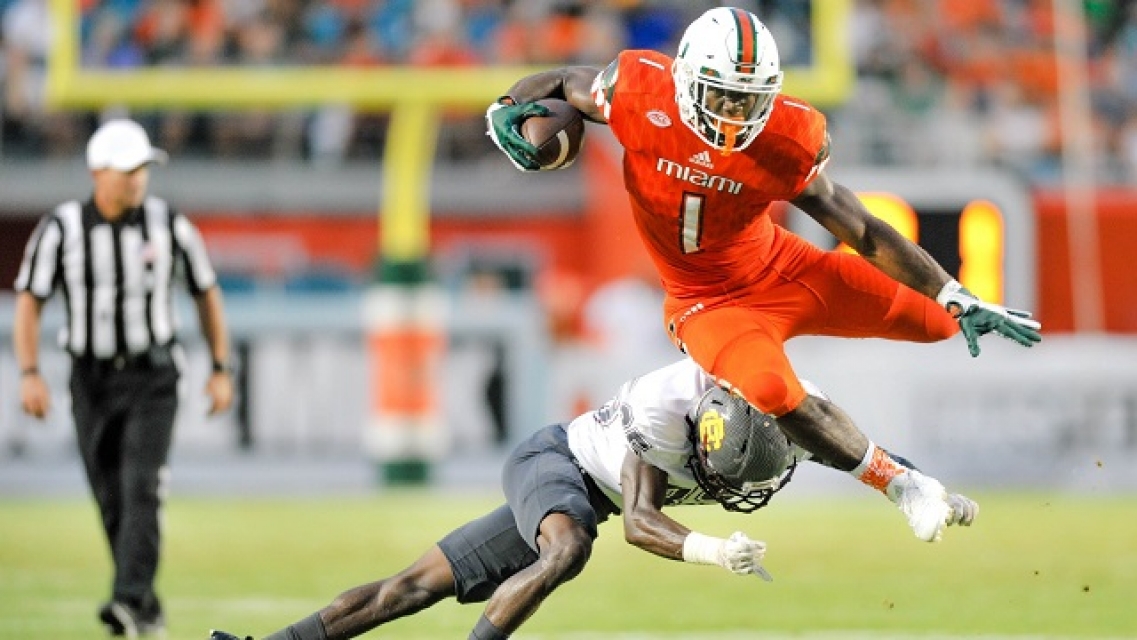 Round 3, Pick #3 DT Sheldon Day, Notre Dame:
Day is a slightly undersized DT at 6’1, 293 pounds but plays with a relentless motor. Like the player he’d replace, Dominique Easley, Day has an explosive first step and is the first to fire off the ball and disrupt plays in the backfield. Also like Easley however, he does come with some injury concerns.

His quick feet allow him to slip by would-be blockers while his lateral quickness and good, aggressive hand movements make him a natural at rushing the quarterback. Played 3-technique and 5-technique at Notre Dame.

With the preponderance of big-bodied run stuffers at the Patriots defensive line, Day fulfills a need for a penetrating pass rusher in the interior.

Carroo comes from the Rutgers player pipeline and possesses good size at 6’0, 212 pounds with a solid, muscular build while displaying very good athleticism despite not having breakaway speed.

He’s quick to catch the ball and turn north-south, averaging over 20 yards per catch in 2015. He runs crisp, effective routes and possesses excellent hands. He’s a very smart player and is adept at working the middle of the field with the occasional double move to go deep. The Patriots already conducted a visit with him.

He has great leaping ability and adjusts well to the ball in the air. Does come with some off-field issues as well. Read our draft profile here: 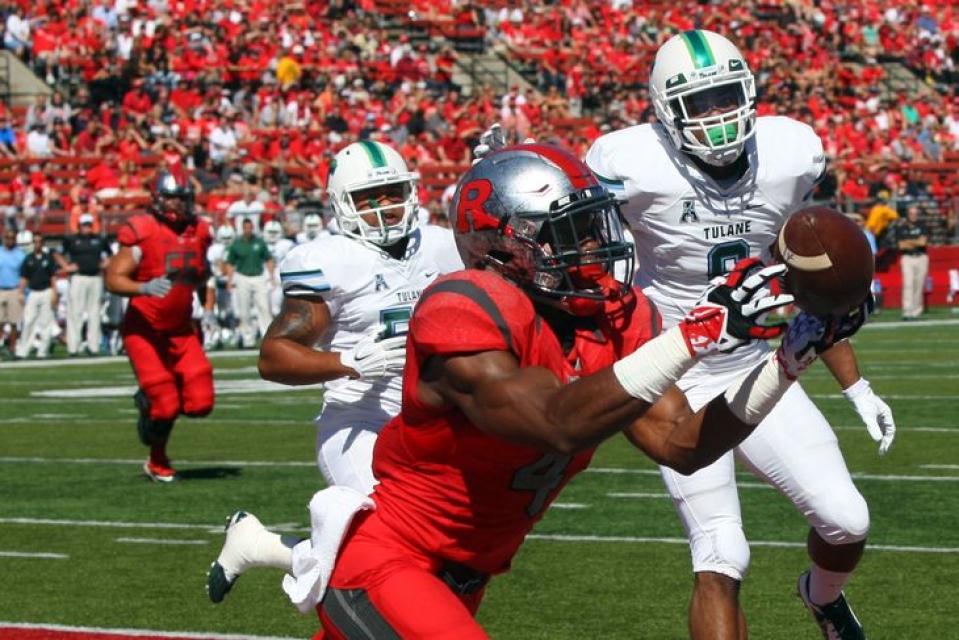 Theus kept sliding down in this mock draft and we gambled that he’d still be here. We were looking for Kyle Murphy or Le’Raven Clark in Round 2 but both were gone.

Theus has very good size for the tackle position at 6’6, 313 pounds. While he started at RT as a freshman, he really didn’t start to get his game together until 2014. He moved to the left side and really improved as both a run blocker and pass protector.

He needs to build up his strength but played against top echelon competition in the SEC. He’d be the RT of the future with some work by Dante Scarnecchia.

Judon is an intriguing player with a nice blend of size, speed, and athleticism to garner a long look during the NFL Draft. At 6’3, 275 pounds he has the prototypical build for a DE but showcases a really nice bend on the edge that keeps tackles from engaging him effectively.

His Pro-Day was attended by scouts from 26 NFL teams. Diamond in the rough.

Round 6, Pick #7 RB Keith Marshall Georgia:
Marshall is another intriguing prospect, at 5’11, 219 pounds he has good size but is an absolute burner, running a blistering 4.31 in the 40. He added 25 reps in the bench press. Stuck behind Todd Gurley, Marshall lost most of two seasons to injury.

He was used as a receiver a little bit as a freshman, something the Bulldogs didn’t do much of with him after that. As an open field runner, he doesn’t possess great moves but with his speed, he can literally run by anyone. Worth a Day 3 look? Sure thing.

Round 6, Pick #8 DT Luther Maddy, Virginia Tech:
Maddy is a second DT who is slightly undersized at 6’1, 295 pounds.  Like Day, he’s best suited to playing in a four-man front as a sub-package interior pass rusher.

He has got a quick first step and explodes into the backfield making plays behind the line of scrimmage. He’s at rushing the QB and a player that improved each year against the run. He too, should add some strength in the NFL.

Round 6, Pick #9 OLB Tyler Matakevich, Temple:
Too small, too slow and not athletic enough is what is commonly heard about the Owls’ linebacker. But all he does is make plays and is very productive.

A football film junkie, Matakevich is always very well prepared and plays with great instincts which counteract his lack of speed. He’s very physical and shows good timing on his blitzes. Non-stop motor and a madman mentality make him a natural STs player, a sure-fire way to earn a roster spot.

Round 7, Pick #10 OT Caleb Benenoch, UCLA:
Benenock was a three-year starter at RT for the Bruins and has the size at 6’5. 305 pounds. He’s athletic with good footwork in pass protection, with good knee bend. Plays at times with a nasty streak which is a positive.

He needs to build up his strength at the next level, especially with his lower body. But has good potential and worth the late round flyer as he fell throughout the draft.

Round 7, Pick #11 QB Jeff Driskell, Louisiana Tech:
Driskell has the pro-typical size of an NFL QB at 6’4, 230 pounds. He shows good scrambling ability and pocket awareness. He’s a tough kid and a competitor who makes good decisions under pressure. He passed for 4033 yards with 27 TDs and only 8 INTs in 2015.

Arm strength and velocity are only so-so. His release needs to speed up at the NFL level. Driskell is a good prospect to garner some reps in TC and to backup Jimmy Garappolo just in case Tom Brady’s suspension is put back into place. 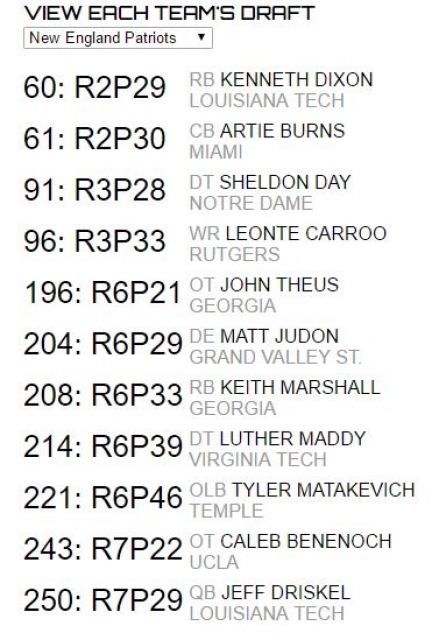 By: Mark Morse
Green Bay comes into this game with a 14-game home unbeaten streak.  It's third to two Patriots records of 16 and 18 games.  They are…
23 hours ago