We’ve reached the halfway point of the week, and here’s this morning’s rundown on a quiet Wednesday.

Brady’s Downfield Success to Gronkowski Lethal Down the Middle – Looking over the numbers from 2015, there’s no question that Rob Gronkowski’s effectiveness when he gets the ball in his hands is absolutely deadly.  He’s even more difficult down the field, and ended up settling in as the Patriots’ biggest big-play threat last season.

During the regular season in 2015, Gronkowski lead all players by a wide margin when it came to plays of over 20 yards. The veteran finished with a team-best 22, far ahead of receivers Julian Edelman and Brandon LaFell, who each had 7.

But down the middle of the field is where Brady did most of the damage with Gronkowski, hitting him on 6-of-7 (86%) passing for 228 yards and a touchdown, with an average of 38 yards per catch.  Contrast that to the 2-of-8 when heaving it Brandon LaFell’s way and it shows you the type of trust and timing the two have between each other.

However, in the right and left hand zones were areas where the two struggled.  On “deep left” throws, a designation the league gives to pass attempts of 15 yards or more in the air to the left side of the field, Brady connected on just 2-of-9 (22%) to Gronkowski, the lowest completion percentage to the tight end in any of the three zones.

But the interesting thing that stood out was looking at the attempts based on how the season played out.  Over the first half of the season, Brady didn’t really make any deep left attempts to Gronkowski, throwing to him just once and missing on his only target to the tight end.  But over the final eight games, essentially all the games Julian Edelman missed, Josh McDaniels moved him around and Brady targeted him 8 times, with just two completions.

On “deep right” throws, they weren’t much better, hitting just 4-of-12 (33%).  It was almost a mirror image of the left in that he was targeted 3-of-9 over the first eight games, compared to just 1-of-3 over the final half of the season.

But down the seam is where he certainly earned his money, and it’s definitely going to be fun to see if the addition of Martellus Bennett ends up opening up more opportunities as McDaniels and Brady start looking for mismatches against opposing defenses.

“He’s a match-up nightmare, he’s a freak,” Brady told WEEI back in December. “It’s hard to compare, obviously, different positions. I can’t say enough good things about Gronk because what he brings to our offense is just …  no one in the league has someone that is just as tough a mismatch as Gronk is.”

Filmmakers To Shoot Scene at Residence of Slain Patriots Fan in Upcoming Film – According to the Boston Globe, filmmakers for the upcoming film “Patriots Day” are planning to shoot scenes for the film about the 2013 Boston Marathon Bombings at the former home of MIT Officer Sean Collier, who was killed by one of the bombers.

Collier’s former roommate, Travis Dixon, still lives in the apartment the two shared and told the newspaper that film crews had reached out to him about shooting there.  While he admitted the decision was up to the city and his landlord, he’s for it as he believes it will help bring awareness to the loss of his friend and the other victims.

He hopes it will “let people see them more than how they saw them in the news.”

Surveillance camera video taken from the scene on the night of his death showed the two bombing suspects creeping up on Collier’s squad car from behind and Police Chief John DiFava said Collier, “didn’t stand a chance.”  He was reportedly shot five times.

Collier, who was also a Patriots fan and shown in this photo in a Wes Welker Jersey, was honored in 2013 of that preseason in a moment of silence during a game against the Buccaneers.  MIT also created a Memorial Fund in his honor. 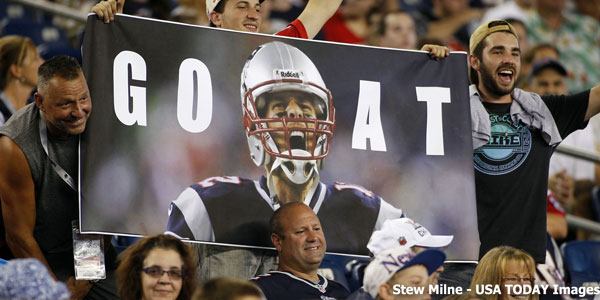 Patriots fans recently filed a suit against the NFL to try and recover the team’s 1st round pick.

Patriots Fans File Suit Against NFL, Kraft – Some fans have gotten together and taken matters into their own hands after filing a lawsuit against the NFL in a last-ditch effort to restore the Patriots 29th overall selection in the upcoming draft.

Seven fans, four of which are from New England, are taking the league to court, citing emotional distress while claiming the league violated state consumer protection laws as well as committing fraud, breach of contract and negligence.

Maine attorney Seth Carey, was the one who filed the suit and called the league “un-American” for how things have been handled.

“Letting the powerful oppress us when we’ve done nothing wrong is as un-American as it gets,” Carey said in a statement. “That attitude is the polar-opposite of what the real patriots fought and died for on the very ground that NFL owners sit while they rake in billions of dollars from us fans.”

The suit even takes a shot at owner Robert Kraft, which says the owner “had remedies to attempt to get Plaintiffs’ draft pick back, but he chose his fellow billionaire owners above the Plaintiffs and fellow fans.”

This is the third effort put forth regarding trying to go after the league for its penalty against New England.  There were other fans who started a petition, which has garnered nearly 7300 signatures.  We also recently launched our own effort encouraging fans to completely avoid night one of the draft, both in terms of the broadcast and also online in an effort to cost the league ad revenue, which is about the only area that probably matters as far as the NFL is concerned.

The team released its media schedule on Tuesday and the Patriots made an interesting move, electing not to allow media access until day two of the draft, which as of now would be when they make their first selections.  Obviously they don’t have the luxury of ignoring it, but it would seem less likely that they’ll be participating.

Goodell: Playoffs ‘likely’ to expand – The NFL has been one of the only leagues where making it to the postseason has been more difficult and meaningful compared to the NBA and NHL, but it certainly sounds like the possibility of diluting the field may be on the horizon after Roger Goodell’s recent comments.

Goodell was in Jacksonville speaking at a town hall meeting with Jaguars season ticket holders and said that expanding the number of teams in the postseason is something that he expects to happen, but not until they have a plan to make it work.

“It’s a tough one,” Goodell said, via the Jags’ official team website. “And the reason I say that is it works so well right now. We have 12 teams that qualify for the playoffs and what it does is it’s not just the number of teams in the playoffs, it’s what it does to our regular season. I think that’s what makes the NFL great is every game means so much. That game means a great deal. You don’t ever want to lose that. You don’t want to lose the fact that every regular-season game is important. And only having 12 teams qualify, which is the smallest of any of the professional leagues by far, that’s a good thing for us …

“Could you do it? Yes, you could do it. From a competitive standpoint, our competition committee said ‘we think we can do it properly.’ We’re still looking at the broadcasting side of it and then there’s a labor-relations side of it too, which you have to deal with with the union. But it will continue to get discussion.”

The league obviously has its problems when it comes to the current playoff format.  A good example of that was what happened in the NFC when the Panthers got in back in 2014 with a record of 7-8 after winning the NFC South and a team like the Eagles, who finished at 10-6 behind the 12-4 Cowboys in the NFC East, didn’t.  Neither did the 8-8 49ers.

Carolina knocked off the 11-5 Cardinals in the Wild Card round and then got bounced by the 12-4 Seahawks in the Divisional round one week later.

Fortunately, the league didn’t have any sub .500 teams win the division in 2015 so it wasn’t an issue.  But that’s obviously something that will need to at least be addressed if they decide to dilute things further.  It’s hard to predict every scenario and flukey things certainly happen in this league, but with the idea of an 18-game schedule still being floated and now potentially another playoff game, it will be critical for them to come up with a way to ensure that the right teams get there.  But, according to Goodell, it sounds like it’s definitely in the plans.

“(It) likely will happen at some point, but we want to be really cautious because we really like the balance we have with the importance of the regular season and the postseason and you don’t want to mess with that balance,” said Goodell.  “You have to be really careful and cautious.”

By: Robert Alvarez
The best social media posts and reactions to Rob Gronkowski's decision to retire from the NFL for a second time.
1 day ago