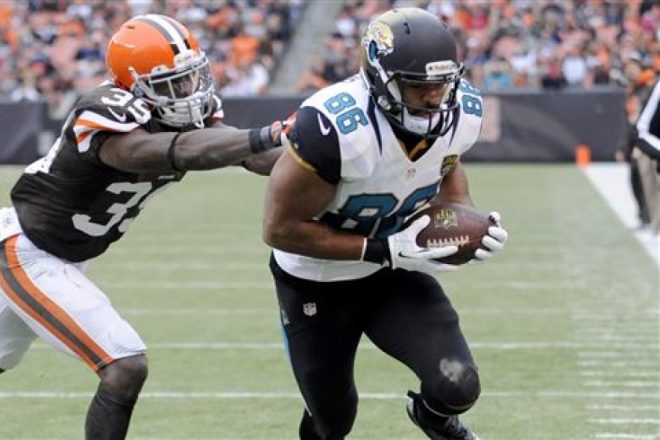 The Patriots keep adding pieces to the offense and on Wednesday they signed another TE adding Clay Harbor who visited them early in free agency.

The signing was first reported by Adam Caplan of ESPN and gives the Patriots another weapon at the tight end position. Earlier the Patriots traded for the Bears Martellus Bennett.

Harbor saw his playing time cut in 2015 with the Jaguars when Marcedes Lewis returned to health as did Julius Thomas and caught just 14 passes for 109 yards and a touchdown. But in the two seasons prior, he snagged 50 passes for 581 yards and three touchdowns.

Prior to the Jaguars coming to Foxboro last season in Week 3, Bill Belichick spoke highly of Harbor and the versatility that he brings to the table.

I’d say that Harbor is kind of similar to (Raiders’ Marcel) Reece,” Belichick said. “He’s a fullback, tight end kind of guy, sort of lines up in a lot of different places. They use him in motion, change formations with him a bit.. Harbor is a good receiver.”

With the Patriots looking to keep the production up at the tight end position in 2016, they now have a logjam there with Rob Gronkowski, Bennett, Harbor as well as Michael Williams and 2nd year pro A.J. Derby.

It’s possible they keep four tight ends on the roster this season. When Gronkowski went down last year, Scott Chandler couldn’t respond with the production they were looking for and Williams is a blocker with limited value as a receiver.

Now with Bennett and Harbor added to the mix, the team will have on paper at least, the most productive group of tight ends they seen since Aaron Hernandez went to prison.

Harbor is more of a move tight end at 6’3, 250 pounds that Josh McDaniels can use flexed outside, as an H-back or even in a fullback mode. Gronkowski and Bennett are more in-line tight ends with the ability to move outside. With these additions it appears that the Bill Belichick and McDaniels are looking to go bigger and more physical on offense in 2016. And having a trio of big, physical and athletic tight ends will make the red zone offense pretty versatile.

Harbor also can be used to great effect in short yardage as either a fullback or H-back where play action passes from Tom Brady will be much more effective if they decide to utilize a 13 personnel package (1RB,1 WR, 3TE).

Rumors were flying that this signing may be the end of the road for the primarily run blocker Williams. While his skill set is much different, it may come down to a numbers game between he and Derby unless the team does opt for a 4th tight end where a cut will have to come from somewhere else.