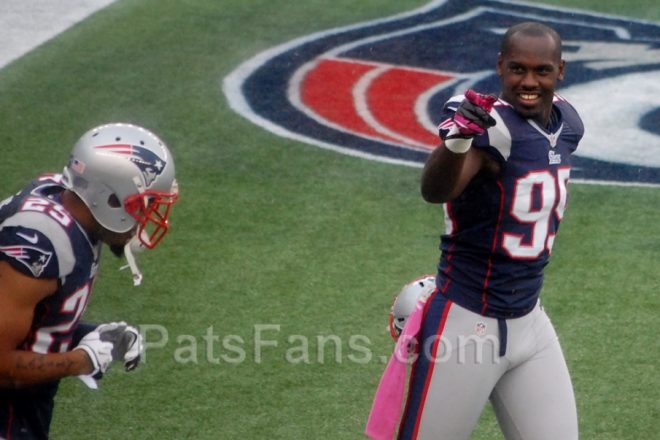 The Patriots free agency period is quiet no more. The Pats just completed a huge trade, moving former 1st round Draft Pick Chandler Jones to the Arizona Cardinals for G Jonathan Cooper and a 2nd Round Draft pick. This was first reported by ESPN’s Diana Russini and Adam Schefter.

The social media scene has been ripe with Jones talk since the 2015 season ended but picked up in intensity the past two days with the news of Chris Long visiting the Patriots yesterday. While no news of Long’s visit has borne reports of his imminent signing, one can connect the dots and see the possibilities unfold now.

Regardless, the trade is a win-win for both teams, Arizona is looking for a pass rusher now that Dwight Freeney is a free agent and the Patriots have questions with their offensive line and have lost their 1st round draft pick with Deflategate sanctions.

Jones, with 12.5 sacks in 2015 will certainly help the Cardinals in that regard although he struggled badly down the stretch with only a pair of sacks in the last seven games. He had two sacks in nine playoff contests, but with the huge contracts given to players at equal to or beneath his level of play this spring, the Patriots were not going to re-sign him after the 2016 season. Jones was scheduled to earn $7.79 million as part of the fifth-year option on his rookie contract.

That is no longer in the cards and in getting an interior offensive lineman and an additional 2nd round draft pick, it is a no-brainer for Bill Belichick and the Patriots.

Regardless of the Long situation, the trade doesn’t leave the cupboard bare for New England with the team still boasting DE’s Rob Ninkovich, Jabaal Sheard (arguably their best DE in 2015), and last season’s draft picks Geneo Grissom and Trey Flowers on the roster.

Cooper was a first round draft pick for the Cardinals in 2013. He should immediately contend for a starting role and is especially valuable with the news that last season’s draft pick Tre’ Jackson had off-season knee surgery.