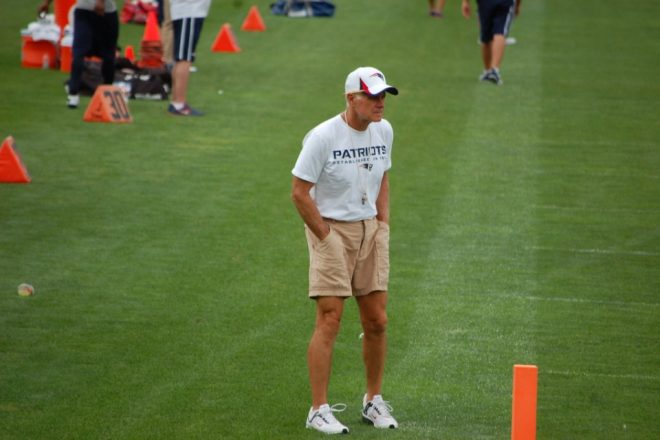 The Patriots have an opening on their coaching staff for an offensive line coach after coach Dave DeGuglielmo’s contract wasn’t renewed after the 2015 season.

DeGuglielmo replaced a legend in Dante Scarnecchia who retired after the 2013 season after a 32-year NFL career, 30 of which where he was a member of the New England Patriots. He spent his final 15 seasons as the Pats OL coach.

Now Mike Reiss from ESPN is reporting that the team is in contract talks with bringing the legend back into the fold at his old position. While fans are rejoicing at the news, perhaps it isn’t the best choice long-term for the team or Scarnecchia. But for the time being, this will work just fine thank you very much.

Granted, no one is a better OL coach for this team than Coach Scar, who filled his retirement time with helping the team scout future offensive linemen and was actively involved with the draft. He was the lead man on the Patriots drafting Bryan Stork and Tre’ Jackson from Florida State, Shaq Mason from Georgia Tech and David Andrews from Georgia.

He knows these players better than anyone, their strengths, weaknesses and how they can be best utilized. Plus, he’s always gotten the very best out of his linemen. One of the enduring images of Coach Scar is watching him run the wind sprints at the beginning of practice during training camp with his players. No one worked harder nor expected …and got more from his players.

So while the short term box is definitely checked, what does this mean long-term?

Scarnecchia who will turn 68 on Valentine’s Day, retired for a reason. He was obviously tired of the grind and at 66 two years ago, was ready to step back and enjoy his time with his family. He remained in contact with the team however and as we mentioned, did the scouting for the Patriots on several members of the current roster.

The only questions really would be, did the two years off recharge his batteries and his desire to return to coaching? Or is Scarnecchia just being a good soldier and is answering the call, running to the sound of the guns as an old war horse is apt to do.

The best case scenario would be to have Scarnecchia work with the team this season and then help them find a suitable long-term offensive line coach, someone familiar with their offense and the players to find what would work best for how they’re currently constructed.

Bill Belichick knows his value, at the time of his retirement, he said, “In an industry of constant change, Dante remained a fixture here for the simple reason that he helped every player reach his highest potential, regardless of who he was, how he was acquired, or how much raw talent he had. In whatever category a coach can be assessed … evaluator, teacher, motivator, problem-solver, disciplinarian, team player, winner … Dante is as good as it gets.”

So for 2016 at least if they can get a deal worked out, the Patriots will have one of the very best position coaches ever, back in the fold. And if they have issues this season on the offensive line, coaching won’t be the reason.