7 years ago at 6:43 am ET
Follow @SteveB7SFG
Posted Under: Patriots Commentary

The NFL has this little game on Sunday and they’re pulling out all the stops for it. Seriously the Super Bowl is about to go down in Santa Clara, CA and with it being the 50th anniversary of the contest it promises to be a star-studded affair.

As part of the lead up to the game itself, the league is planning on honoring all 43 of the MVPs on the field in a ceremony prior to the game. Commissioner Roger Goodell sent letters inviting them to be part of festivities.

That invitation included one Tom Brady who has been a Super Bowl MVP three times. In what had to be one of the more bizarre scenarios of his regime, Goodell cites Brady’s “enduring legacy” and thanking him for what he has “contributed to our great game,” in his letter. This was just before suspending the Pats QB for four games for not understanding the ideal gas law while protecting the “integrity of the game.”

Brady for his part was touched by the invitation and showed that in a Facebook post at the time, saying it was an honor and that he hoped “that I have my helmet on for the ceremony in SF”. 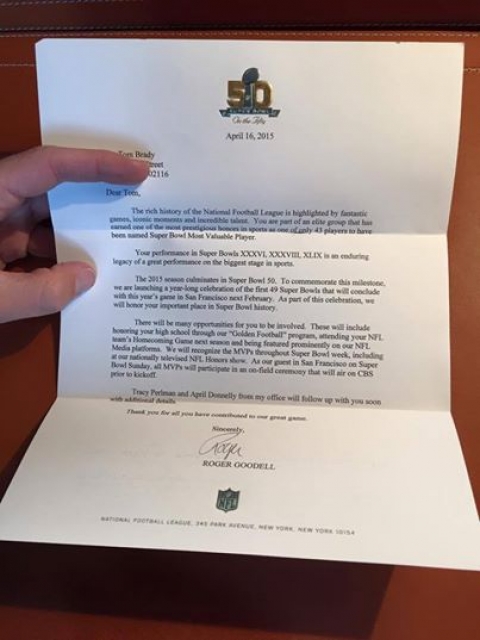 But then followed the ridiculous Ted Wells Report, the suspension and the court battle which Brady won. So will he go and walk out for this glorified dog and pony show or will he stay home and watch it unfold on television.

The national media who roasted Brady’s character over the supposed Deflategate scandal, is already chomping at the bit, looking for another excuse to lambast the superstar QB over not attending.

Even local pundits are joining in, Bob Ryan, one of the most respected of Boston sportswriters said on CSNNE Sunday, “He’s got to go and show some class,” Ryan said.

“He may even have some fun. He may even have a quick one-liner for the commissioner. Seriously, take the highest road possible. That’s my advice to Tom Brady. Get out there.”

If Brady decides to attend the Super Bowl fine, it is in his hometown and he may decide that his attending isn’t about him or even Goodell but about the legacy of the game itself and rightfully take his place among those before him.

But if he doesn’t, and feels that he won’t be appearing for this commissioner, especially after the way the league went out of its way to slander his reputation and his “integrity”, while basically flipping off the Commish, that’s fine too.

Heck, he can even decide to spend time with his wife and kids, after all he spends from July to January engrossed in his work and he spends precious little time with them during the season as it is. The bottom line is…it is Brady’s decision. His and his alone and the press shouldn’t (but will) have anything to say about it. The bottom line is he’s earned the right to do whatever he feels is the right path and none of us should question that.

Before everyone jumps on Brady for not attending, if indeed he does choose not to go to San Francisco, remember this isn’t without precedent. Before Super Bowl 40, the league opted to do much the same thing, having the MVPs march out to be recognized prior to the game.

But QBs Terry Bradshaw and Joe Montana, the only other QBs to win four SBs both opted to stay away. Montana asked for $100,000 as an appearance fee but the league offered only $1000 in expenses. Both Montana and Bradshaw deny that their snubbing of Goodell’s earlier show had to do with money.

Montana said he wanted to attend his son’s basketball game and Bradshaw stated he wanted to spend time with his family. So before the Brady bashing begins, think about that one for just a second.

Brady may just waltz out there and flash his four Super Bowl rings, tear open his jacket to reveal a Superman shirt and do the Ray Lewis dance across the field as he’s introduced.

Whatever he decides to do, it will be his call and let’s just for once, leave it at that.