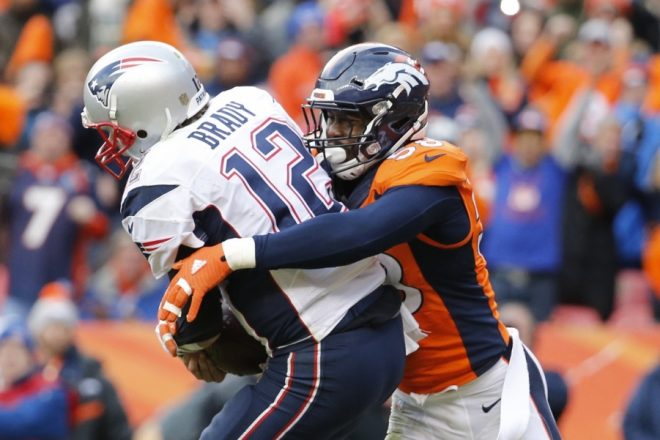 When the Patriots look back on Sunday’s loss in Denver, they’re going to likely be frustrated by the fact they squandered a tremendous defensive effort in a game that was lost on the plays they simply didn’t make on the offensive side of the football.

Despite having everyone healthy on offense, the Broncos were able to cut the head off of New England’s passing attack by blowing up the Patriots’ offensive line with a four man rush, which caused a lot of problems up front.  They were never able to find an answer, and the result was Denver spending the afternoon beating up on quarterback Tom Brady, which shut down an offense that had never lost a playoff game with both Rob Gronkowski and Julian Edelman out there together at the same time.

The Broncos absolutely pummeled Brady, sacking him four times and hitting him a staggering 20 times, which according to NFL.com’s Marc Sessler is the most of any quarterback all year in either the regular season or playoffs.

They were relentless and Brady was under duress the entire game, with little to no time to get the ball out and the results were painfully obvious.  As New England limped off the field trailing 17-9 at halftime, Brady had completed just 9-of-20 passing with two interceptions, with a dismal quarterback rating of 18.1.  They had converted just 1-of-7 on third down, with Brady completing 0-of-3 attempts with an interception.

“It was a tough day, man, a tough day,” said Brady after the game.  “A hard fought football game.  They have a very good defense, they played well all season, they’ve got good coverage, they’ve got a good rush, they put a lot of pressure  on you.”

It didn’t get any better in the second half as the Patriots altered their protections to try and limit the Broncos getting to him but they still kept getting through.  They kept Brady under constant duress, disrupting a passing game that was never able to get in sync and stalled badly on several occasions, including two key fourth down attempts in the fourth quarter in the red zone where they came up empty.

Meanwhile, despite all the problems the offense had, the defense held up extremely well in an incredibly tough and hostile environment.  They completely shut Denver down in the second half, allowing just three points but couldn’t get any support from their own offense which had the firepower to get it done, but was badly let down by an offensive line that couldn’t stop the onslaught that came after Brady nearly every down.

Their one second-half defensive mistake came in the fourth quarter when C.J. Anderson slipped through the defense and picked up 30-yards, taking the ball from the Broncos’ 48-yard line down to the Patriots 22.  Six plays later they kicked a field goal, putting Denver up 20-12 which ultimately proved to be the difference in the game.

Under any other circumstances, holding an opponent to three second half points should have meant a win by an offense that clicked so well last week and had their top players in the line-up.  Unfortunately as good as the Patriots were, the Broncos were that much better and the lead they built up in the first half ended up being too much for them to overcome.

It’s a frustrating end to a year that started off with a lot of promise, but sometimes that’s the way it goes.  But the Patriots can walk away knowing that they’ll take with them a pretty solid foundation on the defensive side of the football heading into 2016.

How Was This Article?
Posted Under: 2015 Patriots Season

By: Mark Morse
Shame that such a strong effort ends up with the Patriots coming up short.
25 mins ago