7 years ago at 1:44 am ET
Follow @IanLogue
Posted Under: Patriots Transcripts 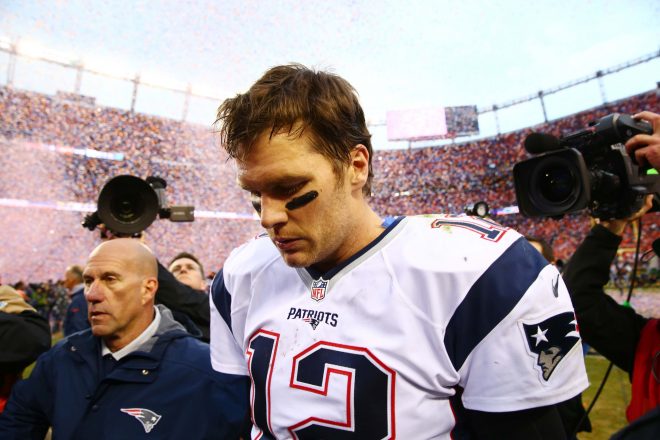 On how they were able to get so much pressure on him consistently:

On what he saw on the interception:

“Just a bad decision.  Gronk went inside of him and then was breaking out and I didn’t think Von [Miller] knew that, and he did, and he made a good play.”

On if the rushed more than he expected:

“They rushed more often than not, but those are the things that quarterbacks have to see.”

On what kind of disruption they caused:

“It was a tough day, man, a tough day. A hard fought football game.  They have a very good defense, they played well all season, they’ve got good coverage, they’ve got a good rush, they put a lot of pressure  on you.  We made a lot of plays, there were a lot of plays we didn’t make.  A lot of fourth down plays that ended up costing us.  We made a couple, but again, there were too many of those and we never could play with the lead, we never could play on our terms. So it was an uphill battle all day.”

On the fourth down plays and the two point conversion, they’re normally so good with those and what was the problem today:

“I think you make some, you’re not going to make them all.  I mean, I think we hit the fourth-and-ten to Gronk, we hit a fourth down for the touchdown, I just don’t think you’re going to be 100% in those situations.  Unfortunately we had four or five of them that just didn’t go our way and they cost us points and cost an opportunity to move on.”

On the fact they came in at halftime frustrated and what helped them turn it around in the second half:

“We were all pretty happy we were still in the game based on the way we played offensively, we just could never really get into a rhythm with what we were doing.  It was just a tough, hard fought game.  I think they did some good things defensively.  We had some plays offensively we should have made and we just didn’t make them.”

On with them getting to him so quickly, how much it affects his internal clock when he does have time to throw:

“I think you get into some rhythm out there and then when you do have time you’re still in that quick rhythm and there were definitely times where I had opportunities to hold the ball and didn’t really have great awareness of where people were around me, maybe some times I had more time.  So I’ll look back on all those plays and it’s a disappointing loss because this team fought pretty hard just to come up short on a two point play.  It would have been a fun overtime had we had the opportunity, but we just came up one play short.”

On the play where he got hit pretty hard in the second quarter after he made a throw:

“It’s football.  I think there were a lot of plays I got pretty hard today.  So it’s just football…just football.”

On what he says to his offensive line facing Denver’s front after being hit all day:

“They hung in there all day.  I mean I think that’s the strength of their team and I think our strength was trying to get the ball to our skill guys and let them make some plays in space.  It’s a tough front, I mean, they’re good players.  They were teeing off on the cadence, we were trying to keep changing it up.  On defense sometimes you’ve just got to get one play and you end the drive.  I think they did a great job today.”

On how long it takes before he’s able to process that they were so close:

“It’s pretty special to play in this game, I mean, obviously to advance to the next game is, that’s why we all play and work so hard.  So it’s disappointing not to have the opportunity to do that.  It takes a lot of good football to do that and to beat some great football teams and we lost to a very good football team today.  I wish that two point play would have been different, I’m sure everyone can look at different plays throughout the game when it’s that close and say, ‘Man, I wish I had made that play.’  But I’m proud of the way we fought, I mean, we certainly fought to the end.”

On the fact Stephen Gostkowski is beating himself up about that right now:

“He’s a great player.  He’s the best.  I mean, everyone misses them at some point and there was plenty of football left.  We knew what the situation was.”

On Gronkowski coming back and making those plays:

“He made two great plays, both on fourth down.  He split the defense, they were trying to double him and he ran right through it.  And then the touchdown, I still don’t know how he caught that ball.  I was kind of retreating, retreating, trying to buy time and just saw him break out, and let it go.  So it was a great play.  He toughed it out all season, so I’m proud of him.  He’s a great player.”

On if he can feel good about Peyton Manning after everything he’s been through this year:

“They’ve got a great team so he’s a great player, someone I’ve always admired.”

On the throw back pass to Edelman on the fourth down play, if that was the playcall:

“They were looking for the sneak and then we tried to do a misdirection.  It wasn’t really Julian’s guy that got him, it was the guy that fell off, so he made a pretty good defensive play.  He had the other guy in man coverage and was just kind of there waiting for it.”

On if the pressure in his face reminded him of the Giants in the Super Bowl:

“That was a little different.  This was a different game and I think when you play quarterback you’re going to take hits and you’ve got to stand in there and make the throws.   There’s no excuses for not getting the job done.  I think our guys fought hard, I’m proud of all the guys for what they tried to accomplish today.  Like I said, we just came up one play short to a very good football team.”

On if after a kick gets missed or a pass gets picked, if you can stop yourself from thinking, “that might come back to haunt us”:

“Yeah, there’s plays that are being made back and forth.  So, you’ve got to move on from those, I think we did a good job of that today.  We had some good momentum there in the fourth quarter.  We were moving the ball, we just didn’t quite get it in when we needed to.”

On if their approach defensively matched their tendencies:

On what he’ll do next, if he’ll get away from the game or if he’ll pay attention to the Super Bowl coverage:

“Yeah, I’m not sure, so I don’t know.  Get over these bumps and bruises, that’ll be the first thing.”

On what he’d say to the fans who have supported him through thick and thin:

On after all he’s gone through, how disappointed he is not to get a chance to win back-to-back Super Bowls:

“Well, I want to win it every year.  I’d love to finish in the last game of the year and win it.  It’s a pretty tough thing to do.  Hopefully I’ll have more opportunities for that.  This team fought really hard, we just came up short in the end.”