7 years ago at 8:40 am ET
Follow @IanLogue
Posted Under: Patriots Commentary 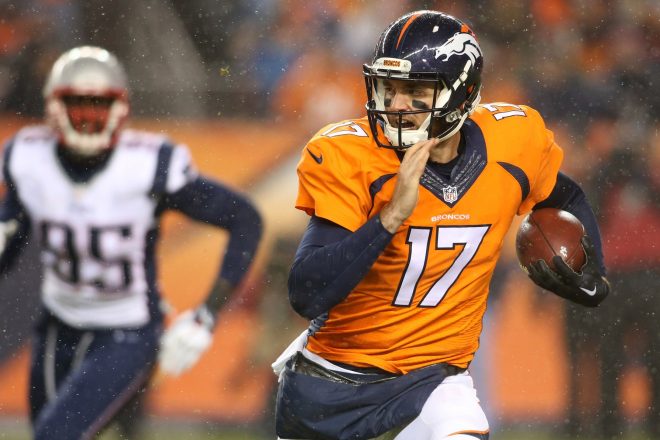 After watching how the AFC Divisional playoff round went down against the Steelers, it wouldn’t be a surprise if Peyton Manning isn’t the only quarterback throwing passes this weekend for the Broncos when the Patriots face off against Denver in the AFC Championship game.

And don’t be surprised if Bill Belichick spends more time than you’d expect getting them ready for that exact scenario.

During their last meeting in Denver back in Week 12, the Patriots managed to put up some early points on the Broncos and build an early lead, taking a 21-7 lead into the fourth quarter before miscues and an injury to Rob Gronkowski played a role in it all falling apart in a frustrating 30-24 overtime loss.

A lot has changed since that game.  With the stakes much higher this time around and a healthier group on offense for New England set to be part of the rematch, if Sunday’s game between the Broncos and Steelers is any indication, New England will likely be preparing for two quarterbacks this week.

With a trip to the Super Bowl on the line and the fate of their season in the balance, there’s probably a good chance that should the Patriots build another big lead against Denver this weekend, Broncos head coach Gary Kubiak could be forced to make the difficult decision to yank Manning from the contest and insert Brock Osweiler, which could potentially reverse the process that put Manning back in the driver’s seat to begin with.

Osweiler’s early struggles in the season finale against the Chargers prompted Kubiak to switch quarterbacks early in the third quarter, after two first half interceptions along with a Broncos fumble just two plays into their drive in the second-half helped setup a San Diego go-ahead touchdown.

With a shot at the top playoff seed hinging on that game and Denver trailing 13-7, Kubiak put Manning in the game and the veteran was able to ignite the team and lead them to a come-from-behind win, locking up home field throughout and putting them in the position they’re now currently in.

However, against the Steelers it was painfully obvious that Manning is still having a hard time throwing outside the numbers and the Broncos struggled, with kicker Brandon McManus hitting five field goals while the rest of the offense managed just one offensive touchdown.

Against Pittsburgh, that was enough to advance.  Against Tom Brady and the Patriots’ offense, it likely won’t be.

In their previous match-up, Osweiler had his moments.  He’s got a great arm and has no issues making some of the tougher outside throws and did a good job getting the ball down the field on several occasions, which resulted in some big gains against New England’s defense.  That’s something Manning really can’t do as well at this point, which severely limits Denver’s offense and could be a big problem.

As a result, if the Patriots are able to get ahead early and their defense is able to frustrate Manning and make the Broncos offense look like it did this past weekend, it shouldn’t be a surprise if Kubiak makes a move again to try and provide another spark for his football team.

Belichick admitted as much on Monday that he’ll need to have his team prepared for either player.

“[They’re] both good players obviously,” said Belichick during his conference call Monday.  “We’ve had trouble with both of them so we’ll have to be ready for both guys.”

It’s simply one extra thing they’ll need to worry about as they try and clear another hurdle and win another AFC Title.

READ NEXT:
Are the Broncos Targeting Gronkowski’s Knees on Sunday?
Posted Under: Patriots Commentary