6 years ago at 11:05 am ET
Follow @SteveB7SFG
Posted Under: Patriots Commentary

The Patriots offensively were looking much more like the team that steamrolled thru the first 10 games in the season than the one that slept-walked thru consecutive losses at the end of the regular season in New Jersey and Miami.

After re-watching the game a few times since Saturday afternoon, it is apparent that the return of Julian Edelman was a huge key for the Pats offense in their 27-20 victory over the Kansas City Chiefs in the Divisional Round. His presence in the short passing game garnered a lot of attention from a good KC secondary.

As a result, they were able to move the chains effectively especially on third down. Prior to Edelman being hurt the Patriots were humming along with 54 of 107 being converted on third downs. Once he was injured that percentage plummeted to 34 of 108. On Saturday against a good KC defense, the Pats converted 6 of 12. Coincidence? Not hardly.

An even bigger factor of having Edelman back is teams can’t overload on covering Rob Gronkowski and he was extremely effective on Saturday with seven catches for 83 yards and two big touchdowns. Edelman shook off the rust (?) to the tune of 10 catches for 100 yards. Moving forward, this unit will not be easy to stop.

So let’s take a look at some of the biggest plays of the day. Some good and one where the officials might have missed…

Gronk 32-Yard Catch: On the Pats opening drive they faced a 3rd and 13 from the KC 43-yard line. The Patriots go to a four-wide look with Gronkowski in the slot on the left. Brandon Bolden in the deep back lined up next to Brady on his left, ostensibly to pass block. 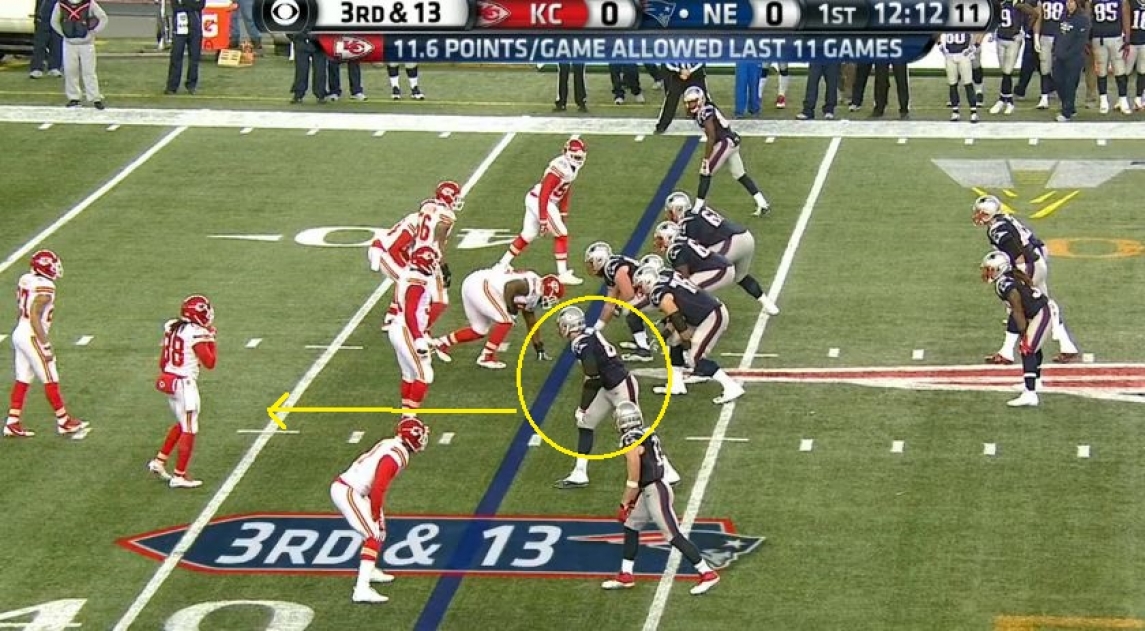 KC is showing a different look with just on down lineman and four players standing near the line of scrimmage. The safeties are creeping up into the box, possibly showing blitz.

At the snap Gronkowski runs a deep dig to the middle of the field and then cuts back to the left where once Brady hits him with the ball, he has a lot of room to run. He rumbles for 32 yards setting the Patriots up at the 11-yard line for a first down. 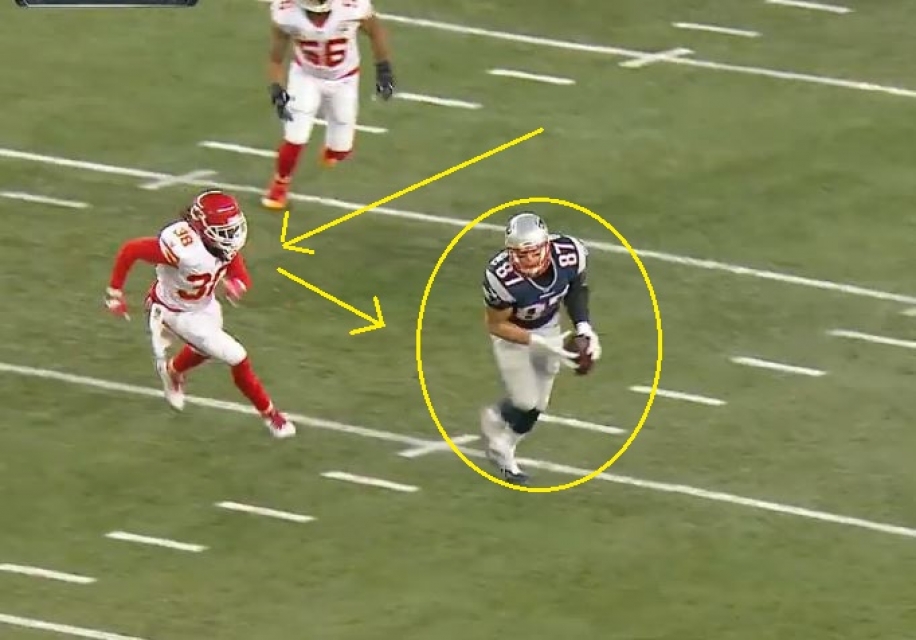 Gronkowski 8-Yard Touchdown: On the same drive, facing a 3rd and 7 from the 8-yard line, Brady once again spreads the Chiefs wide. Edelman in the slot on the left runs a slant to the middle. James White is the lone back this time to Brady’s right. Amendola and LaFell are lined up on the right. 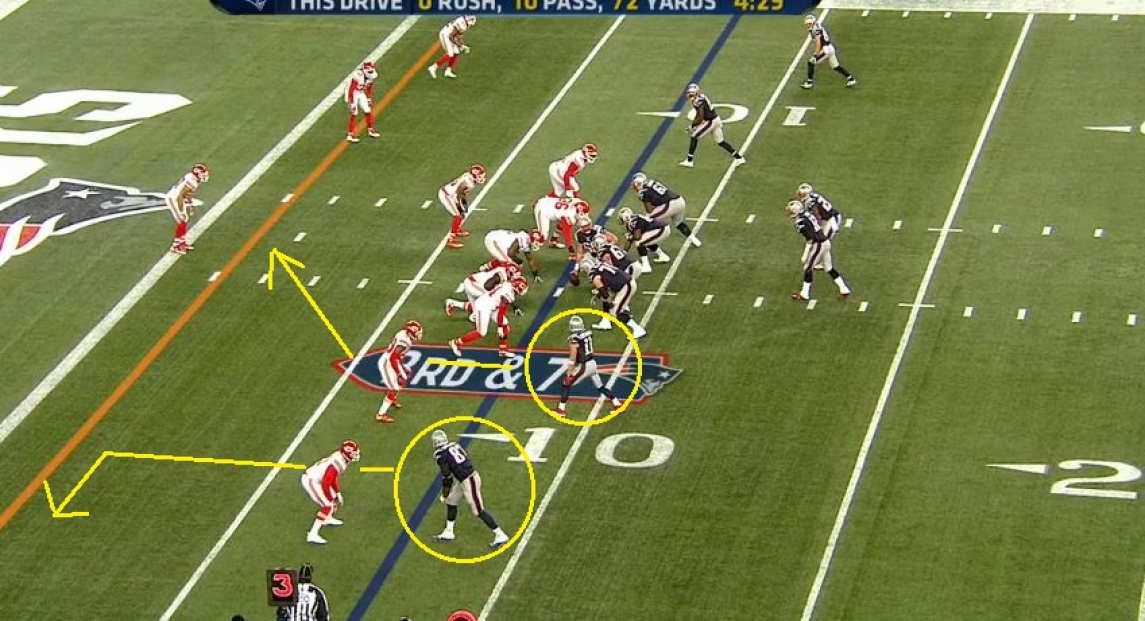 This leaves Gronkowski with single coverage with CB Sean Smith on the outside on the left. He has the size mismatch and Gronk runs a deep out and boxes Smith out where Brady throws a perfect pass to Gronk’s outside shoulder where Smith has no chance to stop it. An easy touchdown and a great start for the offense. 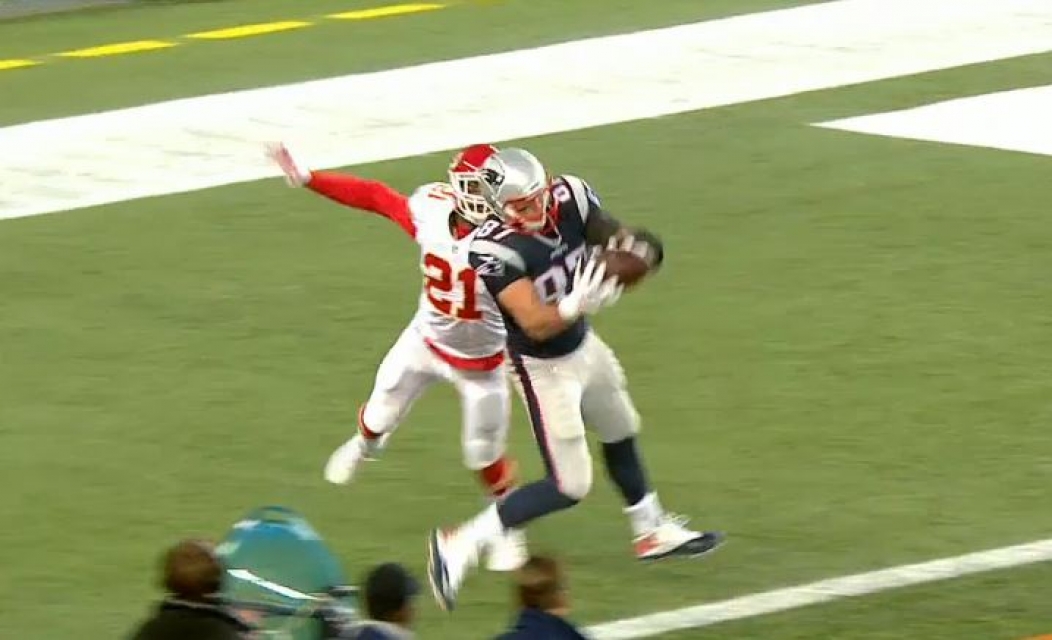 Gronkowski 16-Yard Touchdown: Later in the third quarter after the Chiefs turned the ball over the Patriots moved down to the KC 16-yard line. There they faced a 1st and 10 where Brady again spread out the defense.

With three wide right and Edelman in the slot, he ran a short cross drawing the defense and the safeties to move down to try to limit his room to maneuver. Gronkowski this time was lined up wide left with just a safety in coverage, this time Eric Berry. 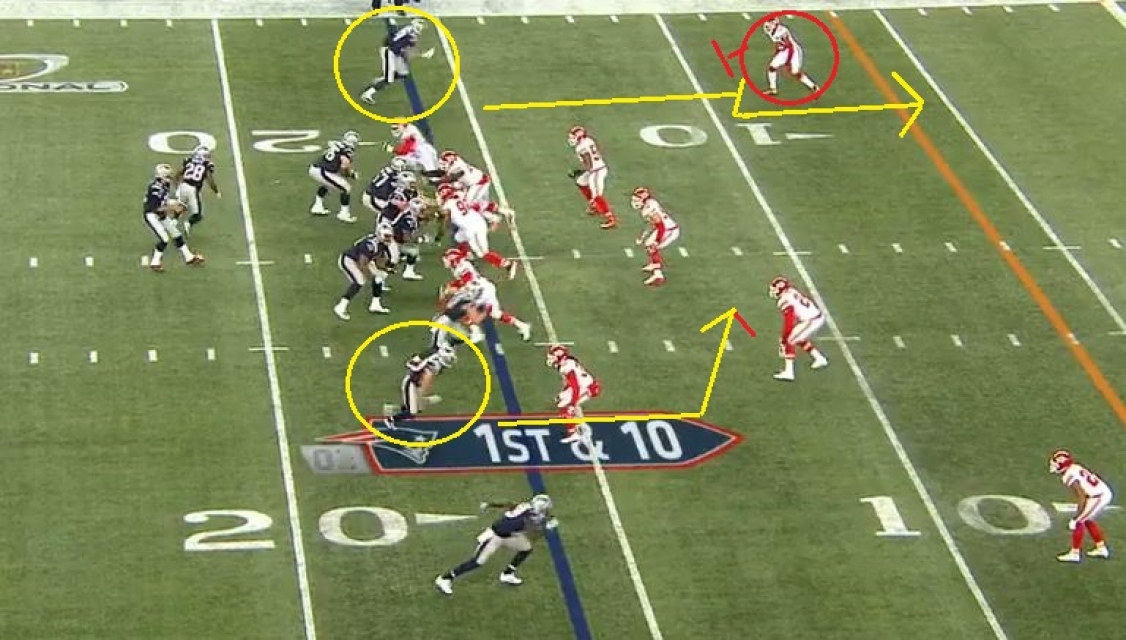 James White was the lone back to Brady’s left. At the snap Gronkowski ran a six-yard route and stopped as if on a comeback route. White floated out in the flat and the linebacker who would have been in the throwing lane for Gronk’s comeback had to move up to take him. Berry took the bait and flew up to contest the throw. Brady pumped faked and Gronkowski turned and beat him easily for a touchdown lob from Brady for six. That put New England up 21-6 and was a huge shift in momentum. James White 29-Yard Catch and Run: Another big play in the passing game was later in the game and featured running back James White. They were facing a 2nd and 1 from the 31-yard line after a nine-yard pass to Edelman on first down. Again, the Patriots were spreading out the KC defense with three wide right and only Brandon LaFell to the left. Edelman was wide right, with Amendola inside of him and Gronkowski in the right slot. 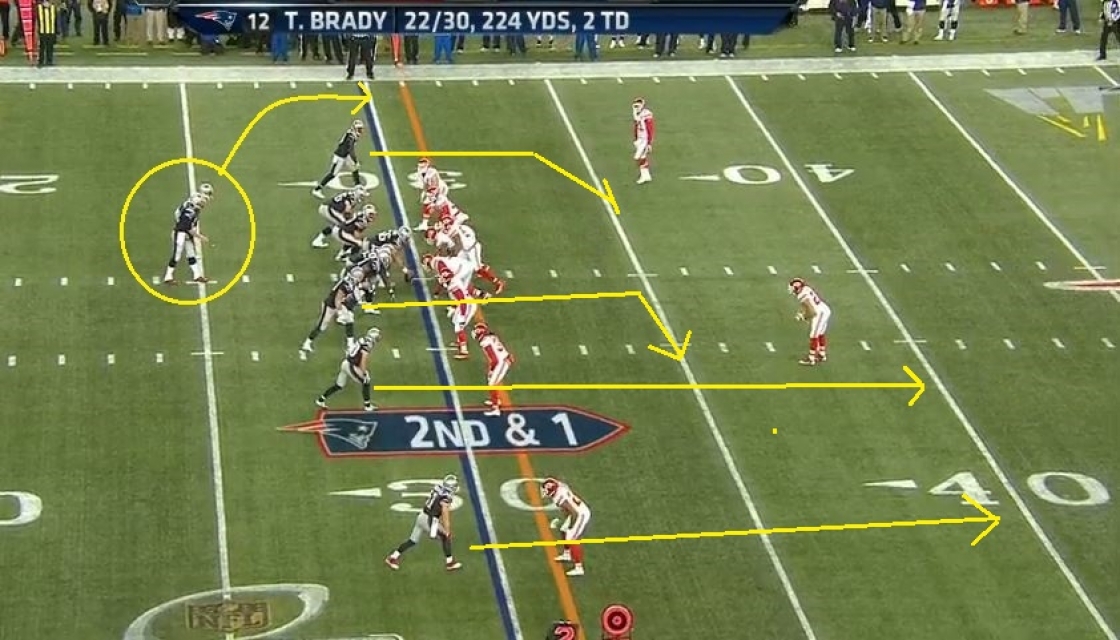 At the snap LaFell ran a dig route to the inside from the left, and White floated out to the flat and caught a short flare from Brady that was open due to LaFell drawing his coverage inside.  White had an easy first down and one man to beat, which he used his speed to do so and had a lot of room to run due to Gronkowski and Edelman drawing the lion’s share of coverage to the right side. He raced down the sideline and gained 28 yards after the catch for a big gain. 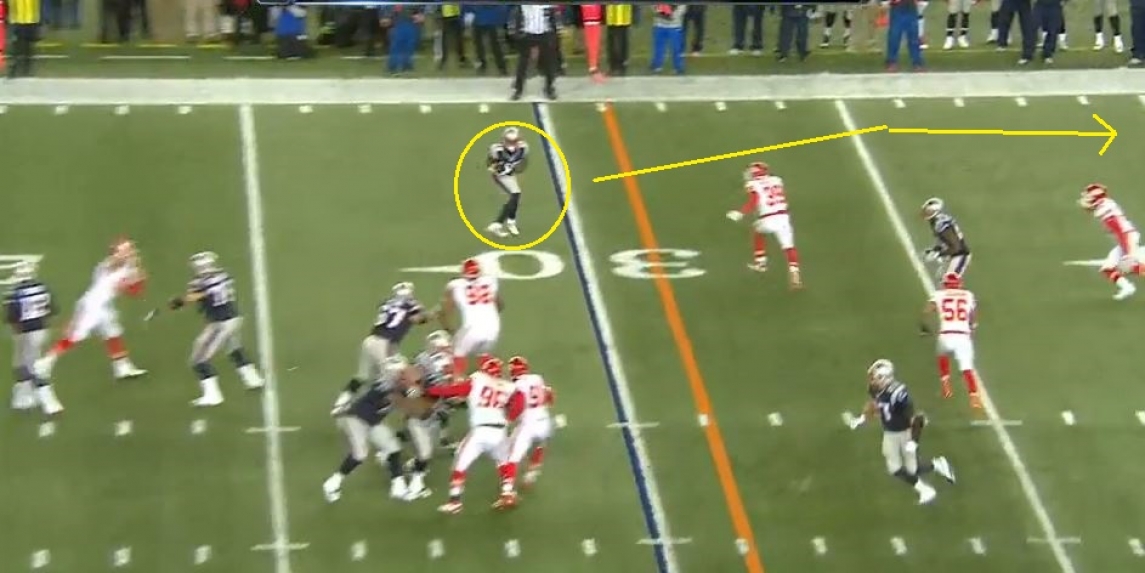 No-call on Edelman: Here’s the one that got away; facing a 3rd and 6 from the KC 13 and a half yard line, Brady had the Patriots in a five wide spread. Edelman and Amendola were split wide right, Gronkowski, LaFell and James White in the slot were split wide left. At the snap Amendola crossed behind Edelman to run a short out route. Gronk ran a post. Edelman tried to beat Marcus Peters to the corner running straight down the sideline. Peters makes a lot of contact at the goal line well after the five-yard rule and grabs two handfuls of Edelman’s jersey. The ball fell incomplete but at a minimum should have been an illegal contact call and with the ball in the air should have been a Defensive Pass Interference. Brady did have Gronkowski in the middle for a first down but wouldn’t have gotten much more as there was a safety right over the top of him. But he was going for the kill shot. With the non-call, they Patriots had to settle for a field goal.

The Patriots offense is in much better shape going to Denver for this go around as they have both Edelman and Amendola who were out the last time. This should be a great matchup which we’ll have much more of soon.

We’re on to Denver…