7 years ago at 7:45 am ET
Follow @bob_george
Posted Under: Patriots Commentary 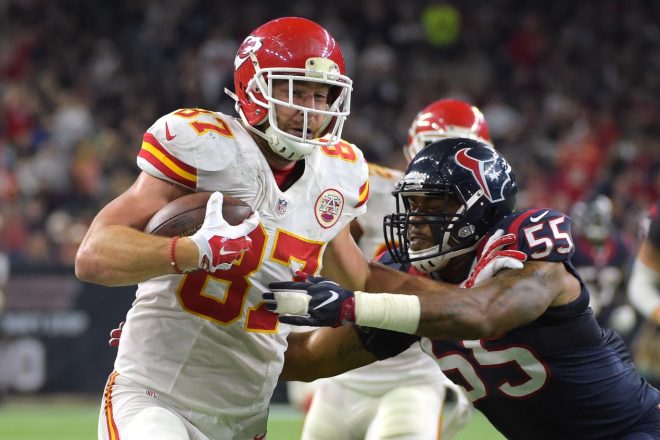 Both Willie Nelson and Canned Heat recorded songs entitled On The Road Again. They both achieved cult status.

The NFL should pick one of those versions and adapt it as their new theme song. After the 2015 Wild Card weekend, home teams ought to be ashamed of themselves. For the first time in league history, all four road teams won in a postseason weekend. What it means is subject to debate, but as mentioned in a recent article, the NFL playoffs system is a good, albeit flawed, system, and the “flawed” component was exposed this weekend.

On Sunday, the two NFC Wild Card games featured wins by the road team just like the Saturday AFC games did. On a bitter cold day in Minneapolis (coldest in Vikings history, third coldest in NFL history), Seattle and Minnesota battled in a tight defensive struggle. The weather was much more balmy in Washington, as the Redskins hosted Green Bay in the other NFC matchup.

Vikings’ kicker Blair Walsh hit three of three field goals, kicks that must have felt like kicking a boulder on such a cold day. It was 9-0 Vikings heading into the fourth quarter. But a fluke 35-yard pass completion from Russell Wilson to Tyler Lockett set up a touchdown, and a critical fumble by Adrian Peterson led to a field goal. It was 10-9 Seattle, and that score held going into the final two minutes of the game. Teddy Bridgewater, who failed to produce a touchdown this afternoon, quarterbacked the Vikings into a position to win the game. Walsh was lined up for an easy 27-yard field goal with 17 seconds left to give Minnesota the win.

Walsh kicked three field goals from 22, 43 and 47 yards. He needed one more, from 27. He didn’t get it, yanking the kick wide left. Seattle could not believe what it just saw. Neither could the stunned Viking fan base. Head coach Mike Zimmer refused to offer comfort to his kicker, stating bluntly that he “should have made the kick.” The missed kick sent Seattle to Carolina next week for the Divisional round, giving Pete Carroll some cathartic relief from his lousy play call in last year’s Super Bowl.

The matchup between Washington and Green Bay was the NFC equivalent of the Houston-Kansas City game in the AFC, the four versus five matchup. The Redskins were champions of a substandard NFC East division, albeit not nearly as bad as the AFC South, but still a very weak division in 2015. Consequently, the Packers, despite falling behind in the first half, defeated the Redskins pretty easily at FedEx Field, 35-18. There was no mystery or excitement in this game; other than Aaron Rodgers getting sacked in the end zone to give Washington an early 2-0 lead, the Redskins didn’t show a sense of domination and succumbed to the Packers once they got untracked. Green Bay now heads to Glendale, Arizona to take on the Cardinals next weekend.

Once again, the debate will come up. Should the playoff system be changed?

If you go back and research the playoff seeds over the last several years, you might find out that the “worst” team in the field of six per conference is the four seed and not the six seed. That was certainly the case this year. As Pittsburgh and the New York Giants have shown, a six seed can be a very dangerous team. In many cases, the five and six seeds in the conference can indeed be teams the higher seeds would like to avoid.

This year, you had Houston, champion of a very weak AFC South, and Washington, champion of a rather weak NFC East. Washington managed to prevail amongst a division of good teams in down years or with issues that aren’t necessarily chronic. In two cases, head coaches departed (Chip Kelly, Tom Coughlin), and Dallas was helpless without Tony Romo. That left Washington, and even the Redskins had its issues with the quarterback situation. The Skins now face the daunting decision to let Kirk Cousins go as a free agent and hope that Robert Griffin III can resurrect his fractured career, or vice versa (sign Cousins, release Griffin).

The AFC South is another story. Indianapolis is a mess, yet that team decided to retain both its head coach (Chuck Pagano) and its general manager (Ryan Grigson). Andrew Luck remains the franchise’s most valuable asset, but his supporting cast is nothing close to what Peyton Manning had in his heyday in Indy. Both Jacksonville and Tennessee need a ton more material than just their young quarterbacks (Blake Bortles, Marcus Mariota). Tennessee once again will have a top two pick. The Jags and Titans are destitute teams that need a lot of rebuilding.

Houston, meanwhile, managed to win that division despite no Arian Foster and a revolving door of quarterbacks, most of whom used to be understudies to Tom Brady. Neither Brian Hoyer nor Ryan Mallett distinguished himself. Brandon Weeden was needed in Dallas to replace Romo, but instead they wound up turning to Kellen Moore and another Brady understudy, Matt Cassel. The only quarterback Houston could count on for playoff pedigree was T.J. Yates, but even he went down with an injury.

Despite these division shortcomings, Houston and Washington still made the playoffs and got to host a home game. The New York Jets would have been a much better team to replace Houston in the AFC, whereas the only problem in the NFC was seeding Washington ahead of Green Bay and Seattle. Both the Packers and Seahawks had more wins than Washington, and both won on Sunday. One could say “Why change anything, the better teams won anyway!”, but again, this was the first time in league history that all four road teams won in a postseason weekend.

The thing is, if you want to change, what do you do? Take away the impetus to “win the division” and just take the top six teams based on record? MLB did something interesting a few years ago, by adding a second Wild Card team in each league and having the two Wild Cards play a one-game play-in game, with the winner playing in the Divisional Series against the top playoff seed, with the top seed having home field advantage. This put extra emphasis on winning the division and not just getting in as a Wild Card. Leaving the Jets out of the playoffs is a misfortune (so called, nobody loyal to the Patriots minds this one bit), and allowing Houston and Washington to host a playoff game is not really cricket. But next year, it might be other divisions that suffer down years.

The bottom line is that the playoff system is what it is, and if you get shortchanged, sorry, but that’s the way things go. In 2008 Cassel led the Patriots to an 11-5 record, but the Patriots missed the playoffs because all their five losses were to teams that beat them in tiebreakers. Oh, well. Win those games and don’t get burned by tiebreakers. That’s the solution, not to re-do the system. Like it or not, the sanctity of the division champion should be preserved. Any team that thinks it has a good enough record to make the playoffs and then doesn’t is simply guilty of not winning enough games, period.

Now, to make everyone in Denver, New England, Carolina and Arizona sleep well tonight. Home teams are 0-4 in the playoffs right now. The Patriots are 4 ½-point favorites over Kansas City, and Denver is a touchdown favorite over Pittsburgh. Las Vegas, get ready for those bettors ready to dump big bucks on the roadies.