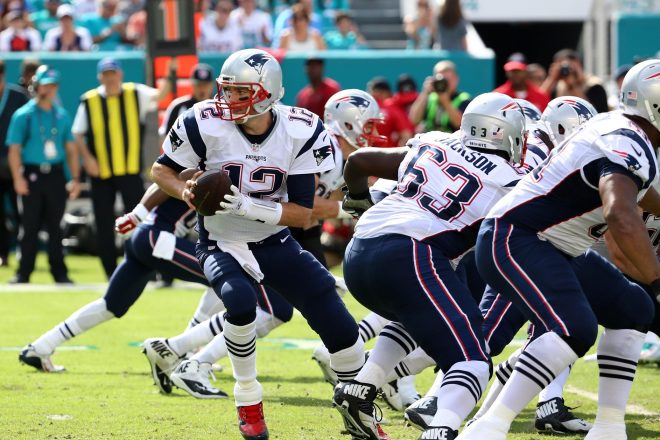 MIAMI GARDENS, Fla. – Home field is overrated. Today was practically a preseason game. Work on the running game. Eventually we’ll be on to Santa Clara.

In the actual postgame press conference, Bill Belichick mumbled the sentence “We got a lot of work to do” over and over again, which probably could be substituted for any of the sentences in the first paragraph. Tom Brady actually smiled and chuckled during the end of his presser. When the Patriots took the field at SunLife Stadium on Sunday, they looked like a team that just wanted to go through the motions, not worry about the game, just work on a few things and hope no one gets hurt.

The Patriots wound up losing a game that no one on the planet outside of Dolphin headquarters thought they could possibly lose. Miami came away with a 20-10 win against a woeful Patriot team which spent the first half trying to run the football and the second half never getting into a rhythm on either side the football. Combined with Denver’s 27-20 win later in the afternoon against San Diego, the Patriots had to settle for the two seed in the playoffs with Denver claiming the one seed. The Patriots went 2-4 over their final six games, never a good thing going into the playoffs.

The Patriots still get their week off followed by a home playoff game. They will either get Cincinnati or the winner of Kansas City and Houston. If Belichick’s real reason for kicking in overtime last week was to appease the conspiracy theorists and help knock Pittsburgh out of the playoffs, that strategy went out the window as the Jets gagged their season away at Buffalo, 22-17, and Pittsburgh knocked Gang Green out of the playoffs by winning at Cleveland, 28-12. Cincinnati will host Pittsburgh and Houston will host Kansas City next weekend. Pittsburgh goes to Denver if they win, so the Steelers are the only team the Patriots cannot face in two weeks.

Now, here’s the real interesting part. Belichick’s secret nightmare, if this be the case, can come true if Pittsburgh beats Cincinnati, then goes into Denver and Ben Roethlisberger throws 6-7 touchdown passes against the Bronco defense. Then if the Patriots can knock off (most likely) the playoff-challenged Chiefs at home, they would host Pittsburgh in the AFC Championship. So, Belichick would get home field back, but they would have to deal with the one quarterback they wanted to avoid along the way to Santa Clara.

The ironic part is that, despite losing 4 of the last 6 games, the Patriots could still host the AFC title game. And all of the above scenarios are not far fetched at all.

That being said, let’s just forget these last two weeks. The Patriots threw away last week during the overtime coin flip. They threw away this Sunday’s game during the first half, as the Patriots chose then to work on the run game instead of burying the Dolphins early with a passing assault and putting them into a “get on the bus” mode, then work the run game in the second half. But that’s what the Patriots did, and in the end Miami had a sense of hope they had no right to have.

The most glaring fact of this game is that only Steven Jackson and Brandon Bolden handled the football on the first 18 offensive plays for the Patriots, extending into the second quarter. The Patriots ran 16 runs and two passes, and one of the passes, a 20-yard dump pass to Jackson on their third offensive possession, helped set up a 34-yard field goal by Stephen Gostkowski to make it 3-3.

On their next possession, the Patriots ran six plays, and five of them were to running backs. James White got in on the fun gaining a net total of -1 yards (5 rush, -6 pass catch). Gostkowski yanked a 43-yard field goal wide right. The Dolphins responded by driving 73 yards in 8 plays, with Ryan Tannehill hitting DeVante Parker from 15 yards out to give the Dolphins a 10-3 lead at the half.

The one Patriot touchdown drive, the leadoff drive of the third quarter, was made possible thanks to, you guessed it, a running back. On the third play, White took a slant pass lined up in the right slot and wound up racing 68 yards to the Miami 6. Two plays later, Jackson (of course) rumbled in from three yards out to tie the game at 10-10.

The last six Patriot possessions were five punts and loss on downs. The Patriot offensive line played perhaps its worst game of the season, providing neither any effective run or pass blocking. Ndamokung Suh hit Brady on one play where the quarterback rolled his ankle and spent the rest of the game with a slight limp. The Dolphins themselves scored only 20 points facing a team with no offense and a depleted defense (both Dont’a Hightower and Chandler Jones were scratches). But the Patriots simply did not show up at all today.

The Patriots have to hope that the Broncos trip up in two weeks at home against either Pittsburgh, Kansas City or Houston. Despite being at home, Houston doesn’t figure to advance as Kansas City should have no trouble with them despite a long, multi-decade playoff losing streak. The Pittsburgh-Cincinnati game is a huge toss-up and will pretty much dictate how things will go. If playoff-snakebitten Cincinnati should win, they go to Foxborough and Kansas City/Houston goes to Denver. If Pittsburgh wins, they go to Denver and Kansas City/Houston goes to New England.

Which scenario should the Patriots root for? The team most likely to give Denver the boot would be Pittsburgh. Peyton Manning, who did finish the game on Sunday against San Diego, is always a crap shoot in the playoffs. Roethlisberger can light it up against anyone. If Denver and Pittsburgh should get into a shootout, Manning may not be physically fit enough nor have the poise to keep up with Big Ben, who has more rings than Manning.

And if the Patriots should manage to take care of the Kansas City/Houston winner and advance? Same as Denver. The two teams met in Week 1 and New England won a barnburner. It would come down to how well the defense fares against Roethlisberger.

But if Denver does win its home game and hosts the AFC Championship Game, the Patriots might once again be in for it. The Patriots have never won a playoff game there and most certainly would play just bad enough to not win, just like their Week 11 overtime loss this year.

As coach says, one game at a time. Let’s just let the Wild Card games play out. Then worry about who the Patriots will play when we really know who they will play.

READ NEXT:
When Will The Patriots Play Their First Playoff Game? Now We Know
Posted Under: Patriots Commentary