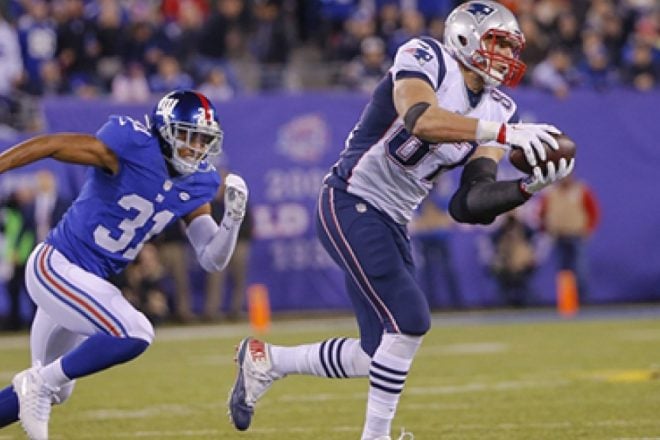 The Patriots need just one more win to lock up the #1 seed and clinch home field advantage for the playoffs (sound familiar?) but they’ll have to beat their old nemesis, the Miami Dolphins in South Florida to do so.

The Pats (12-3), lost in overtime to the Jets 26-20 last week as Ryan Fitzpatrick led Gang Green on a touchdown drive at the start of overtime. This week the stakes are high, either win in Miami and have home field advantage for the playoffs or face the prospect of possibly having to travel to Denver for the AFC Championship Game.

The Dolphins (5-10), are playing for pride and jobs at this point. They’ve been one of the bigger disappointments in the league this year. After spending big in free agency they’ve been a flop. They lost to the Colts last week 18-12 but would love to play spoiler for the Patriots.

Now it is time for our players to watch for this week:

Geneo Grissom: The Patriots third round draft pick (97th overall) has played sparingly in his rookie season due to the team being so deep with a three-man rotation of Chandler Jones, Rob Ninkovich and Jabaal Sheard in the mix.

But with Jones already downgraded to out for Sunday’s game and Ninkovich still in Foxboro and officially questionable to play, Sheard will be the starter on one side and Grissom and Akiem Hicks may split some time on the outside as the Patriots will possibly go at times with a big look on some downs.

That would leave them a rotation of Alan Branch, Malcom Brown, Sealver Siliga and Ishmaa’ily Kitchen on the interior of the defensive line. All three of Sheard, Grissom and Hicks have seen considerable time inside as pass rushers, now they’ll have to play outside.

Grissom has shown some promise in very limited action as a rookie, the talented and versatile 6’4, 265-pound lineman from Oklahoma will get a chance to shine on Sunday.

Key stat: In the first meeting back in October, Grissom played 19 snaps all at defensive tackle and in a pass rushing role. He broke thru his block early in the game and brought pressure on Ryan Tannehill. But the Miami QB escaped briefly but was sacked by Jones instead.

Ndamukong Suh: The talented but mercurial Suh has been a lightning rod for criticism this season as he’s mostly underachieved in his first season as a Dolphin after signing a  six-year, $114-million-dollar contract in the off-season.

Suh hasn’t fit well, especially early this season and his effort during the first month of 2015 was drawing questions. But he’s played much better down the stretch and has 12 tackles for loss in the running game, good for sixth in the NFL.

Suh has always played right up to and sometimes over the line in terms of dirty play, but if the effort is there on Sunday, he can be the kind of guy who can impact a game.

Key Stat: Suh has 5.5 sacks on the year, down from 8.5 a year ago but his teammate Olivier Vernon is enjoying the benefits of playing opposite him as he’s notched seven. If Suh is motivated to go on Sunday, he’ll draw a double team from the patchwork Patriots offensive line.

Rob Gronkowski: Gronkowski as always will be a focal point of the Patriots offense. With Julian Edelman out again and Danny Amendola questionable, he becomes Tom Brady’s most trusted and biggest target in the game on Sunday.

Gronk is a mismatch for the Dolphins linebackers as we pointed out in our All-22 piece on Friday. He’s a physical beast who is tough for linebackers in coverage with his speed and is a size mismatch for safeties. The Dolphins have had their issues with him in the past and this week, with the other injuries, they’ll put a premium on trying to take him away.

He’s looking fully healthy now after getting a bone bruise in Denver and should be ready for a big game with Brady as the team tries to lock up the #1 seed.

Key Stat: In the first meeting in October, Gronk was a handful for the Dolphins defense catching six passes for 113 yards including a 47-yard touchdown in the first quarter. His 113 receiving yards were tied for his season high (NYG and Buffalo).

Ryan Tannehill: The Dolphins quarter back has also been singled out for criticism this season and not just from Miko Grimes, wife of Dolphins CB Brent. Tannehill was called out in a series of posts on Twitter by Grimes’ spouse in an expletive filled rant.

Tannehill has been playing hurt and left Sunday with his leg wrapped. He also played last week after finding blood in his urine. No one has been sacked more since 2012 (183 sacks allowed), and it is taking its toll on the Miami signal caller.

But expectations were high this season after Tannehill signed a $96-million-dollar extension. And while Miami has over-relied on the passing game this season, much of the onus, perhaps too much is being placed on the feet of Tannehill. He has a pair of very talented wide receivers in Jarvis Landry and DeVante Parker and Sunday will be a chance for them to start building towards 2016.

Key Stat: In the game back in October, Tannehill completed 28 of 44 passes for 300 yards but none for touchdowns and with two big interceptions. He was also sacked five times. Miami’s offensive line has struggled to protect him and if he finds the time, he can be effective.

Steven Jackson: The Patriots desperately need to get the running game going prior to the playoffs starting and to take some of the pressure off of Tom Brady and the passing game that is decimated by injuries. Jackson should get the chance to help in that department.

Jackson in his prime was a beast of a runner, those days of him dominating are gone but he looked like the 2014 version of Steven Jackson which is plenty good enough in limited action against the Jets. He and Brandon Bolden should see most of the heavy lifting on Sunday while James White sees the bulk of the passing game reps.

Miami’s run defense has been mostly poor this season, and the Pats ran for 95 yards in October but that was on a day where Brady passed for 356 and four scores. With Miami playing out the string, this will be a prime opportunity for them to establish a ground game with Jackson and set up play action passing.

Key Stat: In his first action last week, Jackson managed on 15 yards on seven carries. That number of both carries and yardage will have to be much better this week as the team looks for much more from him.

Lamar Miller: The Dolphins talented running back may be playing in his last game in a Dolphin uniform. He’s a free agent after this season and he may be looking for a fresh start somewhere else next year as he’s very under-utilized with the Dolphins.

Miller averages 4.9 yards per carry but has had just three games in 2015 where he’s had more than 15 carries. In six games this year, he had single digit totes of the football. He’s frustrated at his lack of use and frankly it makes no sense when the Miami passing game has been largely stuck in neutral this season.

For the Dolphins coach Dan Campbell, with a banged up QB and OL it would make much more sense to work Miller harder this week especially after seeing what the Jets did to the Patriots defensive front seven last week running right at them.

Key Stat: Miller ran for only 15 yards on nine carries in the first meeting. He was also targeted five times in the passing game and had five catches for 19 yards. He should see a lot more work this time around.

Stay tuned to PatsFans.com and we’ll have post-game analysis of the opener as well as transcripts from Bill Belichick’s press conference immediately after the game.