7 years ago at 11:59 am ET
Follow @SteveB7SFG
Posted Under: Patriots Commentary

The Patriots were victorious in their earlier season matchup with the Miami Dolphins in Foxboro. Here’s a look at that game using the NFL’s Game Pass with the All-22 game film to see how they can do it again.

Although Julian Edelman, and Dion Lewis were big parts of the Patriots offense on that night, there remain matchups that can be utilized once again especially in the middle of the field with Rob Gronkowski and James White, in lieu of Lewis.

We’ll take a final look at some of the key plays on Sunday before we move on to the bye week for the playoffs. We indicated during our key matchups some of the areas to monitor in this game and we’ll highlight them from the earlier contest.

If the Patriots can create some of these same mismatches on the field on Sunday, there is no reason that they shouldn’t be victorious and secure the #1 seed of the AFC.

Gronkowski 47-Yard Touchdown: On the opening drive of the game, the Patriots have moved to the Miami 47-yard line. Gronkowski aligns in-line on the right side, in a tight formation. TE Michael Williams goes in motion right. LeGarrette Blount is the lone deep back with Brady under center and they are showing run. 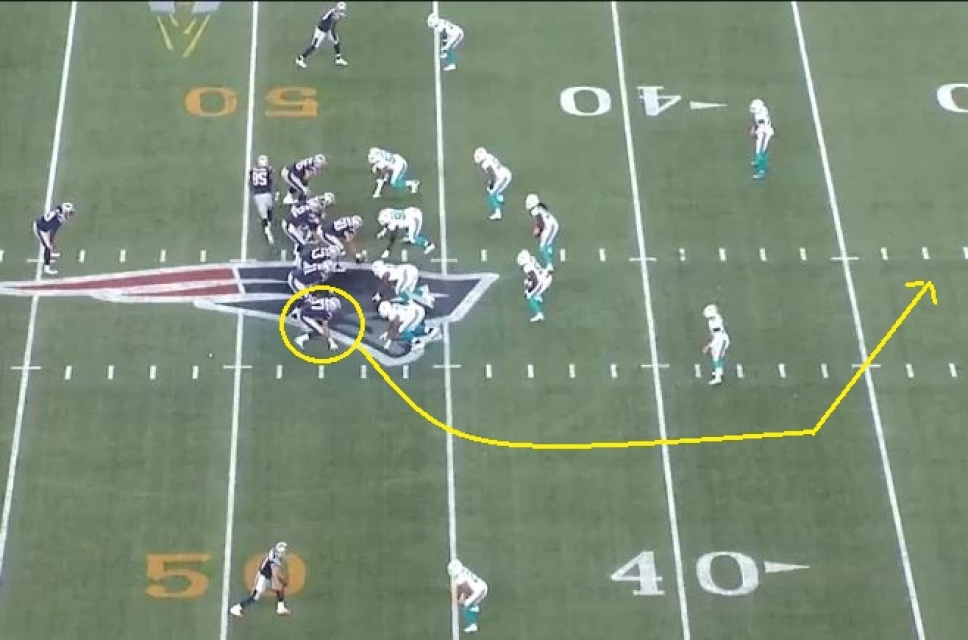 At the snap Gronkowski runs a deep crossing route under the linebackers who can’t drop deep enough to influence the play. Brady throws over them and Gronkowski has a lot of room to run. 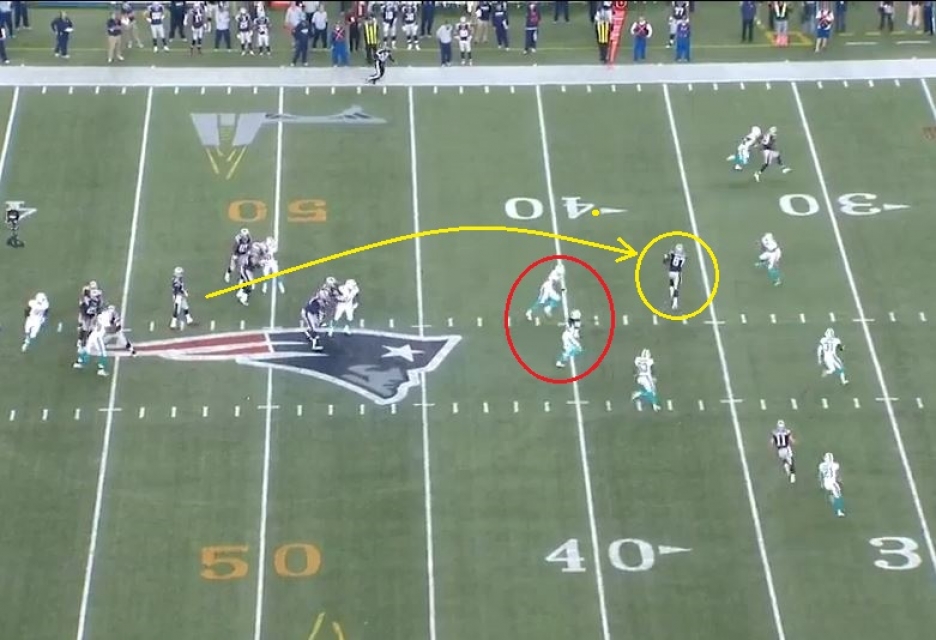 He runs deep down the left sideline and gets a crushing block from Brandon LaFell who takes out safety Michael Thomas giving Gronkowski an easy path to the end zone. 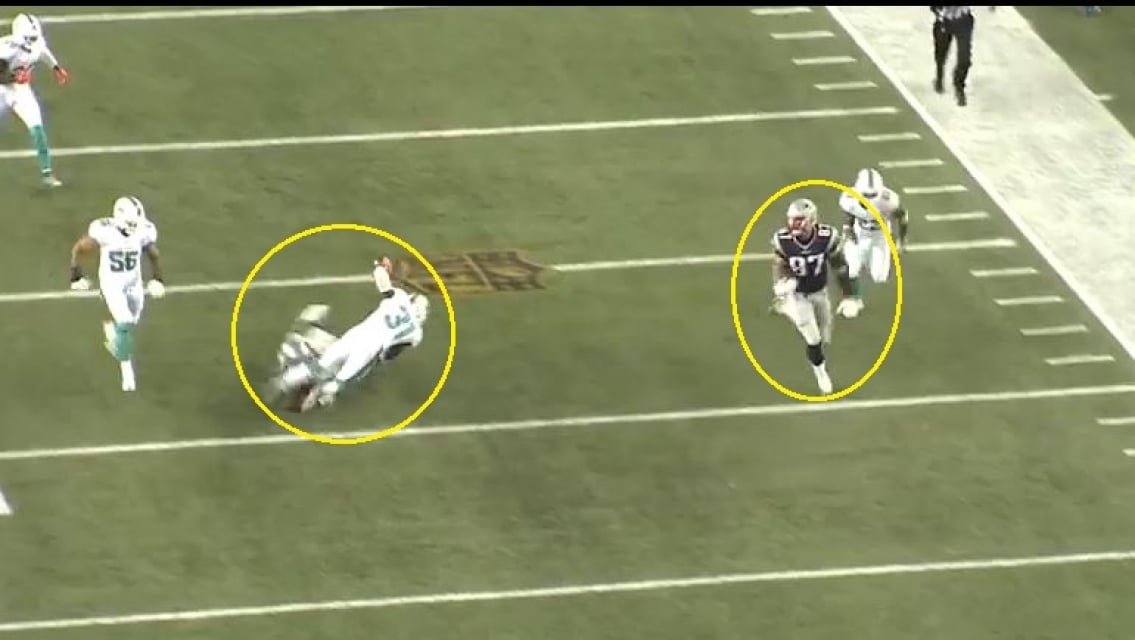 Blount 6-yard run: One of the reasons the Dolphins have struggled so much this season has been the poor play of the defense, both against the pass and against the run. Here is a prime example of them being in good position initially and not making a play.

The Patriots are in run formation with Blount taking a straight hand-off from Brady. At the point of attack, the Patriots double team Earl Mitchell inside and Olivier Vernon on the edge. Initially the Dolphins are in great shape to stop the play. Linebackers Kelvin Sheppard and Jelani Jenkins as well as safety Reshad Jones all have open gaps to shoot in and disrupt the play. 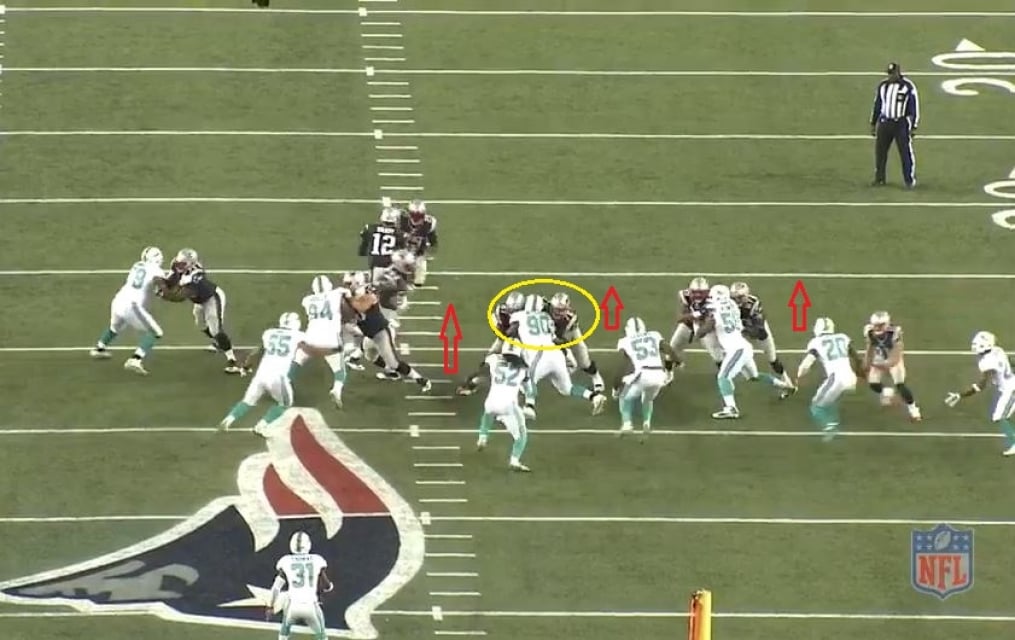 But the Patriots block down and Shaq Mason peels off Vernon and seals Jenkins. Julian Edelman comes in from the outside and pushes Jones inside. Blount finds nowhere to run inside and breaks it to the left where he runs off left tackle for a gain of six. 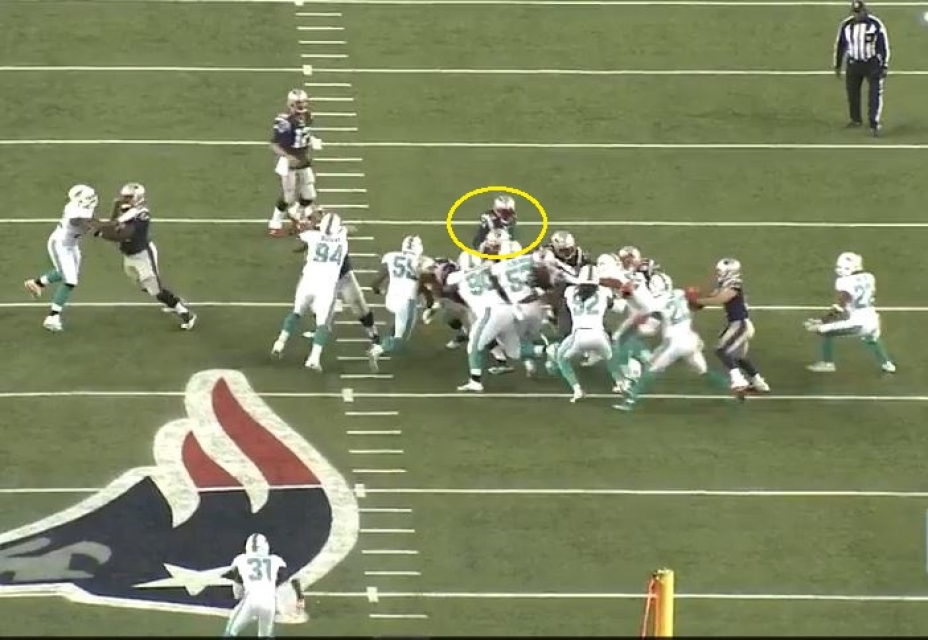 Gronk 12-yard reception: After getting a false start penalty, the Patriots have a 1st and 15 from their own 26-yard line. They line up with two tight ends (Gronk and Chandler) to the right with Gronk inside. Gronkowski gets a free release and once again loops behind the linebackers and creates a great deal of separation. 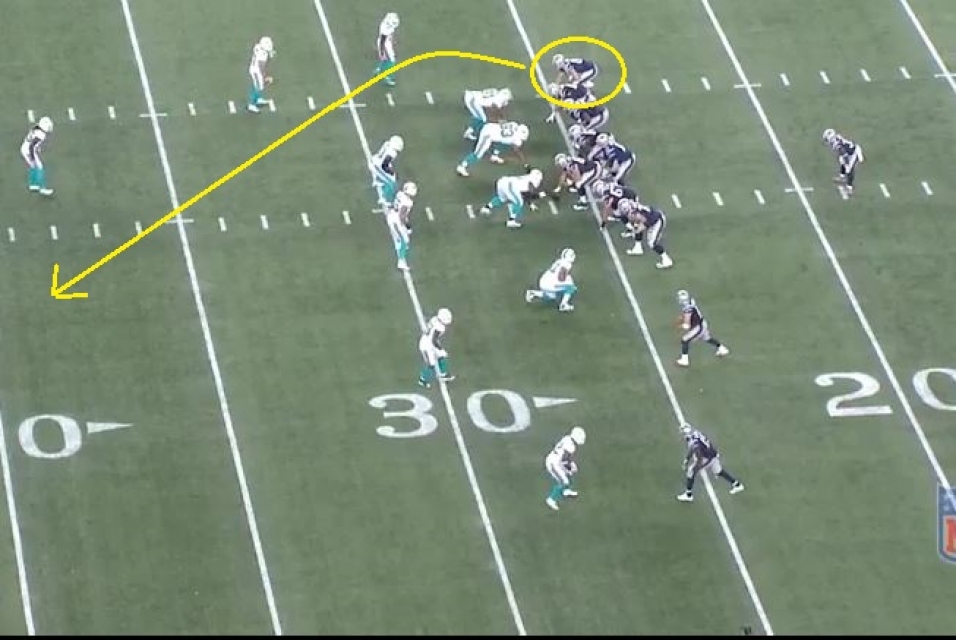 Brady lobs his pass over the coverage to a wide open Gronk and the Patriots gain 12-yards and make it 2nd and 3 which is much more manageable for an offense. Miami’s linebackers can make a deep enough drop to influence the play. 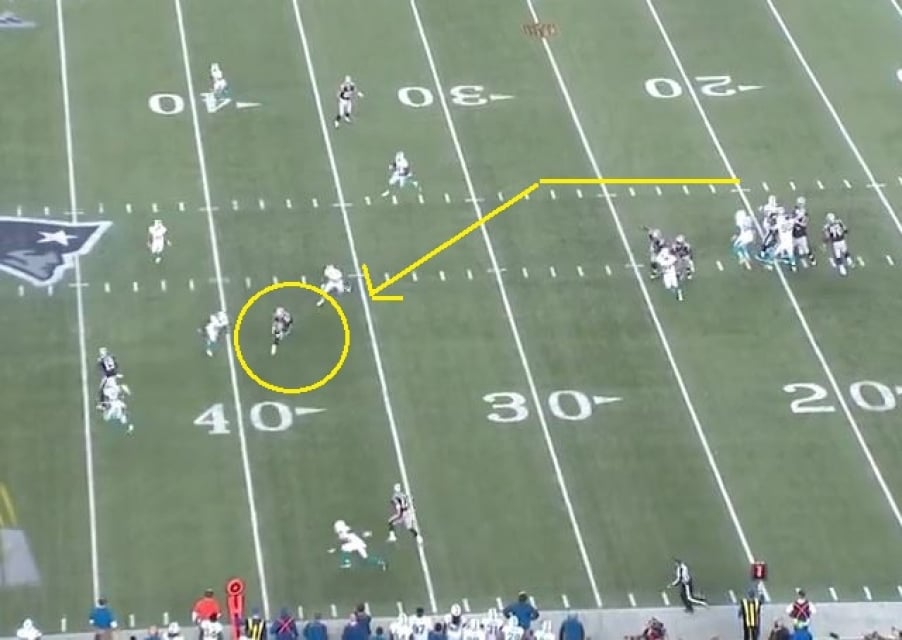 Gronkowski 33-yard reception: Later in the game, the Patriots line up in the same formation this time with Dion Lewis in the backfield. The Dolphins slide up the safety Jones to take Gronk this time and contest the route from the line. 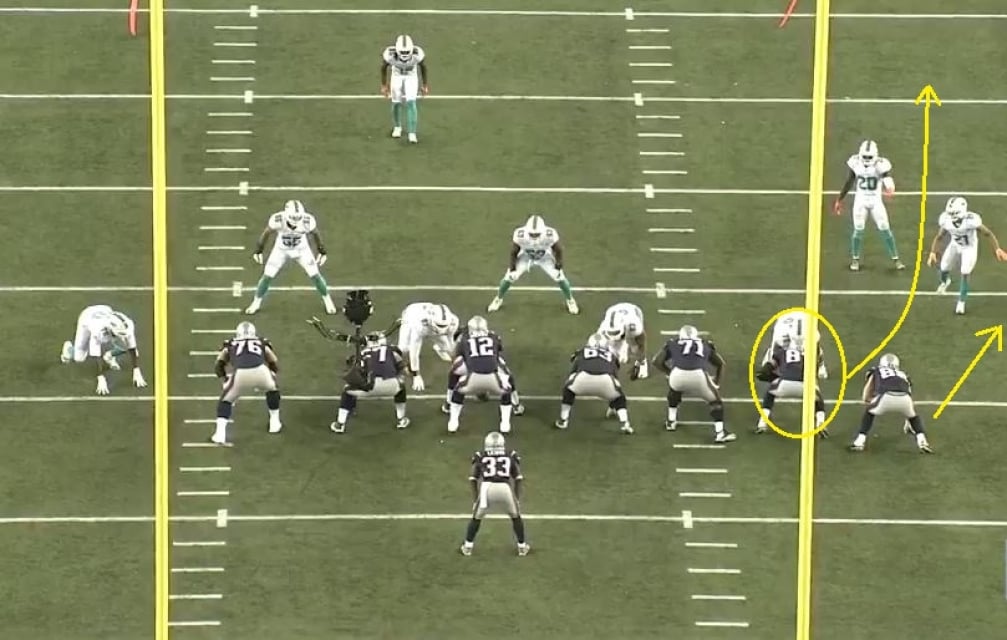 But at the snap, Brady freezes Jones and the linebackers with play-action. Gronkowski gets a step on Jones who is in catch up mode. Gronkowski is running free down the seam and Brady’s back shoulder throw is an easy catch because Jones is trying so hard to catch up, he actually overruns the play. 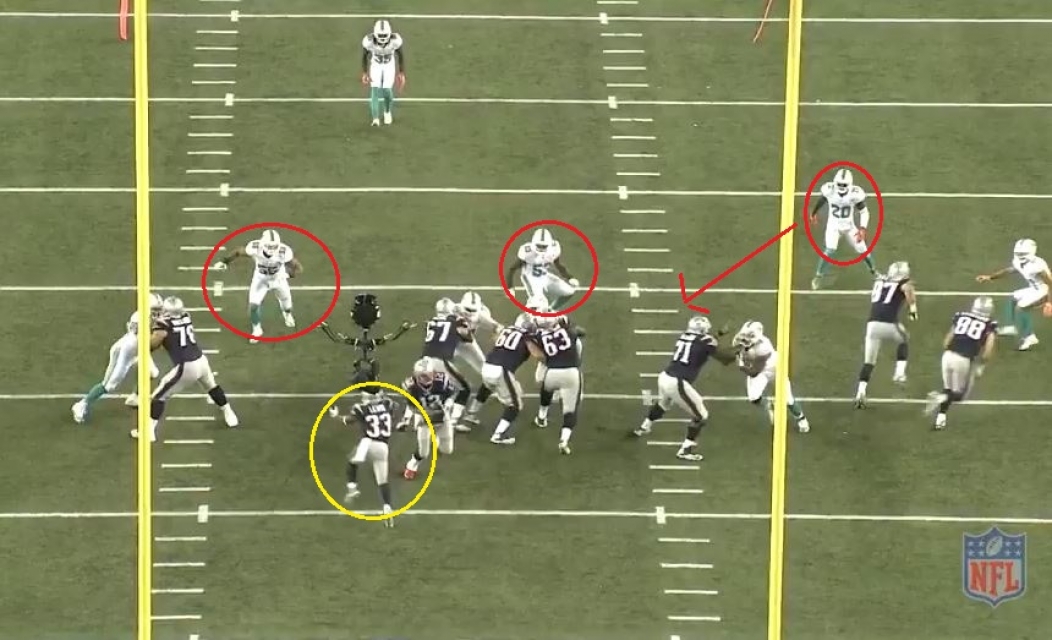 Had Brady tried to hit him over the top, Jones’ make-up speed would have allowed him a much better chance of breaking it up. Heads up play by Brady and Gronkowski. 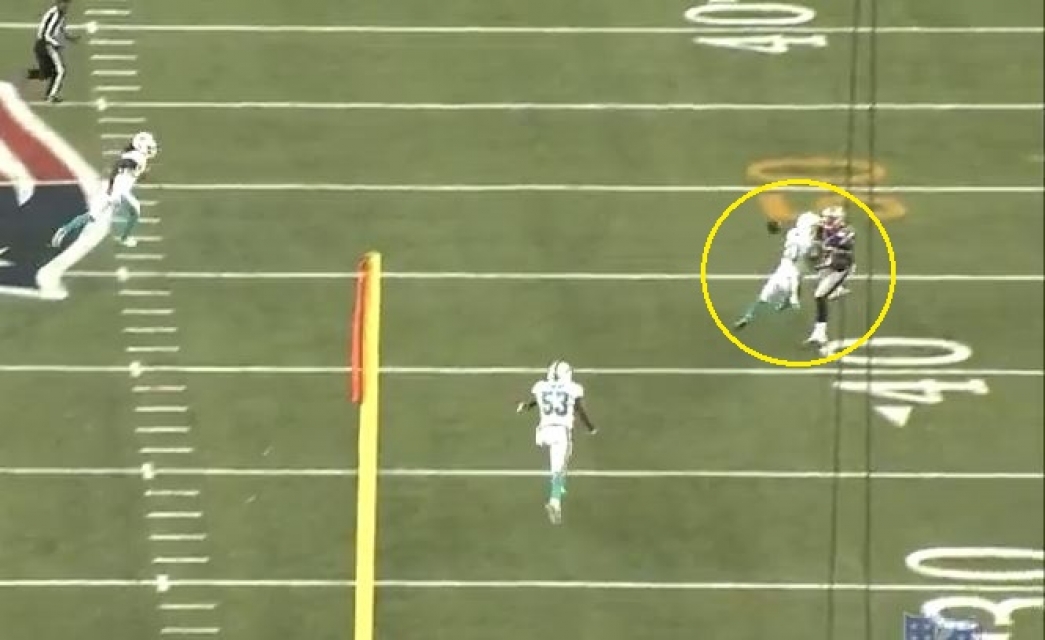 Logan Ryan Interception: In our keys to the game, we talked about how QB Ryan Tannehill looks to WR Jarvis Landry more than twice the rate of anyone else. And that sometimes when Landry is taken away, he’ll make mistakes when making his second and third reads.

At the snap Landry is covered by Malcolm Butler with an outside shade. Landry is running a short slant inside. Tannehill looks there but safety Pat Chung is perfectly in place in the throwing lane. His secondary target, the tight end is covered by Jamie Collins inside. 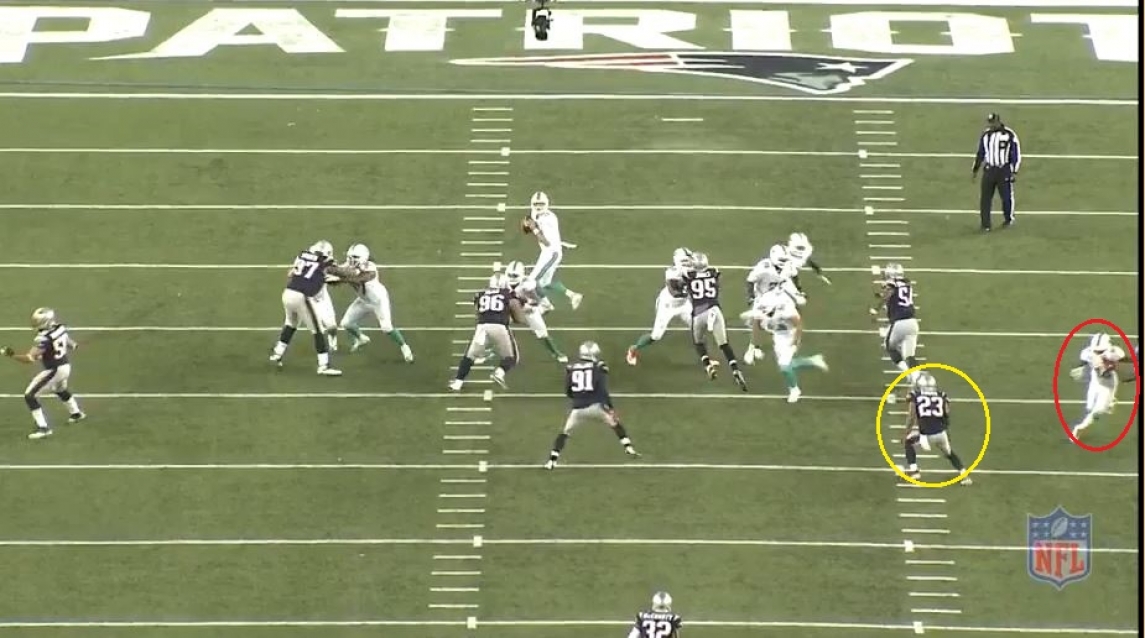 Tannehill then makes a bad decision and tries to force the ball into very tight coverage to wide receiver Rishard Matthews. He’s covered well by CB Logan Ryan who has safety help over the top. Tannehill has to loop the pass over Rob Ninkovich who’s in the flat and that gives Ryan plenty of time to undercut the route and make an easy interception. 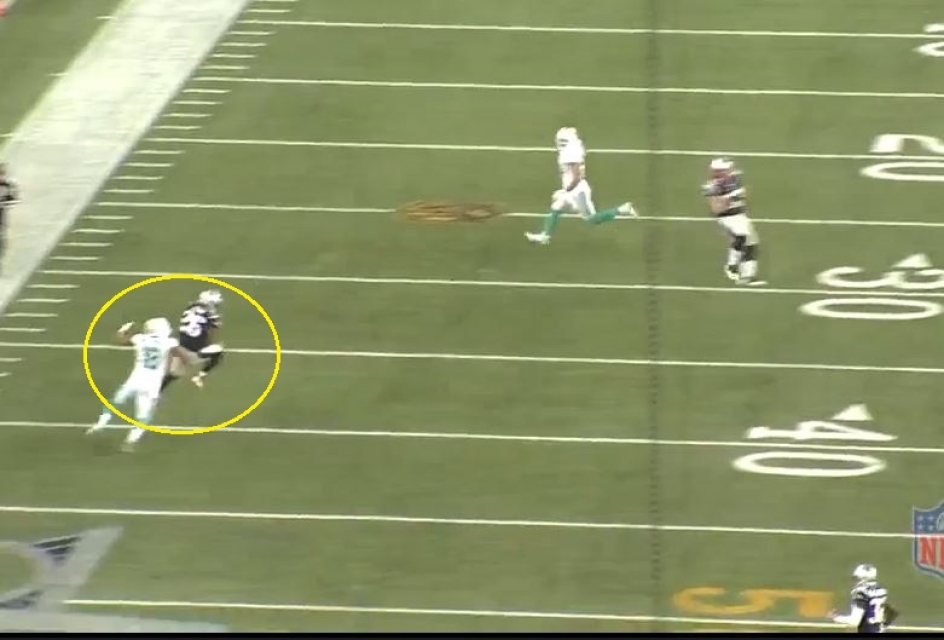 This is a play indicative of the struggles the Dolphins have had on offense when their top option isn’t open. The Patriots will be looking to force Tannehill into making more of these type of mistakes.

Lewis 16-Yard TD: With the Patriots on the Miami 16-yard line, they used Gronkowski as a decoy and opened up the middle of the field for Lewis to score an easy pitch and catch touchdown from Brady.

The Patriots align with three receivers to the left and Gronkowski in-line on the right side. Lewis is to Brady’s right in the backfield. At the snap, Gronkowski runs straight up the seam and draws three defenders with him into the end zone. Lewis stays in as if to help block the defensive end. 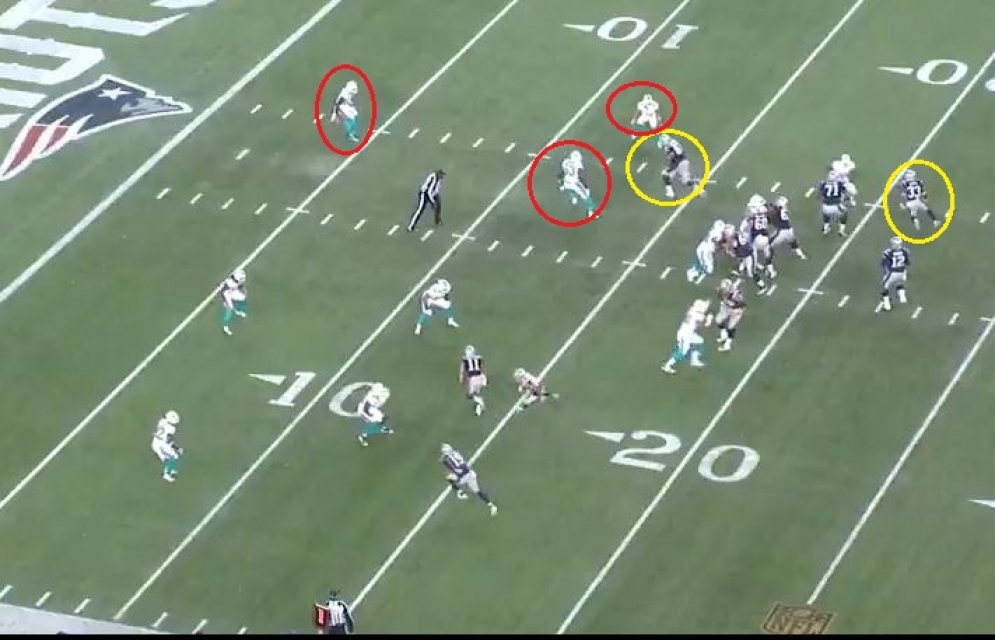 Lewis then slips out into an empty middle of the field where Brady hits him at the 11-yard line. With no one around him Lewis has an easy scamper into the end zone. These are just some of the big plays that the Patriots were able to produce against Miami when the teams met in Week 8. Granted, their injuries have taken a toll and they may opt to attack in different ways this time around. But Gronkowski is the key here. The Dolphins don’t have anyone that can matchup with him and he’s a big mismatch in the middle of the field. He commands such attention that he’ll open up empty space for other receivers on offense.