With the end of the week finally upon us, here’s a quick rundown of today’s top stories:

Fears Fine With Current Running back Group – The position group that holds the most concern heading into training camp remains the running back position, which still carries the most questions after an uneventful offseason.

Their two top backs have serious injury questions, with both coming off of season-ending injuries.  On his way back is Dion Lewis, who suffered a knee injury that ended his first go around with the Patriots in 2015, while LeGarrette Blount is returning from a significant hip injury that ended his season and left New England severely depleted by the time the postseason arrived.

From there there’s no other name who would be considered a viable starter, with James White, Brandon Bolden, Donald Brown, Joey Iosefa and Tyler Gaffney among the remaining names of players competing for playing time.

After not selecting a running back in the draft, the Patriots must not have seen a player worthy of using a selection on, and as a result they finished the weekend exactly the same as they did when it started.

To most, there’s a reason to be concerned considering how poorly they ran the football last season and part of that had to do with personnel, while the other had to do with so many injuries on the offensive line.  With no running back to carry the football and a depleted group up front to open up holes for them, it was a recipe for disaster and obviously hurt them down the stretch. 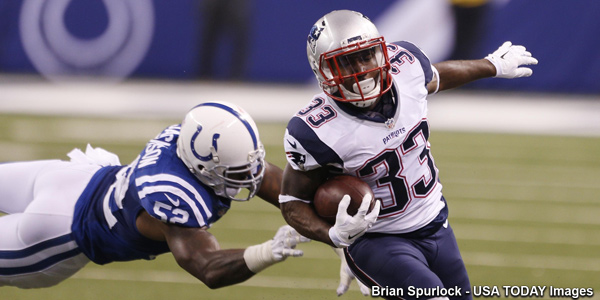 But heading into this year, running backs coach Ivan Fears doesn’t see a problem, and he feels confident in the guys he has at this point.

“It’s a good group,” Fears told the Worcester Telegram this week. “A lot of those guys have been productive in the league, including Donald Brown. We have to like that kind of action. I have a roomful of guys who have all played and made plays in the league. That’s exciting to me.”

It’s a good thing he’s excited.  Because for now, there seems to be more questions than answers for a group that will likely start with Lewis on PUP, while Blount remains just a big of a question as the team continues getting ready for training camp.

Seahawks Top Patriots New Ticket Plan – As the Patriots unveiled their new ticket pricing plan, which causes marquee match-ups to be priced at a higher price point, there was one team that topped the charts for those who want to see a game that will feature one of the bigger battles of the season.

The Patriots’ Sunday night game against the Seahwaks on November 13th tops the highest level of the ticket pricing this season, with the Boston Herald’s Chris Mason pointing out that New England’s Super Bowl rematch against Seattle will fetch $275 for a lower level midfield seat, while one in an upper level corner will be $111.

Overall the team split the home games into four categories, including elite, marquee, premier and preseason.

Mason also pointed out that both Miami and Cincinnati fell into the next tier for “marquee” opponents, while the remaining games fall into the “premier” category.

Single-game tickets are set to go on sale in July.

Each reportedly agreed to their rookie four-year deals.

Current and Former Patriots Celebrate McCourty’s Wedding – Patriots safety Devin McCourty spent this offseason planning his wedding and this past weekend he enjoyed a host of current and former teammates being there for his big day as he married his fiance, Michelle Powell, in front of friends and family.

According to Patriots.com, his brothers from the Patriots defensive backfield were on hand, including Malcolm Butler, Patrick Chung, Duron Harmon and Logan Ryan.  Among others were former Patriots RB Patrick Chung, Darrelle Revis, Shane Vereen and Brandon LaFell.

LaFell posted a beautiful photo from the event on his instagram page in what looked like an absolutely beautiful event.  Congratulations to them both:

SOCIAL POST OF THE DAY:
Tom Brady with Vanilla Ice at an Under Armour Event:

What a great day at #ArmorDay chilling with Tom Brady pic.twitter.com/JVS79VBTNE