Tom Brady has been able to do a lot with very little this season but on the road against one of the top defenses in the league, there wasn’t much magic to be had on Sunday.

When it came to moving the chains, Brady was undermanned and against a tough Jets’ defense struggled to get anything going consistently.  Without Danny Amendola, who was sidelined back in New England with a knee injury, and Julian Edelman, who still isn’t ready to return, he didn’t have any reliable target to lean on.  He still had Rob Gronkowski, but the veteran spent the game blanketed by Darrelle Revis and was targeted on just six of Brady’s thirty-one targets.

One glaring number was their troubles on third down, with Brady struggling to find anyone open. He finished the afternoon 2-of-7 on third down for just one yard, with the offense sputtering on a day where they finished 1-of-10.

They didn’t get their first conversion until just under nine-minutes to go in the game, which came on a 6-yard completion to James White on a 3rd-and-5.  Looking closer at the numbers, Brady had a lot of success on early downs, connecting on 8-of-11 on first down and 9-of-10 on second down. But on third down, Brady’s only two completions were both to White, with the veteran missing three times to Keshawn Martin, and twice to Brandon Bolden.

And the bad omens started early in the contest. Brady watched his left tackle, Sebastian Vollmer, go down with a leg injury and get carted off the field just five plays into the game and set up an afternoon where the Jets came after him. They harassed him throughout the game, hitting him five times and sacking him twice.

It’s been an ongoing problem, adding to a long laundry list of players who have been injured this season, and Brady admitted that it’s been difficult to deal with, but they can’t use that as an excuse. 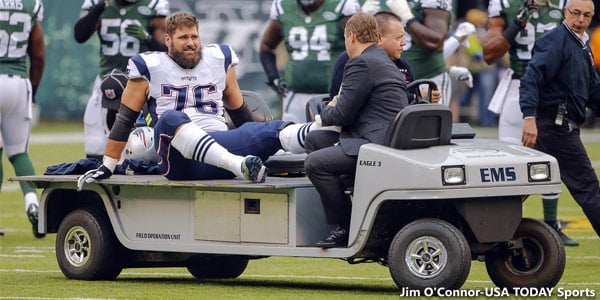 “It’s tough. You know we’ve had so many guys that have stepped in and try to do a great job,” said Brady.  “We’ve just had some bad luck. Truthfully I think that’s just…the game always ebbs and flows and, you know, [we’re] missing some guys, but like I said, I don’t think we’ve ever used those as excuses and we had opportunities to win this game and hopefully we can get healthy and we’ve just got to win one game next week.”

New England is already playoff-bound and have a first-round bye, but they’re still one win away from a number one seed, which would ensure their playoff games will be at Gillette Stadium for as long as they’re in the postseason mix.  By the time those games in January, hopefully that will mean both Edelman and Amendola will be back in action and Brady will have all his weapons back.

Sunday’s loss may one day be just a distant memory, but while they’ll eventually have their best players back in the fold, Brady knows it’s going to take everyone being at their best and playing better than they did on Sunday if they hope to end up in Santa Clara in February.

“We’ll see. I think that all remains to be seen,” said Brady. “It depends on, you know, how hard we work, how well we execute. I think the better players you have out on the field, you know, certainly those guys have been some of our most dependable players for as long as they’ve been here, that always helps.”

“No, but I wouldn’t put it all on their shoulders. I think that all the guys who played today have to, obviously, do a better job because what we did today wasn’t good enough.”