7 years ago at 9:03 am ET
Follow @ralvarez617
Posted Under: Patriots Commentary 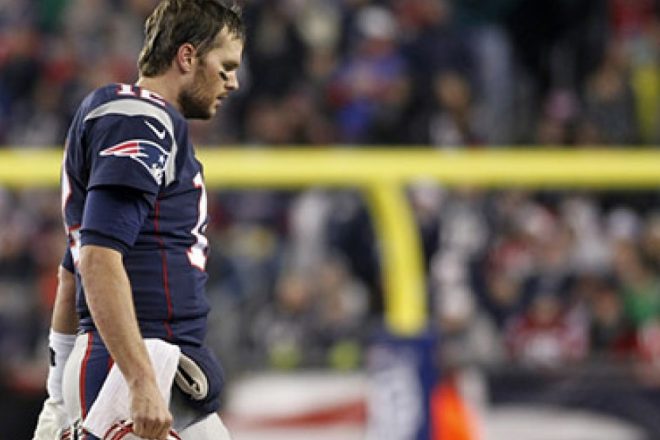 Week 13 began on a high “flying” note for the New England Patriots as quarterback Tom Brady posted to his Facebook page yet another weekly funny Photoshop photograph of himself entitled “The Eagles Have Landed.”

Leading up to the game, almost everyone was unanimously picking the Patriots. Many by large margins.

The @Eagles​ will hang tight early before eventually getting methodically beat down by the @Patriots​. https://t.co/ajyiH4t0Ui

Prediction time! Who ya got? I'll take the #Patriots…by a lot. https://t.co/TCKKPFCEuu @wbznewsradio @cbsboston

How bad of a deficit will the Eagles lose to the Patriots? @mattbleary

The game started ugly but somehow the Patriots found themselves up 14-0 with the help of six Eagles penalties.

But then uncharacteristic and unexplained events began to unravel for the Patriots towards the end of the second quarter. Beginning with an unusual drop kick that hasn’t happened since the 1930’s…no that wasn’t how it was drawn up.

Stephen Gostkowski walked up to the ball and flipped it to Nate Ebner, who drop kicked the ball right to the Eagles for a great field position. The Eagles wound up scoring cutting the deficit to 7 at 14-7.

Care for an explanation Bill?

in case you were hoping for an answer on the onside kick… #nothappening pic.twitter.com/D9MM3eEHZF

And then the special teams nightmares continued on this blocked punt right before halftime when it appeared the Patriots were about to go up 21-14, instead we had a tie ballgame going into halftime

….it was a rough night for Nate Ebner.

The Patriots and Eagles are tied 14-14 at halftime because of this https://t.co/1ymYZQHjv0

AND THEN THIS HAPPENED early in the third quarter….when again it appeared the Patriots were about to go ahead. The 3rd red zone interception for Tom Brady THIS SEASON of his five total.

Did I mention this game was a Patriots special teams nightmare? Oh right the Eagles weren’t finished.

As the game reached 28-14 in favor of the Eagles following the punt return, Bill Belichick pulled a little trickery out of his hat on this crazy play that saw Tom Brady catch his first pass since 2001.

Looks like the Patriots finally solved their "all of our wide receivers are hurt" problem https://t.co/ZWSD1AsCWN

It was short lived.

Uhhh…Do Your Job? Moving along…

The Patriots would rally back with one score at 35-28 to put the game within reach courtesy of an onside kick that led to a touchdown.

Alas, what is an NFL game without some more poor officiating controversies?

The Eagles final drive that closed the game out contained this questionable false start on quarterback Sam Bradfords clutch third down conversion under two minutes to play.

There DID appear to be a false start on that huge third down conversion. But come now. Not getting called. https://t.co/J6Z8bXay8W

It was another long night for wide receiver Brandon LaFell.

Brandon Lafell has the compete level of a Teamster 2 weeks from retirement.

Tom Brady is a legit better WR than Brandon LaFell.

This video made its return.

“It felt like a bad day of practice.” LaFell would say to the media following the game.

The Patriots were given life to potentially tie the game with under a minute to play, but key drops by Lafell and James White had the offense looking like….

When all was said and done the sky was falling yet again in Patriots Nation following the Eagles stunning 35-28 upset victory in Foxboro.

Patriots just got blown out at home by THE EAGLES. This feels even worse that 45-14 at KC on MNF last year. That was 4th game. This is 12th.

Every Pats loss sucks. And two in a row? Plagued by mistakes? Forecast calls for a 100% chance of Monday biting the big one.

Yo @randymoss – we need you for the stretch run, hop a plane to Massachusetts. We need a deep threat. Give us 2 months.

But just remember…somebody always has it worse.

Patriots have lost 2 straight games for just the 5th time since 2001. Eagles have done it 27 times. Cleveland has done it 58 times.