7 years ago at 7:56 am ET
Follow @SteveB7SFG
Posted Under: Patriots Commentary 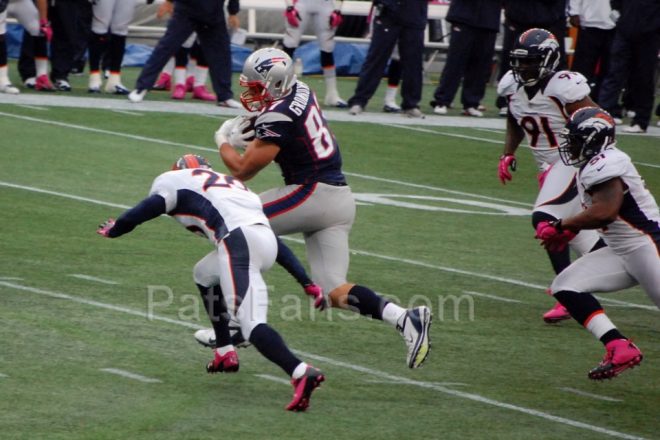 The New England Patriots head out on the road to face the Denver Broncos on Sunday Night Football. This will be back-to-back night games on national television for the Pats having come off a short week and playing on Monday night.

The game will be televised by NBC with their top announcing crew of Al Michaels, Cris Collinsworth on the call. The game will also be on the Patriots flagship radio station 98.5 The SportsHub with Bob Socci and Scott Zolak on the call. Kickoff is slated for 8:30 p.m. ET

The Patriots (10-0) beat the Buffalo Bills 20-13 on Monday Night Football. Tom Brady threw for 277 yards and a touchdown despite being hit on 50 percent of his throws and missing many of his offensive weapons. The defense held Tyrod Taylor in check all night long and allowing the Bills to rush for only 3.1 yards per attempt.

The Broncos (8-2) beat the Chicago Bears 17-15 on the road as QB Brock Osweiler starting in lieu of Peyton Manning had a very successful debut throwing for 250 yards and a pair of scores as the defense stuffed the Bears in the red zone all game long.

Series History:
The Patriots and Broncos will meet for the 50th time in their history dating back to the early days of the AFL with Denver holding a 28-21 all-time series lead. Denver has traditionally been a tough place for the Patriots to win where Denver holds a sizeable 19-9 advantage including three playoff wins.

The last meeting between the teams was in November of 2014 with the Patriots taking a 43-21 win in Foxboro.