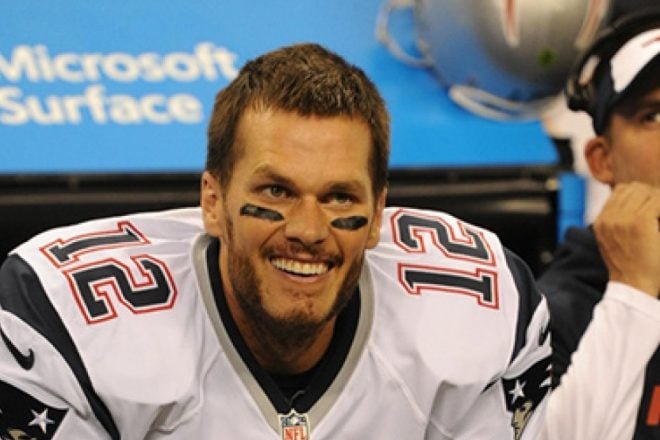 Just when you thought it was gone, the NFL reminded us that they’re still unhappy with the fact Tom Brady is playing football and they’re still hard at work behind the scenes to get him off the field at some point and serve up his previously vacated suspension.

On Monday the NFL officially filed its appeal of Judge Richard M. Berman’s decision in federal court from Sept. 3rd, which vacated the league’s first attempt at suspending Brady for the first four games of the 2015 season.  In the appeal the NFL hides little, now repeatedly accusing Brady of being involved in “a scheme” and furiously disputes the fact that as Commissioner, the court had no right to overturn Brady’s suspension.

“Stripped of its celebrity, this case involves a straightforward exercise of authority expressly granted under a collective bargaining agreement (“CBA”) and shielded from collateral attack by decades of precedent concerning labor arbitrations. The National Football League’s collective bargaining agreement with the NFL Players Association affords the NFL Commissioner broad authority to impose discipline for conduct “detrimental to the integrity of, or public confidence in, the game of professional football.” Exercising that authority, which mirrors the broad discretion given to commissioners in other sports to ensure the integrity of the game, the Commissioner suspended Tom Brady, quarterback on the New England Patriots, for four games after finding that Brady had participated in a scheme to deflate game balls to be used in a conference championship game. The scheme was aimed at gaining an unfair competitive advantage on the field, and it was devised to avoid detection by game officials. It struck at the heart of the game’s integrity and the public’s confidence in the NFL’s on-field product. The Commissioner’s conduct detrimental authority exists for incidents just like this.”

According to the document, the NFL still believes the Commissioner was within his rights to suspend Brady.

“The Commissioner acted well within the bounds of discretion expressly granted by the CBA, while the district court vastly exceeded the narrow bounds of judicial review allowed under the Labor Management Relations Act and decades of precedent. The district court’s decision cannot stand.”

In that document, which goes over 60 pages, the report more or less centers around the fact that Roger Goodell should have full authority when it comes to the discipline of players and it’s something that is mentioned so often, it exudes the frustration the league is feeling about this decision.

“For over forty years, the CBA has granted the Commissioner broad authority to impose discipline, including “a fine or suspension,” on a player who engages in “conduct detrimental to the integrity of, or public confidence in, the game of professional football.”

“The CBA does not define what misconduct falls within this authority; nor does it specify any presumptive or maximum discipline for engaging in such conduct. Instead, the parties have left the “conduct detrimental” standard’s application to the Commissioner’s reasonable judgment, with the expectation that he will exercise that authority in light of developments and changes in the game over time, and they have authorized the Commissioner, upon finding such misconduct, to suspend players ‘for a period certain or indefinitely.'”

The deeper you get into it, the nastier it begins to get.  But the most irritating part of this remains the same thing from the Wells Report.  There is the obvious mention of the text messages exchanged between John Jastremski and James McNally, which don’t include any direct texts or requests by Brady to break any rules.  But there’s the mention of “The Patriots’ equipment staff thus knew that inflation level was important to Brady and ‘that he wanted the footballs inflated at the lowest permissible level.’“

So Brady wanted the footballs inflated at the lowest permissible level.  Those are their words, in today’s report and a point of emphasis the league, themselves, used.  Not “as low as possible”, not “as low as they could get away with”.

How we’re still even at this point knowing that fact defies logic, as Brady, as we know, never seems to request any rules to be broken throughout this entire investigation.  Yet, here we are, months later, with this dragging on as Goodell continues his crusade to defeat the player who is running over opponents during New England’s first six games.

The other part about the report that was filed is the league blatantly accuses Brady of participating in not only a “scheme” to tamper with the footballs, but also that he knowingly did so “after they had been approved by game officials.”

“Among his many other findings, the Commissioner concluded that: “(1) Mr. Brady participated in a scheme to tamper with the game balls after they had been approved by the game officials for use in the AFC Championship Game and (2) Mr. Brady willfully obstructed the investigation by, among other things, affirmatively arranging for destruction of his cellphone knowing that it contained potentially relevant information that had been requested by the investigators.” SPA54. “The result” of this scheme, the Commissioner concluded, “was to undermine, if not vitiate, the game officials’ efforts to ensure that the game balls used by the Patriots complied with league rules.” SPA51-52. The Commissioner ruled that these actions “indisputably constitute[d] conduct detrimental to the integrity of, and public confidence in, the game of professional football.”

Another amusing note from the report was that Goodell continues equating the suspension to illegal substance use, with the report going so far as to suggest he was apparently being “lenient” by only suspending Brady four games, using the parallel of players using masking agents “to cover up the underlying violation”.

“The Commissioner explained that the four-game penalty he imposed was “fully consistent with, if not more lenient than,” that policy, which calls for a four-game suspension for a player’s first positive drug test and a six-game suspension if the player is found to have used masking agents— i.e. to have tried, as Brady was found to have done here, “to cover up the underlying violation.” 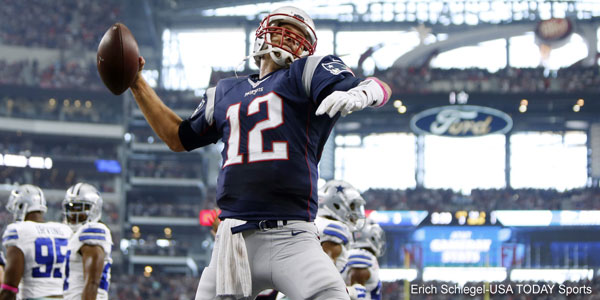 So far Tom Brady is steamrolling his way through opponents after a 6-0 start. (USA TODAY Images)

The league uses the word “inexplicable” repeatedly when discussing how the court couldn’t have sided with it based the evidence, which, once again, includes the mention of the “destruction” of Brady’s cell phone.

One of the amusing parts of the report was the fact the league went so far as to say that Brady made a “trifecta of errors” and that’s why these rulings can’t be second-guessed.

“The Commissioner expressly offered to reopen his ruling on the Pash testimony if the examination of Wells undermined the Commissioner’s factual determination about Pash’s role. Brady never even tried to take advantage of that opportunity—even after Wells testified that Pash had reviewed and commented on a draft of the investigative report. The Commissioner was clearly in the bounds of his authority as the contractually designated hearing officer to deem the issue waived. See, e.g.,Misco, 484 U.S. at 40; Am. Postal Workers Union, AFL-CIO v. U.S. Postal Serv., 754 F.3d 109, 114 (2d Cir. 2014). Thus, the district court’s ruling ignored a factual finding about Pash’s role that the district court was powerless to disturb, the opportunity to confront Wells about Pash’s role, and the failure to try to reopen the matter based on Wells’s testimony. That trifecta of errors demonstrates the wisdom of decades of precedents making clear that the arbitrator’s factual findings and procedural rulings are not subject to judicial second-guessing.”

But where it really got interesting was where there was obvious frustration about Wells’ report, which most believe wasn’t exactly independent and the fact that Jeff Pash didn’t testify, which was one of the key issues Berman had with the case.  For whatever reason, the league now doesn’t seem to feel that the investigation needed to be “independent”, which defies logic considering that the only way to find out if a player really did anything wrong is for a third party to examine the facts fairly.  Apparently, the league disagrees.

“Even if that were not the case, the district court’s conclusion that the Commissioner’s ruling was so prejudicial as to warrant vacatur of his final decision is inexplicable. The best the district court could say was that examining Pash may have allowed Brady to “explor[e]” whether the Wells investigation was “truly ‘independent.’” SPA35. But whether the investigation was or was not “independent” is irrelevant. Nothing in the CBA requires the League to authorize or an arbitrator to rely on only “independent” investigations; in fact, hearing officers routinely rely on investigations conducted by the League itself.”

This sentence more or less why investigations need to be independent:

“Moreover, the Commissioner made an express finding that he would have reached the same conclusion whether or not the investigation was “independent” because the Wells Report provided a “thorough and reliable” account of the relevant facts.”

In other words, Goodell had already reached a conclusion, he just needed someone to find some facts to back it up.

So here we are, and the league remains steadfast that Brady got a fair shake and that the Commissioner’s decision to suspend him should stand.

And for now, Brady and the Patriots are 6-0 and ready to keep marching until something changes to keep Brady from taking his frustrations out on the rest of the league.

For those of you who want to go through the filing, it was posted online and is available via scribd: