7 years ago at 11:16 am ET
Follow @IanLogue
Posted Under: Patriots Commentary 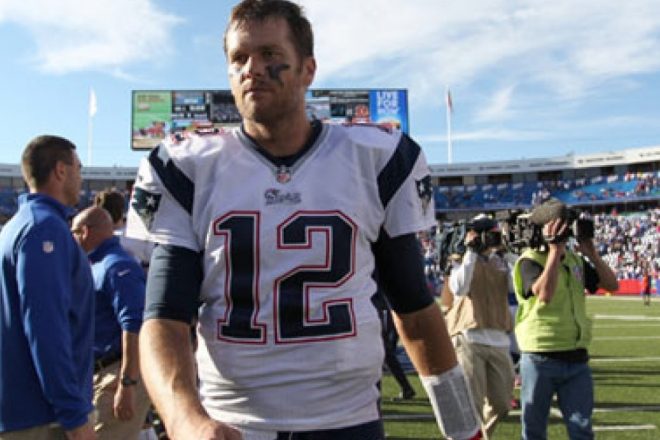 Bills fans were feeling pretty good about themselves toward the end of their convincing 27-14 blowout win over Indianapolis, chanting “We want Brady!” in the closing minutes of the game as Buffalo will be getting a visit from the Patriots this weekend when the two meet on Sunday.

When asked about it Monday during his weekly appearance on WEEI Brady laughed, but said they’ll be ready to go.

“Well, we’ll be there,” Brady said. “Sunday at 1 is going to be a pretty exciting game. They obviously have a lot of confidence. Coach Ryan, Rex has brought that to a lot of places he’s [coached]. We’ll be ready to go. They’re not an easy team to prepare for, but we’ll be ready to go when the ball’s kicked off. If you love football, Sunday at 1 in Orchard Park will be a great place to be.”

Buffalo always makes for a tough environment, with a crowd that was louder than they’ve been in past seasons who made life difficult on the visiting Colts last Sunday, so much so that Rex Ryan admitted his defense had a hard time communicating. The Patriots have won their last three meetings there, with their last loss coming back in 2011 in a loss that saw them blow a 21-0 lead where Brady threw four touchdowns, but he also four interceptions, including a big one in the fourth quarter that was returned for a touchdown that gave the Bills the go ahead score.

Overall New England is 23-3 against the Bills with Brady at quarterback, so he’s clearly had success against them. However, as Bill Belichick likes to point out, what’s happened in the past doesn’t matter. It should likely be another tough game, and they’ll need to be ready to go.

“They’re a tough team. Look, they’ve had a good defense and they play really well at home,” he said. “We know it’s going to be a tough test this week because it’s always tough against them. I know we’ve had a pretty good record against them over the years, but it’s always tight games, certainly playing in Buffalo. It’s a very, very loud stadium. It’s an old stadium, but it’s surprisingly very, very loud. It’s a great environment for football.”

“We’ll be tested, there’s no doubt. They’ve got a real good football team.”

By: Mark Morse
Today I am going to give a wrap-up of the East-West Shrine game practices.  The Patriots coaching staff has been very hands-on.  Steve Belichick arrived…
6 hours ago