7 years ago at 6:21 am ET
Follow @SteveB7SFG
Posted Under: Patriots Commentary 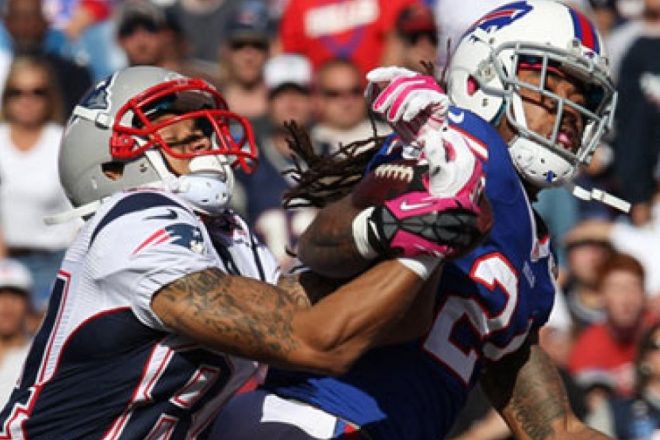 The Patriots travel to Orchard Park, NY this week to face an improved and fired up Buffalo Bills team that has the fan base excited for a possible playoff berth.

Buffalo won their opener 27-14, dominating an Indianapolis Colts team that many experts are picking for a Super Bowl. The Bills used a Rex Ryan formula in their win, a suffocating, attacking defense, a strong running game and solid special teams play.

At the end of the Indy game, the fans were already on to Week 2, chanting “We Want Brady”…setting up the big Week 2 AFC East matchup. Games at Ralph Wilson Stadium are always entertaining affairs with the rabid fan base making a ton of noise in cheering on the hometown team.

Brady has had great success against the Bills and in Buffalo going 23-3 in his career overall, so something will have to give here.

Buffalo “All-in” With Ryan: Say what you will about Rex Ryan and his antics but it sells. The city of Buffalo, so hungry for a playoff team has totally jumped on board with Ryan in 2015.

He’s been everywhere this off-season; jumping out of airplanes, tricking out a new pickup truck, getting a Bills tattoo, wearing a Thurman Thomas jersey to the NFL Combine or just saying all the right things to fire up the fan base. He’s like a modern P.T. Barnum, a consummate showman who knows how to push the buttons of the fans. And it works, at least initially. The Bills have sold 60,000 season tickets this season. Now he’ll have to deliver.

Ryan, the outstanding defensive coach is already chalked full of quotable quips this week, he talked about facing “the hated Patriots”, then stating that his “game plan was done months ago” and that he’d “go home early this week”. And his best was tweaking new Patriots running back Dion Lewis on Monday, stating he couldn’t remember his name. To the long suffering fans in upstate New York, this is manna from heaven.

While he was with the Jets, his act wore thin; the constant over-the-top predictions and sound clips that play so well in Year 1 begin to be ignored by Year 4 if no sustained success is attained. His teams never won the division and although they always played Brady and the Patriots tough, ultimately he finished with a 4-9 record against NE.

But this is a new team and a new season and after a spanking of the AFC finalists in the Colts, the feeling is sky-high in Buffalo.

DL is the strength of the team and just got stronger: The Bills have arguably the best defensive line in football, and they used that to dominate the Colts on Sunday. They harassed Andrew Luck, bringing pressure and forcing him to get rid of the ball quickly and getting a couple of interceptions.

Now they should be even better getting Marcell Dareus back from a Game 1 suspension. Dareus just signed a 7-year $104 million dollar extension that will pay him a guaranteed $60 million. He should be a motivated player on Sunday.

Taylor Impressive in Debut: New Bills starting QB Tyrod Taylor had a nice start to his tenure in the win over Indy. He completed 15-19 passes for 195 yards including a beauty of a 51-yard bomb to Percy Harvin for a touchdown and added nine rushing attempts for 41 yards including a big 31 yard scamper.

The Bills are hoping that offensive coordinator Greg Roman can recapture the magic he had with another fleet-footed quarterback, 49ers QB Colin Kaepernick, in making the Bills a multi-dimensional offense.

Rex Ryan wasted no time in dumping superlatives on Taylor, who prior to 2015 was a backup to Joe Flacco in Baltimore and biding his time waiting for a shot.

“At the end of the day,” Ryan said. “This guy’s got some magic to him with his legs.”

“He beats you with his arm,” Ryan added. “He’s smart. You can’t trick him. I mean, it’s hard to trick him. Obviously, he has that added dimension with his legs. You know, he’s great. He’s got a great feel for it. … The great ones, they just got that presence. He has a presence to him.”

While it is a bit early to be declaring him magic, Taylor put together an impressive debut. Now he’ll get another chance to prove himself in front of the hometown fans against one of their most heated rivals.

McCoy, Watkins Have Quiet Debuts in 2015: One of the more interesting aspects of the Bills victory in their opener was the fact that neither Shady McCoy nor Sammie Watkins had a big role in the team’s success.

McCoy only had 41 yards rushing against a suspect Colts defense known for being gashed by the run. And Watkins wasn’t targeted once in the Bills passing offense, which only threw the ball 19 times on Sunday.

Expect both of these players to have a much bigger role on Sunday against New England.  Watkins will probably draw Malcolm Butler in coverage after going against Vontae Davis and should be involved early. Look for McCoy to get more touches as well.

Linebackers Still a Question Mark: For a Bills team with a loaded DL, there were questions coming into 2015 about the secondary and the linebackers. Rookie CB Ronald Darby played well in the opener and picked off Andrew Luck.

But if Brady and the Patriots are going to have success on Sunday, it will have to be against the very aggressive Darby and more importantly the Bills linebackers. On Sunday MLB Preston Brown and WLB Nigel Bradham played every defensive snap. They are aggressive downhill types and want to shoot gaps and make plays in the backfield.

That aggressiveness will have to be used against them as well as using TEs Rob Gronkowski and Scott Chandler to force them to cover. We’ll have more on the matchups this week in our Razor’s Edge breakdown, but that will be one to watch.

This week promises to be a great one to watch, stick with PatsFans.com for all the leadup to the Bills game as well as post game analysis and interviews with Bill Belichick and Tom Brady this week.

By: Robert Alvarez
Devin McCourty will appear in his 200th career NFL game on Thursday night against the Buffalo Bills, Robert Kraft honors his milestone.
43 mins ago