7 years ago at 10:26 pm ET
Follow @bob_george
Posted Under: Uncategorized 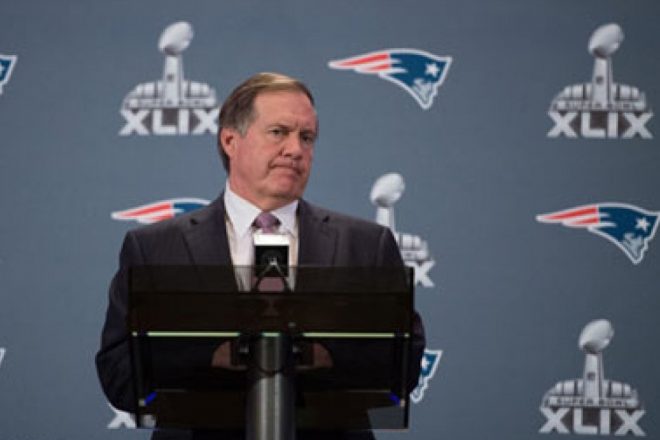 Dan Carpenter is ready for the Patriots. Energized by his new head coach and heightened expectations in western New York, he booms one out of the end zone, and another season has begun. Football fans everywhere, rejoice.

Talk to me in December about division standings. Sorry.

Pete Carroll can’t buy a break. Now we know why he called for a pass. Right?

Or maybe he still isn’t over LenDale White getting stuffed at the Rose Bowl against Texas.

Mariota versus Winston. Not even close.

To all those experts who thought Jameis was more NFL ready than Marcus, a supply of crows is being sent to your house for dinner over the next four nights.

But make sure you carpe with fewer turnovers.

At some point, the Patriots have to come to grips with the fact that they let a backup running back gash them for 127 yards rushing. What will happen when the first teamers have their shot?

Simple. Call Houston. Trade Vince Wilfork back to us.

Geek of the week: Mike Tomlin has more to worry about than Bob and Zo in his headphones. Like, get a defense.

Good news for Packer fans: James Jones is back.

You saw Eli Manning throw the ball away late in the fourth quarter, and all you could think was “Where was that play calling stupidity in those two Super Bowls?”

Meanwhile, the Patriots get Dallas and that offense that pulled off those two quick scoring drives to win in three weeks.

Nice comeback win by Miami. But they need to shut up and show that they can beat a better team than Washington.

Back to school: How ‘bout them Rebels. 149 points in their first two games. Ole Miss dropped 70-plus on both Tennessee-Martin and Fresno State. Next up: Alabama. How much sleep is Nick Saban losing? Maybe a minute or two.

When your Patriots don’t play on Sunday, you can sit back and watch the games like Tom Brady did.

Just for the fun of it, next time the Patriots don’t play on Sunday, watch as many games as you can and count how many times you say something like “Gosh, what a stupid play that was!”

And drink the good health of the guy who owns a boat named VI Rings.

Joe Flacco makes Denver fans sick. He almost did it to the Broncos again.

Meanwhile, Peyton Manning is getting that much closer to a professional career of stupid commercials only. The football part is still hanging in there, but you can see the light at the end of the tunnel.

The last thing Derek Carr needs to be doing is trying to stiffarm someone with his throwing hand. After Carr, what in the world does Raider Nation have to identify with or root for? Sebastian Janikowski?

By the way, Janikowski and Charles Woodson (who also gut hurt on Sunday) are still Raiders. They both played in the Snow Bowl as Raiders. And they say most NFL careers are only 3-4 years.

Remember it: Long before there was a Ralph Wilson Stadium (formerly Rich Stadium), there was old War Memorial Stadium in Buffalo. This old edifice was actually in Buffalo, not in the burbs. Fans used to bring in grills, food and beer and get rowdy as all get out. The old iconic grandstand, the wooden fence around the perimeter of the field, the memories of Jack Kemp and Cookie Gilchrist, it’s an old and wonderful AFL memory, and it’s a shame it doesn’t still at least exist today. The Bills left there after the 1972 season, and moved into Rich Stadium with newer seats and modern amenities. But ask old Bills fans if they still miss the old place, and they’ll tell you stories that will hold your attention.

Philadelphia has a terrific offense. Any Chip Kelly offense is terrific. They should easily contend for the Super Bowl. They are loaded. They may never lose a game.

But they did. Somehow, they lost to Atlanta. How? We’re not sure. Maybe too many penalties. But the Falcons looked gassed in the third quarter. And the Eagles still didn’t close the deal.

Teddy Bridgewater had a great preseason. He was in a road venue where the home team had problems winning last year.

Oops. Looks like the 49ers finally figured out how to play well at Levi’s Stadium.

Where was Roger? One of the few smart things he’s done in recent years. Going to Gillette Stadium might have been suicide for Goodell.

Look at it this way. In early 1979, the Massachusetts drinking age went up from 18 to 20. No more (legal) keg parties at UMass. Then-governor Ed King sent a “representative” to the UMass commencement ceremonies in 1979 and 1980 instead of attending himself like Mike Dukakis did. King wasn’t stupid. His name was lustily booed both years. King would have been lynched.

Let’s hope that when Super Bowl 50 rolls around, several of these players run their total to two. Or more.