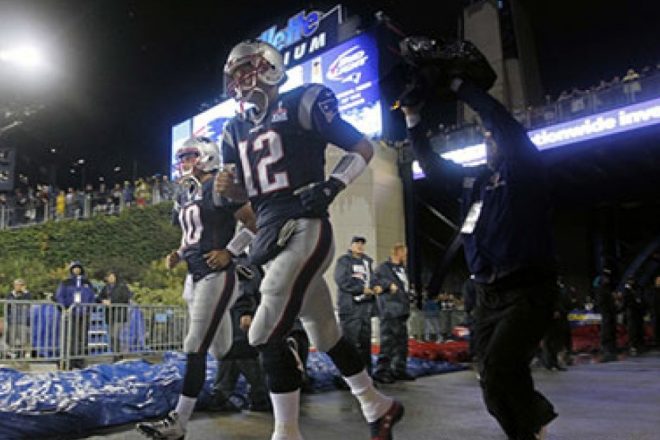 The moment everyone was waiting for. The Patriots unveil the 2014 Super Bowl Championship banner to the backdrop of Hip Hop artist T-Pain singing “All I Do Is Win ” with the Springfield Symphony Orchestra.

The entire banner unveiling can be seen below.

A secret before the game, the fans received cards at their seats that displayed this message across the stadium.

A friendly reminder from the @Patriots that they are the Super Bowl XLIX Champs #NFLKickoff #PITvsNE pic.twitter.com/rOEBBjbxHA

The Patriots also passed out small miniature, replica banners of the banner that would have been raised if Tom Brady still had to serve his four game suspension.

THIS is the banner the @Patriots would have unveiled tonight if Tom Brady did not play @nflnetwork pic.twitter.com/VemK9oNyY6

And lastly before the game came to it’s conclusion, the fans had a QUESTION for the NFL Commissioner who decided to skip out on the event for the first time in his tenure at the position.

Overall it was a fun and successful return to football for the defending champions and their fans, closing the book on the 2014 season and earning their first win of 2015 by a final score of 28-21.

The Patriots are on to Buffalo September 20th.