7 years ago at 12:51 am ET
Follow @bob_george
Posted Under: Uncategorized

FOXBOROUGH – All this worry about no Darrelle Revis and Brandon Browner, and the second string running back gashes the Patriots instead.

Thank goodness for Steeler mistakes and the fact that Tom Brady is Tom Brady no matter what.

The gala opening night for the 2015 NFL season took place at Gillette Stadium for the first time since 2005. Amidst the fireworks, parading out the four Lombardi trophies and unveiling the new championship banner, the Patriots had a bit of a struggle with the Pittsburgh Steelers. The Patriots managed to prevail, 28-21 on Thursday night, but the game featured substandard defense on both sides of the ball, and only the Steelers’ inability to finish drives in the first half allowed the Patriots to claim victory.

In the end, Pittsburgh did more to lose this game than New England did to win it. New Pittsburgh kicker Josh Scobee, late of Jacksonville, missed his first two field goals which killed otherwise very efficient and productive drives by Ben Roethlisberger and the Steeler offense. The first of those drives was further curtailed by a failed double pass by Antonio Brown, who got nailed for an eight-yard loss by Malcom Brown. Big Ben had a fourth quarter interception on an ill-advised pass. The Steelers had lousy clock management in the final two minutes of each half. Darius Heyward-Bey caught a touchdown pass late in the first half, but forgot to keep his feet in bounds in doing so.

When you examine the raw numbers, the Patriots were lucky to hold Pittsburgh to only 21 points. Roethlisberger finished 26 of 38 passing for 351 yards and a touchdown. Brown and Heath Miller combined for 17 catches for 217 yards receiving. D’Angelo Williams, the fill-in for suspended running back LaDeveon Bell, rushed for 127 yards on 21 carries and a six-yard average. The Steelers outgained the Patriots, 464-361 total yards.

Of particular interest is Williams’ performance. The former Carolina running back continually found holes in the defensive line, and continually beat the outside containment for good gains. And this was with the belief that the Patriots would not be tested in run defense without Bell in there. Instead, this now could become a concern for the Patriots. The front seven was upgraded in the offseason, but one has to wonder if the Patriots won’t start pining for Vince Wilfork, who was released in the offseason and is now with Houston. 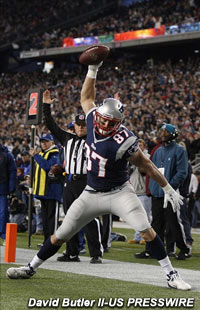 A bright spot for the Patriots was new running back Dion Lewis. He had 120 all-purpose yards, and looked every bit like the reason why Shane Vereen was allowed to walk without any squabble. Lewis did have a 20-yard catch in the fourth quarter end with a fumble, as Mike Mitchell stripped the ball just before Lewis reached the goal line. Gronkowski recovered the fumble at the one and scored three plays later, but Lewis will hear about that fumble all week long.

The Patriots benefitted from Steeler mistakes and confusion all game long. In addition to the aforementioned gaffes, the two second quarter touchdowns were helped greatly by mistakes on defense. Gronkowski’s first touchdown came off of a quick snap from Brady, who noticed that nobody on the Steelers knew where to line up or who to cover. On the play before Gronkowski’s second touchdown, Edelman caught a four-yard pass with only ten defenders out there. Longtime Steelers defensive coordinator Dick LeBeau seemed to be sorely missed on those two plays.

The game was probably decided in the first half. The Steelers outgained the Patriots, 212-200. Roethlisberger hit Heyward-Bey for 43 yards and Brown for 37 yards. Williams had 54 rushing yards. But all the Steelers could muster was a last-second 44-yard field goal by Scobee.

The Patriots caught another break in the fourth quarter. The Steelers had first and goal at the Patriot one. But a false start penalty on Kelvin Beachum and a stuff of Williams by Jabaal Sheard helped to hold Pittsburgh to only a chip shot field goal by Scobee.

The Patriots look to be a defense which, as predicted, will give up a lot of yardage between the 20s, and then stiffen once the opposing offense gets inside the Red Area. For the most part, the Patriots succeeded. The final score is a bit misleading because Roethlisberger was able to hit Brown with an 11-yard touchdown pass with two seconds left, the touchdown being of no consequence whatsoever unless you are a bookie or run a sports book.

The win gets the Patriots immediately into a good frame of mind. Fans in the fourth quarter happily chanted “Where is Roger?”, in reference to the absent commissioner, Roger Goodell. Goodell said a few days ago that he would miss the game, which despite coming off as gutless was actually a good decision. Seeing Brady out there playing so well and the Patriots getting an opening night win only added to the festive celebration.

The Patriots now travel to Buffalo, and their first encounter with former Jet nemesis Rex Ryan. The Bills might be the most improved team in the division. The tough Bills defense will only get tougher with defensive stalwart Ryan as head coach.

But they head out there 1-0, buoyant, refreshed, and defending champs. It was a wonderful, albeit rainy, night at Gillette Stadium. The new banner is up, the championship defense is well under way, and all is right with Patriot Nation. All those guys who missed the preseason look like they picked up where they left off in February.

And at the center of it all was Brady, freed from the suspension and ready to whip tail on the league. Life is good.