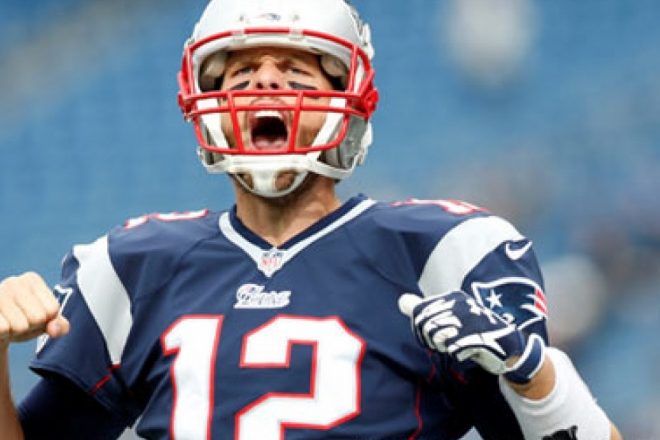 It’s all about to start all over again.

When the Patriots take the field tonight against the Steelers, fans will get to see the unveiling of the Super Bowl XLIX Championship banner prior to the start of the game and for the final time, both fans and players will be able to savor an amazing championship season.

Then, just like that, it all becomes meaningless and the new task at hand begins.

It’s been a long time since this team opened the season as defending Super Bowl Champs, with the last time occurring back on September 8, 2005 at home against Oakland in what was a 30-20 win over the Raiders.

That was an interesting offseason which after winning their third title in four seasons, saw offensive coordinator Charlie Weis head off to South Bend to become the head coach at Notre Dame, while defensive coordinator Romeo Crennel went off to Cleveland to coach the Browns.

This time around the Patriots don’t have to deal with any issues with their coaching dynamic and that’s something to take into consideration when it comes to trying to compare the last time this team was coming off of winning a title.

2005 Didn’t exactly work out too well, with the team finishing 10-6 and seeing Tom Brady lose his first career postseason game out in Denver. It’s hard not to wonder how difficult it was internally for this team dealing with that big of a turnover after losing their two coordinators on both sides of the football that season, but it’s something that should make defending their title a little easier this time around as both defensive coordinator Matt Patricia and offensive guru Josh McDaniels are coming back with Belichick for another season. 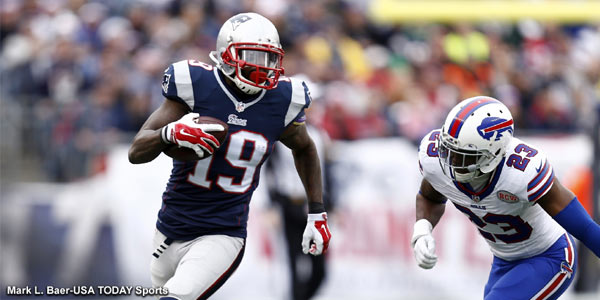 But from a personnel standpoint, there will obviously be some challenges. The team is without receiver Brandon LaFell (pictured above) for the early part of the season after he’ll start the year on PUP, and reports on Wednesday saw center Bryan Stork get the injured reserve designation that will keep him out for an extended period to recover from his concussion, while still allowing him to potentially return later in the season. That will certainly cause some issues on the offensive line, which is already a work in progress again inside after seeing guard Dan Connolly retire over the offseason, which has the team still looking for a combination that works well again together up front. They’ll also be trying to block for a brand new group of running backs in Week one, as LeGarrette Blount will be a spectator tonight against the Raiders while he serves a one-game suspension, leaving guys like Dion Lewis and James White to try and emerge as effective players in this offense.

On the defensive side of the football, we already know that the secondary will be in the spotlight tonight following the loss of Darrelle Revis and Brandon Browner this past offseason, but up front there’s plenty of reason for optimism that they’ll at least be able to get after opposing quarterbacks after some terrific performances from a defensive tackle group that looks to be one of the deepest in recent memory. It’s a young group who, despite seeing the end of Vince Wilfork’s tenure with the team this past offseason, seems like they’ve got a ton of potential.

Overall this is Brady’s 14th straight opening night appearance and he’s 11-2 all-time to start the season, the best record among quarterbacks on opening day during the Super Bowl era. He’ll face a team that he’s had some success against, posting a 5-2 record during the regular season against them as well as having beat them twice on the road in AFC Championship games. The last time the Patriots opened the season against the Steelers was back in 2002 at home at Gillette Stadium coming off their first Super Bowl championship, beating Pittsburgh 30-14.

There will likely be plenty of emotion tonight for the Patriots when they take the field given what they’ve had to endure this offseason, but having their season start out at home with a crowd that should be amped up when Brady hits the field should hopefully give them some momentum to get things started on the right foot.

Fortunately, none of the DeflateGate talk matters anymore and the best way to eliminate the doubters is to go out there and win football games. Thankfully Brady and the Patriots will finally get that opportunity tonight.

One thing that likely gets overlooked is the amount of time and effort that goes into the preparation for each week and the grind that all of the players go through in order to win football games. Sixteen weeks is a long time to put in the mental and physical preparation it takes in the NFL to win in this league, and this is a football team that has done an incredible job of maintaining a steady approach week-to-week to keep everyone together and focused on the task at hand. 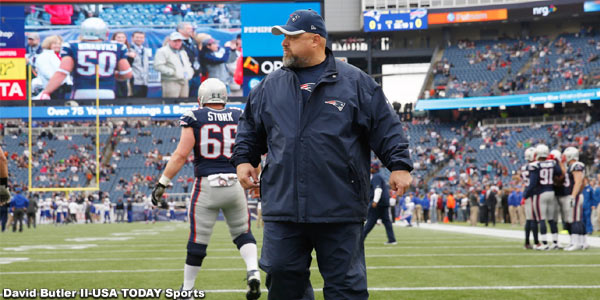 As fans may have noticed on the “Do Your Job” special that aired on NFL Network Wednesday night, it’s a group that truly believes and works well with each other. The culture as a whole in New England is special and as you listened to some of the discussions during each of the interviews and the audio that was captured, every player in that locker room believes in and appreciates the guy next to him.

That’s something that offensive line coach Dave DeGuglielmo (pictured above) pointed out during Wednesday’s special on NFL Network. Guys that play here really care about each other.

“It’s O.K. to tell the guy next to you, if you really believe it that, ‘Man, I love you, I’ll do anything for you’ and that’s what they have here,” said DeGuglielmo. “That’s why the New England Patriots win football games.”

Doing some research from the 2004/05 offseason, I had forgotten all about the fact that Brady’s third Super Bowl win brought the quarterback a new six-year, $60 million contract and it was an incredibly team-friendly deal that was significantly less than what guys like Indianapolis Colts’ Peyton Manning (seven years, $98 million), the Atlanta Falcons’ Michael Vick (10 years, $130 million), the Minnesota Vikings’ Daunte Culpepper (10 years, $102 million) and the Green Bay Packers’ Brett Favre (10 years, $101 million) had signed.

However, the even more surprising, and refreshing part, was the reaction by Brady why he took less money.

“I don’t get excited about cashing a check,” he said at the time via USA TODAY. “I get excited coming here and having friends I can play with and enjoy being around. I can be part of something bigger than myself.”

He’s enjoyed a lot of success as a result of that approach and it was obviously terrific to see both Brady and the Patriots win another title ten years later. Now he’ll try and see if he can’t win one more as they get set to try and do it all over again tonight.