4 years ago at 9:57 am ET
Follow @IanLogue
Posted Under: Daily Patriots Notebook

It’s a quiet morning on this Tuesday, but here’s a look at today’s top stories.

Brady Not Planning on Being a “Regular Participant” in team’s offseason program – There was more buzz on Monday about Tom Brady’s offseason plans, which right now don’t seem to include much during the voluntary part of the workouts.

According to a report on Monday by Jeff Darlington, Brady isn’t reportedly planning on being a regular participant in the team’s offseason program, with the plan being to “spend more time with family and body coach Alex Guerrero”.  Darlington has since appeared on SportsCenter, and took it a step further, saying Brady may not attend any part of it.

“I would go so far to say that I would call it unlikely at this point that he is a part of any of the voluntary program this offseason,” Darlington said via the Boston Herald. “How far he extends that is a major question, one that I don’t even know Brady has the answer to. But for now, we should definitely at least not anticipate that he is a part of this week and likely moving forward.”

The latest on Tom Brady and why I don’t anticipate his consistent attendance at the Patriots’ offseason program… with a little bit of Gronk mixed in: pic.twitter.com/VdghK0v6ml

That has many wondering what that means given that Brady has been one of the more noticeable faces in and around Foxboro this time of year in past offseasons, but his decision to skip this year’s isn’t completely unprecedented.  As Darlington points out, Brady did miss parts of the team’s past offseason programs back in 08, 09 and 10, although that’s not to say this year certainly does have different circumstances surrounding it.

Like it or not, part of it likely does stem from the restrictions placed on Guerrero by Bill Belichick, who drew a line in the sand last year between Guerrero and the training staff when it came to Guerrero’s presence at the facility and on the sidelines, which reportedly started some of the friction between the two.  The other part is the fact that at 40 years old, Brady’s desire to focus on his family is likely the other factor.  He’s emphasized in the past just how much currency he places on his time, especially given that during the season, he has little to give since all of his energy and focus is devoted to the game he loves.

Brady brought that part up on more than one occasion during his “Tom vs Time” documentary, and for those who follow his Instagram feed, most of his time this offseason has been spent with his wife, Gisele Bundchen, and his children.  While Brady recently took part in a trip to Qatar as part of a partnership with his foundation, Best Buddies, his family was along for the endeavor and it’s obvious that it meant a lot to him to be together with them.

Make no mistake, the working environment right now may not be perfect, but you can bet that when the mandatory periods begin, Brady will be there.  You’ll see the same energy and devotion being put in by the veteran quarterback when both Brady and Belichick’s interests, once again, align and the work begins.  But for now, Brady will spend what little time he has left getting his body ready with Guerrero and squeezing out some additional time with the people who will be supporting him at home when the page is turned and he’s forced to spend time away to start on getting ready with his coach and teammates for the upcoming 2018 season. 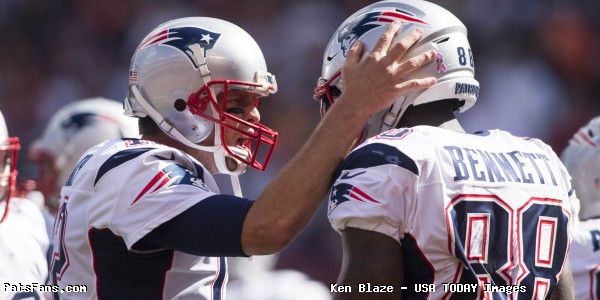 Bennett with strong praise for Brady.

Bennett Talks About Brady’s Leadership – This has been mentioned here previously but from the time Brady became the starting quarterback in New England, one of the things players gave him credit for was the fact he was relatable from the top to the bottom of the roster. The quarterback has never been someone who players considered unapproachable despite the “cliques” that tend to develop in an NFL locker room, especially among high profile players.

That was something we finally heard about when Brady supplanted Drew Bledsoe as a starter in 2001, which likely played a part in the chemistry and confidence that seemingly developed so quickly when his run of success started and led to a Super Bowl.  Every guy on the roster likely felt like he was one of them, making him an easy guy to get behind.

Fast forward to where we are now and it sounds like Brady really hasn’t changed.  While appearing on ESPN’s “First Things First” former tight end Martellus Bennett talked about a meeting prior to the AFC Championship game against the Steelers that opened his eyes on just how special a person and teammate Brady really is.

“I love Tom. Tom’s one of my good friends,” he said via USA TODAY. “Example on Tom — we were getting ready to play the AFC Championship against the Pittsburgh Steelers. And they ain’t stand a chance because of this night. We were having night meetings because we were playing at night, and all the coaches leave and Tom stands up in front of the team. And in that moment he said a compliment for every single guy on the team that meant something for that guy, as a person and a player. From scout team to Gronk — he knew every single player, what they had been doing, how they were developing, where they were at. And I’m in there like, I’ve never seen anything like this.”

That’s not exactly surprising news about Brady, who has always been a consummate teammate and professional.  Success hasn’t changed him and just like when he started, his ability to have guys rally behind him so quickly on the field remains one of his best traits as a leader on this football team.

The may be a great player, but it’s the things we don’t necessarily see that are the reason why he’ll likely go down as the best to ever play the game. Needless to say, despite whatever issues he may have right now, it’s a reminder that it certainly won’t trickle down to the guys in the locker room or be an issue when the team begins preparing for the upcoming season.

According to NESN, Wendell, who was running on behalf of former Patriot Joe Andruzzi’s Foundation, finished at 5 hours, 54 minutes and 31 seconds.

Wendell reportedly started getting himself ready last October and joked that the first time he ran a mile, it was a challenge.

“It was brutal,” he told Boston.com.  “I thought I was going to have a heart attack.”

Now here he is one year later having accomplished quite an impressive goal.  Andruzzi’s foundation was reportedly going to have a party at Uno Pizzeria & Grill afterward, to which Wendell joked that he planned on indulging himself.

“I’m already thinking about crushing a whole pizza by myself,” he said.

He definitely deserves it.  The conditions were tough as it was held on a gray, rainy day but that didn’t stop Wendell and everyone who participated from gutting it out.  As for the winners, it was Yuki Kawauchi from Japan who won it for the men, while American Desiree Linden won it for the women, running a time of 2 hours, 39 minutes and 53 seconds.

Linden’s victory was historic as she became the first American in 33 years to win the event. 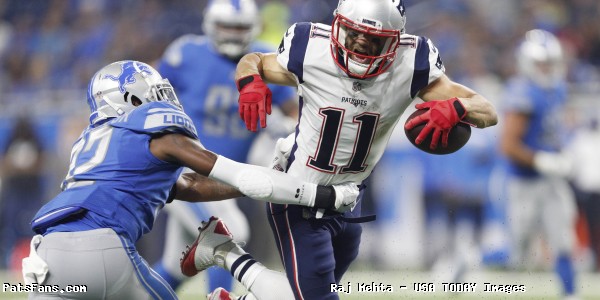 Edelman went down just minutes into their Week 3 match-up against the Lions in 2017. (USA TODAY Images)

Edelman On Hand at Workouts – While Brady and Rob Gronkowski’s absences were a big topic of discussions Monday, there was one face back in Foxboro that should have most fans feeling pretty good after not seeing him in 2017.

Julian Edelman was reportedly present at Monday’s workouts, with Mike Reiss of ESPN pointing out that the veteran receiver is on his way to earning a $500,000 workout bonus, which is among the highest on the team.

Edelman missed the 2017 season after suffering a season-ending knee injury against the Lions during the preseason on the team’s opening offensive drive. The only good news was that since it happened so early, Edelman’s had plenty of time to go through the rehabilitation process and all signs seem to be positive at this point. That’s good news for a team that following the loss of Danny Amendola, will need him to be healthy and productive in their offense again in 2018.

By: Ian Logue
New England Patriots news and notes for Wednesday 8/10.
7 hours ago

By: Mark Morse
Observations from the latest Patriots practices and some additional notes.
1 day ago

By: Ian Logue
New England Patriots news and notes for Tuesday 8/9.
1 day ago