The timing of ESPN’s Outside the Lines story on Tuesday, which dredged up some new/old facts from the SpyGate controversy of 2007, was curious to say the least, especially coming off of the league’s defeat in court to Tom Brady last week.  But taking a step back from the chaos created by the article, there ended up being one big reminder for those who stayed up and watched “America’s Game” on NFL Network Tuesday night.

The reminder, for those who are rational thinking people and are willing to accept logic and reason over theory, was that there’s no way to cheat your way through 15 years of dominance.  It requires hard work and preparation and the ability to make plays when they count the most.

It was hard not to notice that parallel during last night’s broadcast coming off of a report which alleged opposing teams needed to be worried about the Patriots in regards to what they left lying around in the locker room.  The report claimed, “a low-level Patriots employee would steak into the visiting locker room and steal the play sheet, listing the first 20 or so scripted calls for the opposing team’s offense.”  However, on the final play for Seattle in the Super Bowl, it was advanced scouting and a play in practice that prepared Malcolm Butler for that moment, not a stolen play sheet.  Last night’s practice video of Butler wasn’t a revelation by any means since that footage had already been released, but watching Butler face that same play leading up to the Patriots championship win, it was a reminder of why this team has been so consistently great during Bill Belichick’s tenure here.

Here’s a field-level angle of Butler’s big moment, which was shot by WFXT-TV’s Bryan Salmond, that allows you to really see him break on the ball.

Players talk all the time about what a great job the coaching staff does when it comes to putting together game plans, and the fact that whatever Belichick and his staff come up with, it always allows players the best opportunity to be productive.

“It all goes back to the game plan,” Chandler Jones said back in January. “Coach Belichick put us in great positions to make plays. That’s what it is.”

And that’s really what it’s about.

Teams can act innocent all they want, but former Patriot Willie McGinest, who is now an analyst on the NFL Network, admitted Tuesday night that the Patriots had someone responsible for going into their own locker room after practice sessions and cleaning up all the game plans, playbooks, etc. as well as wiping down the white board, and then would have to stay behind to keep an eye on things.

It’s gamesmanship at it’s best and there have been plenty of stories about other methods used by coaches as it pertained to gaining an advantage.  Some people seem to think that Bill Belichick was the one who invented the practice of videotaping opposing signals, but during a 1992 broadcast John Madden even went so far as to discuss the practice, which was commonplace and something teams had to be ready to deal with.

But either way, when it comes to coaching and trying to be ready for every situation, Belichick has repeatedly been considered one of the best by players who have spent time within this organization.  Former Colts receiver Reggie Wayne was recently released at the end of training camp, with the two sides agreeing to publicly call it a mutual decision.  However, it later came out that the amount of work involved to play here may have been too much and the veteran reportedly left because playing here was “not fun.”

No, it’s not.  Players that are here are asked to do a lot and they work harder to do it better than anyone else.  That’s the reason this team hasn’t experienced a losing season since 2000, and that’s the reason why the Patriots will likely be in the mix yet again by the end of this season.

YOU CAN’T EVER COUNT OUT TOM BRADY:

Reliving the Kansas City  41-14 blowout loss Tuesday night, it was a strong reminder of the fact it’s so important not to make any snap judgment based off of a single performance.  Looking back at how much Tom Brady struggled in that contest (14-of-23 for 159-yards, a touchdown, and two interceptions), very few people would have likely admitted that they would turn things around so well after that game and begin a march toward a fourth championship. 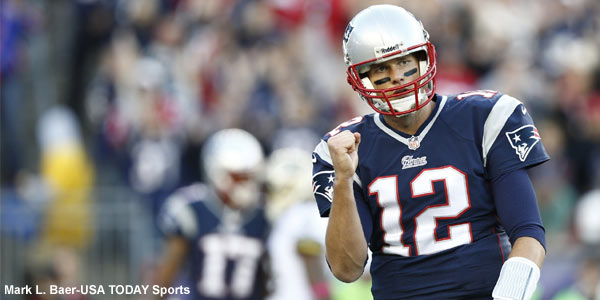 The whispers about Brady’s future started that week, but he silenced the doubters and Julian Edelman admitted in the “America’s Game” broadcast that it’s something Brady feeds on, and he hopes that people continue to doubt him because it only fuels him further.

“You have one of the best quarterbacks, probably the best quarterback of all time, it’s just kind of ridiculous that people jump off that bandwagon,” said Edelman.  “And I hope they keep on doing it because it just fires him up.    He’s that kind of guy.  So all the people out there that do that, keep it coming because he likes that stuff.”

Following his first media appearance since the Super Bowl on Sunday, Brady was back for his weekly radio appearance on WEEI and was a little more candid, although still opting to choose his words carefully.

One interesting part of the exchange was his reaction to being asked about whether or not he thought he was set up by the NFL.

“I have a lot of personal feelings about this, and I think to get into every conversation that everybody wants to have — and I’ve had a lot of these conversations with different people over seven months — and you get brought back into those emotions, and those haven’t been the best emotions,’’ he said. “They certainly don’t serve me as the quarterback for the New England Patriots quarterback this week.”

The big thing not said in that response was the word “no”, which obviously shows you that he’s still not pleased with how everything played out.

He also admitted when asked if he’d scale back his appearances with outlets such as ESPN or the NFL Network that he’s not sure how he’ll approach them.

“I don’t know exactly how I’ll approach those things each week,” said Brady. “It’s a long season anyway, but the more things that I do — non-Patriot related, really to help other people out — you’re right, those things take away from the energy that I may have to do other things.

“I get a lot of requests. Things that may be public or private, and then I just try and make those decisions based on how the week is, but it’s hard to fulfill them all. We’ll see how that goes this year.”

CADET MUST HAVE IMPRESSED COACHES:

After missing all four exhibition games, running back Travaris Cadet managed to avoid the final cuts and earn a spot on the 53-man roster, which is a testament of how much faith the club seems to have in him.

Cadet finds himself in a good situation as no clear-cut starter has emerged below LeGarrette Blount, who is expected to be the team’s lead back for 2015.  Having the coaches believe in him is something he’s definitely appreciative of, but Cadet knows preparation ultimately trumps out and he’ll need to work hard if he hopes to stay.

“It runs across your mind,” Cadet told the Boston Globe Tuesday when asked if the days leading up to the final roster cuts were difficult. “But I’ve been in this league, this is my fourth year. I’ve just learned to worry about the stuff that you can control, and that’s being prepared, being in top condition, knowing your assignment, knowing the plan, knowing your opponent before you get out there. Just have to keep your foot on the gas pedal.”

Considering the Patriots situation at running back without a sure starter behind LeGarrette Blount, it appeared New England saw a big opportunity when Bills running back Fred Jackson was released back on August 31st.

According to The Buffalo News’ Tim Graham, Jackson revealed that the New England Patriots and Seattle Seahawks called him “within an hour” of the move. Jackson ultimately ended up out in Seattle on a one-year, $900,000 contract, and was just glad there were teams who still wanted him.

“It revitalizes you,” Jackson told Graham. “Instead of being down in the dumps and feeling sorry for yourself, you say, ‘I know teams think I can still play.’”

OTHER NOTES: The Patriots named their captains for 2015 on Tuesday, with Brady, linebacker Jerod Mayo, defensive end Rob Ninkovich, safety Devin McCourty and special teams ace Matthew Slater, as well as offensive linemen Nate Solder and Ryan Wendell earning the honor for this season. … Patriots center Bryan Stork sat out practice again on Tuesday, likely signaling he’ll be sidelined when the Patriots open the 2015 regular season against the Steelers.  David Andrews got quite a few first-team snaps during the preseason and Ryan Wendell is another player that can certainly step in if necessary. … Former Patriots running back Jonas Gray cleared waivers following being cut at the end of training camp, but he finally found a new home Tuesday after landing down in Miami with the Dolphins.  It’s a reunion of sorts for Gray, who signed with the Dolphins as an undrafted free agent in 2013 and went on the PUP list while rehabbing a knee injury before they cut him prior to the season.  The news comes one day after working out in Tennessee for the Titans, who opted to pass on him. … Former Patriots and free agent LB Brandon Spikes’ hit and run while he was here in New England will cost him four games, with ESPN’s Field Yates reporting that he’ll be suspended as a result of the incident. … The Patriots signed former Seattle Seahawks linebacker Alex Singleton to the practice squad on Tuesday.

READ NEXT:
Three Keys to Victory: Patriots Set to Battle Steelers To Kick off 2015
Posted Under: Patriots Commentary