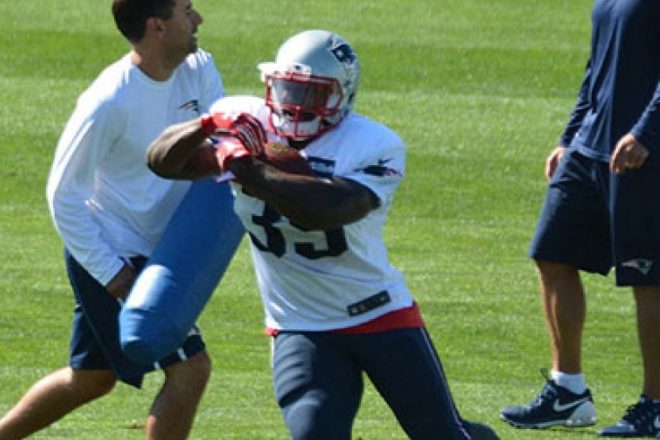 The New England Patriots announced on Saturday afternoon that they have released 11 players and placed WR Brandon LaFell on the Reserve/PUP list to reach the 53-man limit.

Gray was perhaps the biggest surprise of the day; he had that monster game of over 200 yards against the Colts last season and then fell off the face of the earth. He rebounded with a strong camp including a highlight reel 55 yard touchdown run against the Packers in the first preseason game.

It is being reported that Wayne asked the Patriots for his release. The story has been changing constantly. Initially, that Wayne was contemplating retirement, and then later we heard that he’d continue his career in the “right environment” and finally that the Patriots practice habits are “too hard” and “not fun”.

With LaFell on PUP and Wayne and Saunders being cut, it leaves the Patriots thin at the WR position with Julian Edelman, Danny Amendola, Aaron Dobson, Chris Harper and STs ace Matthew Slater. However, during camp the team did experiment with Travaris Cadet and splitting him out wide,…which could be an option.

Coleman was signed yesterday and was quickly released today. The rumors are that the team will attempt to sign him to the practice squad tomorrow. McClain was a mild surprise. He was small in stature but a physical presence on the practice field.

Zach Moore was trying to complete a move inside at DT from his natural DE position this season. King was an UDFA rookie from Auburn who received a lot of one-on-one instruction from STs coach Joe Judge. He’d be another good candidate for the practice squad; But for now the Patriots are keeping six safeties which means that we’ll probably see a safety in nickel much more in the early going.

This is an initial 53-man roster, expect plenty of changes this week as well as during the season as the roster, especially at the bottom end always tends to be fluid.