7 years ago at 6:49 am ET
Follow @SteveB7SFG
Posted Under: Patriots Commentary 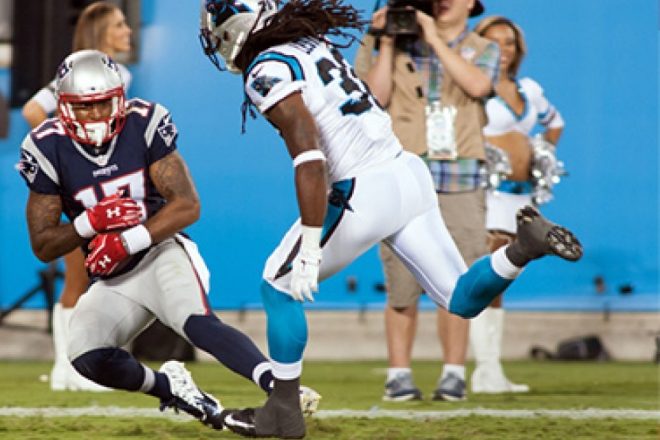 The only surprise cut was linebacker James Morris, the UDFA from Iowa spent time twice with the team last spring/summer before ending up on IR. During this season’s preseason, he was one of the most players with the most defensive snaps.

The team also came to an injury settlement with tight end Jake Bequette which effectively cuts ties to him.

The team also announced that it signed cornerback Justin Coleman, an UDFA out of the University of Tennessee. The 5’11, 185 pound Vol alum was recently waived by the Vikings. Coleman posted a 6.61 time in the three cone drill.

You can read Dane Brugler’s Pre-draft scouting report on Coleman below: 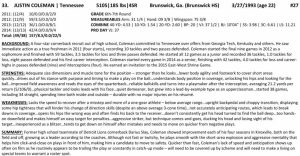 With the final cuts looming, some interesting decisions have to be made, most notably on offense with RB Travaris Cadet who was trying to win Shane Vereen’s former job as the third down back and WR Aaron Dobson.

Cadet seemed to be winning the job in camp but was injured close to a month ago and hasn’t been able to take the field. In his stead both James White and Dion Lewis have stepped up and been effective. Dobson is still searching for the consistency that the team is looking for out of him. He’s been fighting the ball and has trouble making a clean catch. But with the injury uncertainty of Brandon LaFell, he should make the team.

On defense the signing of nickel corner Coleman at this late juncture should at least make him safe for the 53-man roster for the first initial days of the season. But what does that mean to guys like Robert McClain or Logan Ryan?

Also on defense, one player who has stood out is Rufus Johnson. Will the Patriots be able to keep 10 defensive linemen and make a spot for him will bear watching.  Johnson has really stepped up his game in the preseason and would probably not clear waivers if the team wanted to keep him on the practice squad.

Safety will also be another key area to watch. The question comes down to either five or six safeties being kept. Devin McCourty, Pat Chung, Duron Harmon and rookie Jordan Richards appear safe. So it comes down to Tavon Wilson and Nate Ebner for the final spot if they keep only five.

The Patriots have practice on Saturday at 12:30 p.m. and whoever isn’t dressed for that would be a good bet to have been on the released list. Saturday marks the first regular season practice for the 2015 season as the team prepares for the Thursday night opener against the Pittsburgh Steelers.