7 years ago at 11:22 am ET
Follow @bob_george
Posted Under: Patriots Commentary

The good news is that all the top offensive dogs will be ready for the season opener. The bad news is Tom Brady still looks shaky.

Save for the final drive of the first half, Brady once again looked outgunned out there against the top Carolina Panther defense on Friday night at Bank of America Stadium. Brady suffered two interceptions and could never really get into a rhythm. Not until the last drive of the half, when he managed to connect with former Buffalo tight end Scott Chandler three times, the last of which was an 18-yard touchdown pass, was Brady able to walk off the field feeling somewhat good about things. The Super Bowl champs managed to win, 17-16, but Patriot fans wanting to see Brady break out and do what he does still aren’t satiated quite yet.

The third preseason game is always a dress rehearsal for the regular season. But it is the defense which is featuring all the potential starters, not the offense. Running the offense minus Julian Edelman, Brandon LaFell, Rob Gronkowski, Bryan Stork and Ryan Wendell is an unfair disadvantage for Brady. Legal proceedings notwithstanding, Brady might want to feel a little bit better about his feel for the offense as the team nears the September 10th season opener at Gillette Stadium against Pittsburgh. 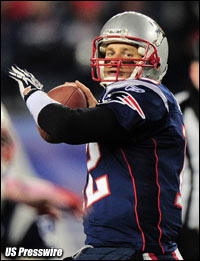 Tom Brady finally got his first first down and first touchdown pass of the preseason Friday night at Carolina.
(USA TODAY Images)

The Patriots are now 2-1 in the preseason, and other than the broken leg suffered by James Develin which most assuredly will land the fullback on injured reserve, the team is pretty healthy and in good shape. The focus of the preseason has mostly been on how well the defense moves on without Darrelle Revis and Brandon Browner, and how well Jimmy Garoppolo will fare at the helm of the offense if Brady has to sit out any games of his disputed suspension.

That said, here are some major issues and their current state right now.

Garoppolo started badly Friday night, throwing two balls that should have been intercepted. But he finished with 13 of 17 passing for 126 yards, one touchdown and a 116.3 passer rating. His touchdown pass, a 9-yard slant pass to running back Dion Lewis, was a nicely thrown ball and right on the button. Against a junior varsity defense, Garoppolo was steady but not spectacular. The Patriots will ask Garoppolo to manage the offense in any game he is forced to play if Brady is sidelined, and in doing so not to try and win the game singlehandedly. The most action Garoppolo has seen thus far in his brief NFL career has been in garbage time. Starting a regular season game is something he has no idea of what it is like. Of course, there is only one way to remedy that situation.

The top Patriot defensive unit looks very strong, and at times spectacular. Tarell Brown looks like he has the inside track to claiming the starting cornerback job opposite Super Bowl hero Malcolm Butler. The front seven looks to be outstanding, bolstered by the return of Jerod Mayo and the emergence of recent top draft picks Dominique Easley and Malcom Brown. Free agent Jabaal Sheard also looks to be a force down low. On Friday night, the front seven pressured Cam Newton most all game long. Newton was sacked twice and finished with only an 88.4 passer rating. Newton was never able to get into a rhythm save for a few slant passes to tight end Greg Olsen, who led the Panthers with six catches for 51 yards.

If there is any urgency in Aaron Dobson trying to make this team, we aren’t seeing it. Brady’s first pick wasn’t on Brady at all. He threw a nice deep ball to Dobson in the second quarter, but he had the ball wrestled away from him by Kurt Coleman. Dobson did catch a 40-yard right sideline pass in the fourth quarter which was followed by the touchdown to Lewis, but other than that Dobson was a non-factor and at times a liability. If veteran free agent pickup Reggie Wayne learns the offense and proves valuable enough to stick around, Dobson could be the prime casualty.

Develin isn’t a focal point of the offense, as fullbacks rarely are under Bill Belichick. But one has to wonder why Develin was in there in the fourth quarter of a preseason game. It’s not likely that Develin was playing for a job. The Patriots now lose a key blocker in short yardage and goal line packages. It just didn’t make sense that he was in there at that time of the game. If this injury occurs in the first half, it’s still unfortunate but a lot more forgivable.

If you recall last year following the Week 4 loss at Kansas City, a lot of the complaining surrounded the offensive line and not just Brady. Recently retired offensive line coach Dante Scarnecchia was interviewed and assured everyone that the line simply needed time to jell, and he was proven right. This year, the Patriots will no longer have Dan Connally, and have two young guards trying to crack the lineup. Draft picks Shaq Mason and Tre’ Jackson have been mostly good in camp and in preseason action, not astounding but rather merely promising. One of the two might crack the starting five a week from Thursday night. With Stork, Nate Solder, Ryan Wendell and Sebastian Vollmer intact, the dropoff/learning curve might not be as steep as it was last year. Of course, things worked out for the forlorn 2-2 Patriots after that humiliating loss.

Finally, one has to continue wondering whither Tom Brady. Neither side will give in and neither side should. Many legal experts think the NFL has the law on its side and Judge Richard Berman will have no choice but to rule for the NFL, and should therefore do nothing other than wait for the inevitable ruling. Brady doesn’t want any stain on his career resume, and he doesn’t want any chance for him to lose his job the way Drew Bledsoe lost his. This courtroom melodrama will likely climax in a ruling and not a settlement. It is up to Brady and the Patriots to be prepared for whatever happens, and be totally ready if Brady has to sit even one game.

By: Robert Alvarez
Devin McCourty will appear in his 200th career NFL game on Thursday night against the Buffalo Bills, Robert Kraft honors his milestone.
27 mins ago

By: Robert Alvarez
Robert Kraft lends the Patriots team plane to the University of Virginia so its players can attend the funerals of fallen teammates.
56 mins ago