7 years ago at 12:06 am ET
Follow @IanLogue
Posted Under: Patriots Commentary 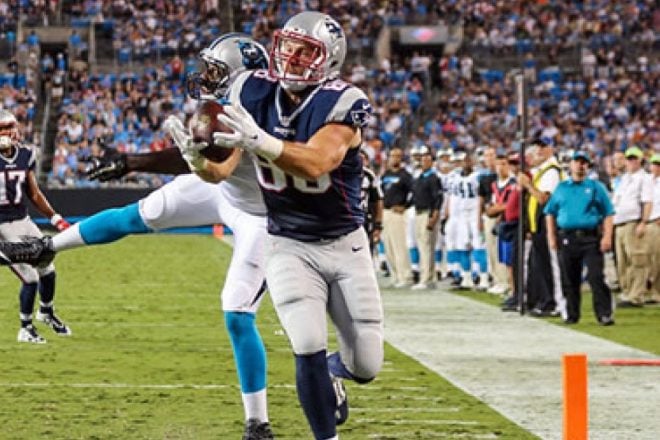 The Patriots have been without most of their top players for most of the preseason, but they saw a couple of potentially important players back in action after both tight end Scott Chandler and receiver Aaron Dobson were in action Friday night down in Carolina.

Chandler had the best night of the two, finishing with three receptions on four targets, including an 18-yard touchdown in the closing minutes of the first half following a nice arcing pass from Tom Brady which helped the Patriots take the lead 7-6 following two field goals by the Panthers.

For Dobson, there were mixed reviews.  He struggled early and never seemed to get in sync with quarterback Tom Brady, including two attempts that ended up being picked off.  The more frustrating of the two came after Dobson had appeared to make a terrific leaping grab on a deep throw down the middle of the field, only to have it get wrestled away from him as he hit the ground and the officials ruled it an interception.

However, the former Marshall standout hauled in a 40-yard pass from Jimmy Garoppolo in the third quarter, which helped set up a 9-yard touchdown from Garoppolo to Dion Lewis that pulled them to within two points at 16-14 with just over ten minutes to go in the game.

Dobson isn’t exactly a lock for a roster spot, but there were a few positives to walk away from that should set him up for an interesting final week after the way he finished the game.  He’s spent the last couple of weeks battling a hamstring injury and all indications seem to point to the fact he’s finally healthy at this point in training camp.

He saw a lot of action, playing early in the game with Brady and into the fourth quarter with Garoppolo.  Now the only question left as the Patriots start preparing for their final exhibition game at home against the Giants is whether or not he’ll still be in the locker room with them by the time the season starts.

He’ll get his final chance to try to prove he still deserves to be here next week.