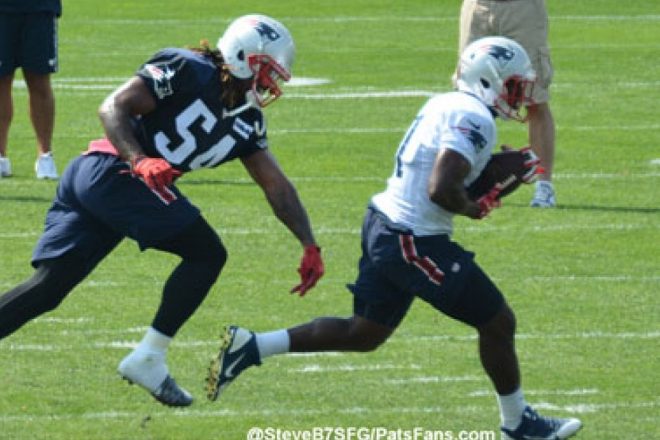 The Patriots conducted their 12th practice of training camp on Saturday morning in shorts and shells while the heat and humidity was high by the time the session was only halfway over. With temps in the mid-80s, temps got a bit short by the end of practice.

First round draft pick Malcom Brown and guard Ryan Groy got into a scuffle with Brown’s helmet coming off and then throwing a punch. Brown ran a lap thinking that was his punishment but both were banished to the locker room for the duration of practice. However both returned after practice to run conditioning sprints.

Several of the players injured in the Green Bay preseason game were not in attendance. They included Rufus Johnson, Trey Flowers, Darryl Roberts, Logan Ryan and James White.

But the good news was that Scott Chandler, LaGarrette Blount and Aaron Dobson returned to practice. Blount took part in team drills and seemed to be nearly 100 percent. Dont’a Hightower returned to wearing the blue jersey, shedding his non-contact red one which is a very positive sign moving forward to the start of the regular season.

Chandler, Dobson and Julian Edelman were with a number of players who, after warm-ups retreated to the lower fields for work with the training staff.

Cornerback Tarel Brown left practice early with what looked to be a heat injury.

DMac at Corner: One of the stories of the day was that Safety Devin McCourty was seen practicing for much of the day with the cornerbacks in lieu of the safeties. McCourty started his career as a cornerback before switching to safety. So while he’s had plenty of experience there, him practicing back there is big news.

But before everyone gets all gaga over the news, the answer may be simple. With so many of the corners missing practice with the injury bug hitting so hard, McCourty may just be filling in during practice to alleviate the sting. Still, it will bear watching.

Wide receiver Chris Harper had another nice day as did Brian Tyms. Harper made the most of his opportunities on Thursday night’s game catching seven passes for 48 yards on seven targets. He seems to be getting into a little bit of a groove here in the past several days.

While still working with the reserves and facing the third and fourth stringers on Thursday, Harper made an impact. That’s all you can ask a guy to do in his first opportunity to play.

I for one would like to see the team give him a chance to work with Tom Brady and the first team in 11-on-11 work to see what he can do. The downside to him is only that he doesn’t have the size of some of the bigger guys at 5’11, 185.

Harper is built a tad slighter and isn’t a big target or more of a deep threat like Dobson and Tyms. He’s more of a chain mover like Edelman and Amendola but production is what drives the train. He’ll be a guy to watch in the joint practices with New Orleans next week.

Tyms looked fresh and much sharper in his return to team drills today. It was one of his better practices in camp so far.

Play of the Day: In 7-on-7 work, Jimmy Garoppolo dropped back to pass and had no one open.  He rolled to his right and attempted to force the ball inside to TE Jimmay Mundine.  Linebacker Jamie Collins had tight coverage and as soon as Garoppolo let go of the ball Collins jumped the route for an easy interception.

Collins and Nate Ebner celebrated was some trash talking to the offense, but Garoppolo recovered quickly. On his next pass, he rifled a nice touchdown to Jonathan Krause in the back of the end zone.

The team is off on Sunday and will return to practice on Monday and Tuesday before leaving Tuesday afternoon for West Virginia where they’ll conduct two joint practices with the Saints prior to their preseason game in New Orleans next Friday.