7 years ago at 10:28 am ET
Follow @PatriotsHaven
Posted Under: Patriots News 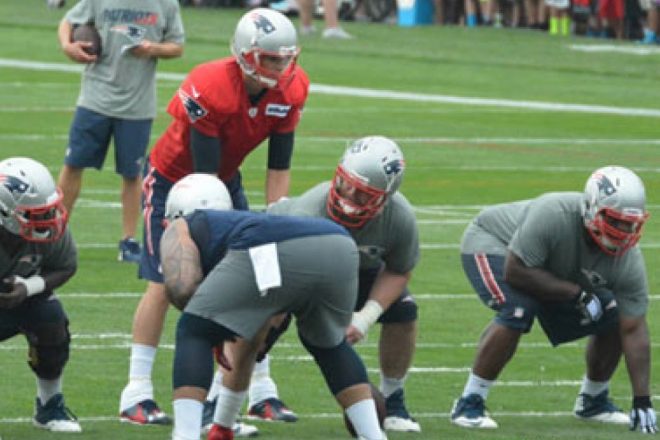 The New England Patriots were back on the practice field Tuesday afternoon for day five of training camp.

The team had Monday off, but got back to work with a large crowd in attendance and sunny skies above. Just prior to the start of Tuesday session, the team announced four signings; linebacker L.J. Fort, linebacker Cameron Gordon, fullback Eric Kettani and defensive lineman A.J. Pataiali’l.

Here are my observations from Tuesday. —

– A shorter practice as the team got back to work. While players were in pads and it was physical at times, not the same level of intensity as we’ve seen in the previous sessions. Not really a surprise, though, with the Pats gearing up for a big in-stadium practice Wednesday night.

–  Quick note: Cornerback Tarell Brown switched his jersey number to no.31, he was previously no.9.

– Wide receiver Brandon LaFell remains absent and running back Tyler Gaffney was missing Tuesday. Julian Edelman was at practice, participating in warm-ups, but went to the Empower Field House shortly after. He appeared to tweak his right ankle/foot on Sunday late in the practice.

Also, Brian Tyms was carted off towards the end of Tuesday’s practice. Not sure what the injury was, but it seemed to be a rib/arm/shoulder ailment. He had a great diving grab earlier in the day.

– A tough day for the offense in general. Tom Brady and Jimmy Garoppolo both threw interceptions, with Garoppolo having some accuracy issues throughout. His best day was Thursday, the first day of camp, but has been inconsistent since.

The play of the day was Malcolm Butler’s interception of Brady. Butler stepped in front of Josh Boyce, jumping the route as Brady was trying to fit it in a tight window down the seam. Butler, who has been very competitive during camp, was doing some trash talking after the play. Always fun to see the player’s competitive juices flowing.

– The defense, overall, had a terrific practice. The unit won a good majority of one-on-one matchups and kept the offense out of the end zone during most of the goal line drills. Devin McCourty and Chandler Jones were very vocal during that portion of the day.

I continued to be fascinated with the defensive alignments we’ve seen so far in camp. On Tuesday the perceived first-team was in a 3-4 look, here’s the lineup:

Malcom Brown and Chandler Jones on the line; Jabaal Sheard and Rob Ninkovich standing up as outside linebackers; Jamie Collins and Jerod Mayo at inside linebacker; Malcolm Butler, Tarell Brown and Logan Ryan (slot) at cornerback; with Devin McCourty and Patrick Chung at safety.

The coaching staff subbed a lot of players in and out, but I thought that group was intriguing. Bill Belichick and Matt Patricia seem to like the idea of Ninkovich, Jones and Sheard on the field at the same time.

Flowers has received a lot of quality reps through the first five days and is holding his own in the process. Johnson has stood out in the middle, taking advantage of Andre Branch’s absence (PUP), and Martin has flashed during pass rush drills. Something to monitor moving forward.

– The major concern going into camp was the cornerback position. I know many fans are worried the pass defense drops off, which is expected after the talent lost in the off-season. The concerns and questions are valid, but the group has competed well to this point. They don’t have to be great, but the front-seven will have to rise up and take some pressure off the group.

– With Edelman and right tackle Marcus Cannon not taking part in Tuesday’s session, it gave others the opportunity to step up. Tackle Cameron Fleming and receiver Danny Amendola both stood out during drills. Amendola has looked sharp this summer, hauling in tough catches and running crisp routes.

– Brandon Gibson and Jonathan Krause showed good quickness and footwork to get free from defensive backs on several occasions. Both are battling uphill for a roster spot, but have displayed the ability to create separation and maximize their opportunities.

– Jerod Mayo has been very active throughout camp and it’s come as a bit of a surprise. After suffering a season-ending knee injury last year in week six, he’s been in the mix during drills. His presence gives the front-seven more versatility and could give Hightower the ability to play closer to the line of scrimmage.

– I spoke to Hightower briefly after practice. When asked about his shoulder her said, “I feel good. It’s right where I need it to be. I’m dying to get back out there.”

He’s been involved during drills, but still not being as physical wearing his red no-contact jersey. He was in good spirits, but you could tell he’s itching to get back to hitting.

– Willie McGinest was in attendance Tuesday. He spoke with the media during practice, then was on the field observing. As practice came to a close, McGinest broke down a team huddle and got a loud applause. He will be inducted into the Patriots Hall of Fame Wednesday evening.

READ NEXT:
McGinest to Current Patriots: “Cherish the Moment”
Posted Under: Patriots News