Drew Bledsoe broke franchise passing records for attempts, completions and yards. With no running game behind him Bledsoe threw 691 passes in 1994, an NFL record that stood for 18 years. That same season he set NFL records for pass attempts and completions in a single game, an epic battle against the Vikings. That victory was the beginning of a seven game winning streak that pushed the Patriots into the playoffs for the first time in eight seasons.

It seems unfathomable now, but there was a time when people genuinely believed the Patriots should draft Rick Mirer over Bledsoe. Thankfully the Pats selected the kid from Walla Walla over the Notre Dame hype machine. Bledsoe is one of only two players to complete 400 passes in a single season in the 20th century and one of only five from that time period to pass for over 4,500 yards in a season. The most important aspect about Drew was that he made New England fans proud of the Patriots, rejuvenating a region after some embarrassing times – and creating excitement about the team that would result in their staying put and not moving away.

Other Patriot February 11 Birthdays and Events, Part One

“If you have ever seen your butthole you can’t say it was an accident; there are just too many steps involved for it to happen by accident.”
– Rich Ohrnberger

The Patriots originally signed Rich Ohrnberger as a backup that could eventually replace Stephen Neal. He began 2009 on the practice squad and later appeared in three games. Rich had an opportunity in 2010 when Logan Mankins held out in a contract dispute but Dan Connolly took over at left guard instead, with Ryan Wendell getting 11 starts. Ohrnberger struggled in preseason action and was on the field for just two games that year. He was waived at the end of the 2011 season after spending the year on injured reserve due to a concussion.

Ohrnberger spent one season with Arizona and two with San Diego, appearing in a total of 39 NFL games. He is known for his offbeat humor, such as doing handstands in the shower room. The reason for that he stated was because it was ‘the best way to get the undercarriage completely clean’. Today Ohrnberger works as a radio host on Fox Sports Radio and is a color analyst for San Diego State football games.

“I’ve had both shoulders operated on, part of a clavicle bone removed, spent a season on IR because of a concussion, ruptured my MCL, and had back surgery. That’s the abbreviated list. Football is about dealing with pain. It’s unavoidable, but it wears you down.”

“I don’t know Andrew Luck, but he isn’t a coward, he loves football, and he isn’t giving up because rehabilitating injuries is ‘too hard.’ Everyone has their steak and bourbon moment eventually. His was in front of the world, and he handled it with class and poise.”
– Rich Ohrnberger on the harsh realities of being a professional football, responding to those who criticized Andrew Luck for retiring.

Clive Rush was the offensive coordinator for the Jets when Joe Namath was named player of the year, and the Jets stunned Baltimore by winning what would later be known as Super Bowl III. That game led Billy Sullivan to hire Rush rather than his other candidate, the defensive coordinator from the Colts: Chuck Noll.

His tenure began on an ominous note, nearly being electrocuted to death (see the Feb 12 entry). From there it went downhill, with horrible trades (Nick Buoniconti, Leroy Mitchell) with virtually zero value in return. Rush was also a tightwad that resulted in good players being cut. One such money saving confrontation resulted in another infamous Patriots incident. Rush cut players just before the game was about to start over a salary dispute. The problem with that he now needed players for the kickoff. Rush had the public announcer page Bob Gladieux to come to the locker room, quickly sign a contract and get on the field.

In another instance Rush came up with the idea of the Black Power Defense, apparently a hat tip to what was happening in the USA in 1969. Clive bragged that he would be the first coach in NFL history with eleven black players on the field at the same time. Problem was that he neglected to notice that he did not have enough African American players on his defensive roster to make that happen. 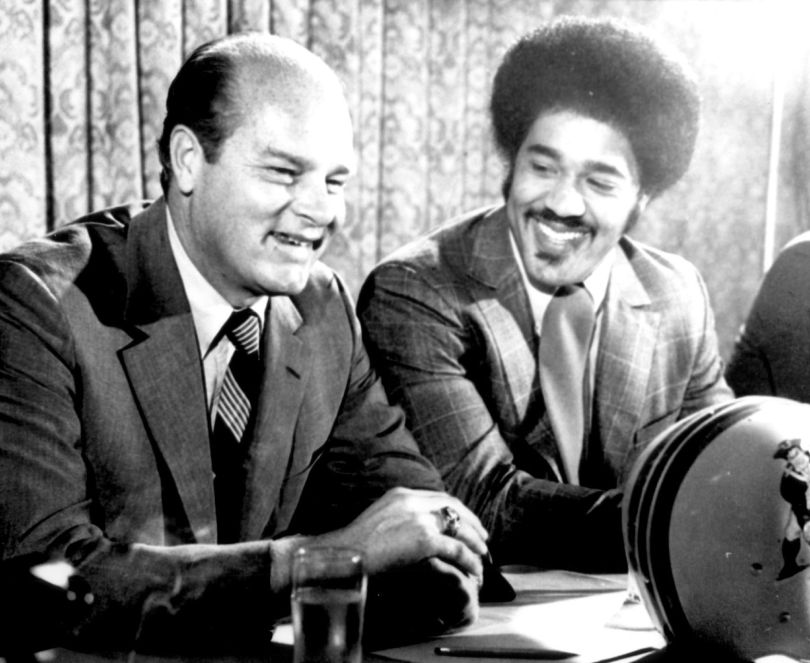 Rush was paranoid about many things, such as opponents listening to locker room conversations with hidden microphones. That fear led him to another iconic moment in Houston. When returning from a game at the Astrodome he convinced himself that the driver was taking him on the scenic route in order to increase the fare. Rush vehemently complained and ordered the driver to stop. He then got off the bus and wandered into the middle of the street. Holding his hand up Rush commanded oncoming traffic to stop and waved the bus through a one-way street: the wrong way.

Jeff Dellenbach played with Miami for ten years, replacing Hall of Fame center Dwight Stephenson in 1987. He appeared in 17 games with the Pats, and played in 211 games over the course of his fifteen year NFL career. Dellenbach hurt his back and was replaced in the starting lineup by Dave Wohlabaugh. When Dellenbach was ready to return Bill Parcells liked the play of the 23 year old enough that he waived Dellenbach on September 10, 1996. Late that season the Packers signed Dellenbach for veteran depth on their line, and the Wisconsin native ended up winning a ring in Green Bay’s super bowl victory over the Patriots.

Dellenbach had a bit role in the 1994 movie Ace Ventura: Pet Detective as one of the Miami Dolphins players. Since retiring he worked as an assistant offensive line coach for Miami from 2003-2005, and as a high school football coach in south Florida. Dellenbach now runs a football camp for high school student athletes and a charitable organization for severely ill and injured children.

Harry Colon started 14 games as a rookie during Dick MacPherson’s first season as head coach in Foxborough. He played in the NFL from ’91 to ’97 and is now a high school head football coach in Houston.

Not much info on this original Patriots thanks to another pro football player with the same name. He was originally drafted by Pittsburgh in 1957, from the University of Miami. Our Mr. Bennett played in two games for the Pats in their inaugural 1960 season.

The lineman from Texas Southern only played in one game with the Pats, but did win an AFL championship with the Houston Oilers. Perkins was one of many great players from Texas Southern at that time that went on to play in the NFL despite not being in a power conference. Other from that era include Patriot WR Charlie Frazier, Hall of Fame receiver Bob Hayes, Warren Wells, Winston Hill, Art Strahan, and more.

Some other pro football players born on this date with a New England connection:

Patrick Ramsey, 41 (1979)
Draft Pick Trade
In 2002 the Pats traded a third and seventh round pick in order to move up from #32 to #21 in the first round. The Patriots used that selection on TE Daniel Graham. Washington selected QB Patrick Ramsey at #32; he went 10-14 as a starting QB.

Jason Phillips, 34 (1986)
Draft Pick Trade
His draft pick (#137, fifth round in 2009) was traded by Philadelphia to New England in exchange for CB Ellis Hobbs. The Pats then traded that same pick to San Diego for two draft picks, which they used on OL Rich Ohrnberger and LS Jake Ingram.