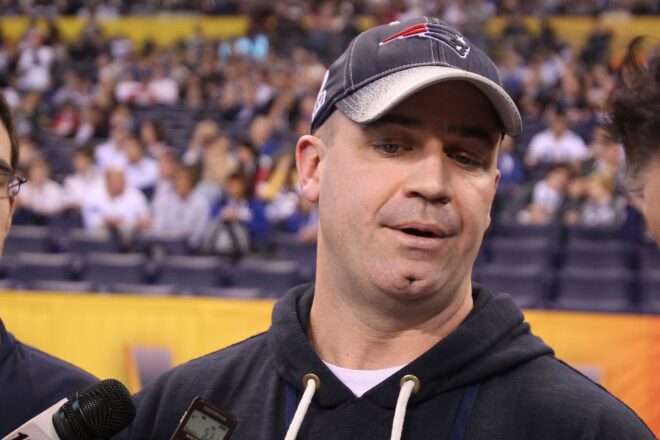 We’re barely three-quarters of the way through January and the New England Patriots have already addressed one of their biggest issues of 2022 with the team having hired Bill O’Brien as their offensive coordinator on Tuesday.

Now the next question is what the impact will be, and if we’ll see a turnaround coming off of what was an overall frustrating season.

O’Brien’s resume certainly speaks for itself, with the former coordinator already having previously had success here in New England.  He was the Patriots’ play-caller here from 2009 to 2011, which saw the club enjoy some of its most productive seasons.

With O’Brien, the biggest thing he brings is both experience and credibility, with the latter being the thing that seemed to be missing and impacted things the most this past season.

Unlike in previous years, players openly questioned the direction of the offense both during training camp and throughout the year, which essentially revealed the lack of trust the players had with the offense.

Some of those issues clearly spilled out onto the field.  Kendrick Bourne reportedly ended up on the wrong side of things with Patricia before the season even started, which saw the veteran receiver see just one snap in the opener in Miami, which resulted in a 41-yard reception.

It was a play that New England had been sorely lacking for the majority of that contest, but it ended up being too little, too late as the Patriots’ ultimately lost to the Dolphins in what ended up being just a small taste of things to come.

Those issues seemed to linger all year and the offense certainly suffered with it.  Bourne finished with just 35 receptions for 434 yards in 2022, which was a significant step backward from the 62 catches for 877 yards he had the previous season.

The fact such a disagreement wasn’t squashed behind closed doors and seemed to fester all year with one of New England’s most productive players is certainly frustrating.  During that entire time, Bourne said all the right things publicly, but it’s clear that he didn’t seem to agree with the direction of things.

Teammate Jakobi Meyers seemed to echo those sentiments, having also expressed similar frustrations at times, even late in the year. 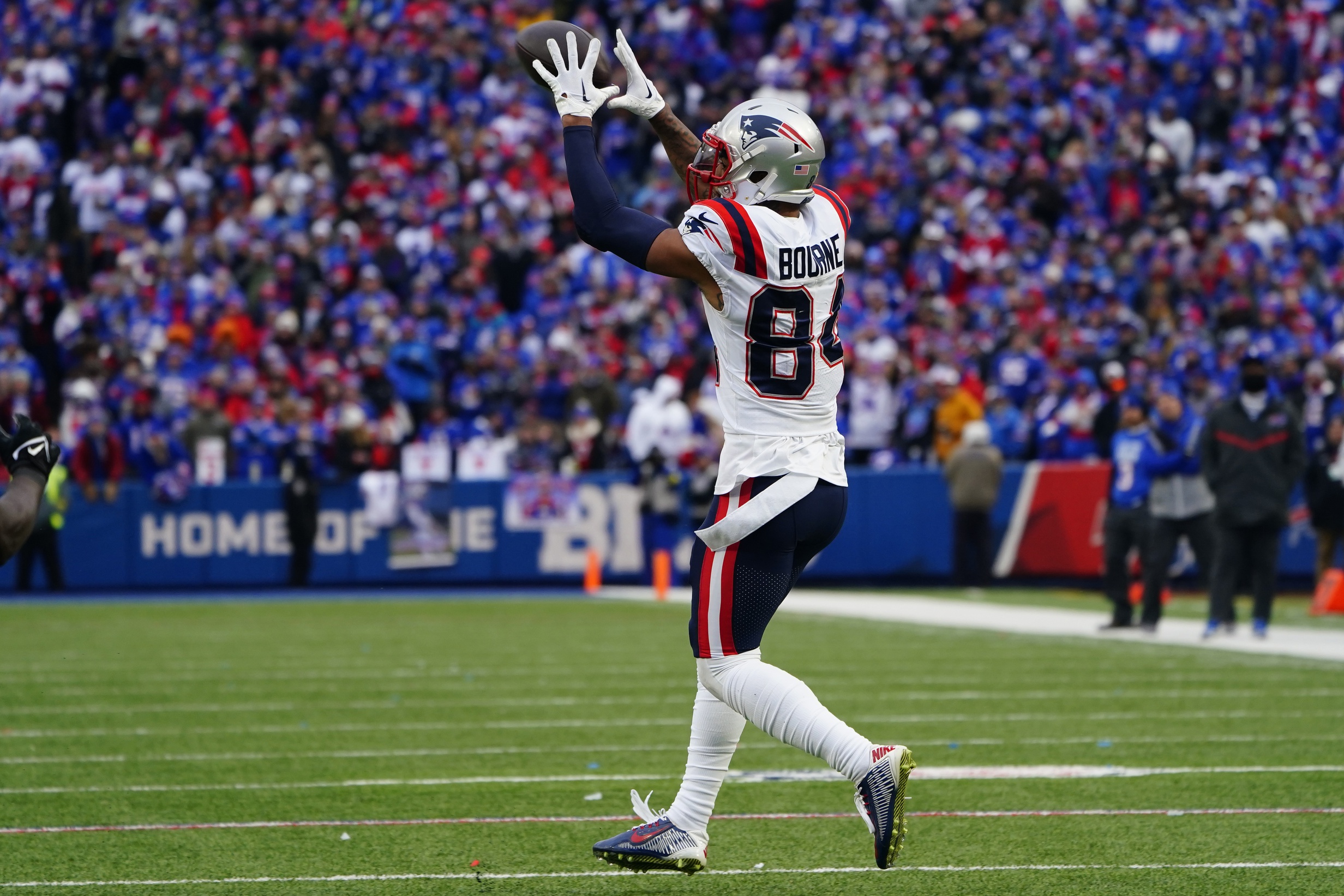 Bourne saw a reduced role for much of 2022. (PHOTO: Gregory Fisher-USA TODAY Sports)

Bringing in O’Brien should certainly at least start to put their minds at ease and wipe the slate clean.  He’s also someone who is demanding, with a big focus on the details and the things they had problems with last season.

For now, the biggest question is going to be how O’Brien revitalizes a group that was incredibly inconsistent in 2022.  How he does that, is clearly a little complicated, and NBC Sports Boston’s Tom Curran talked about that in an appearance on WEEI on Tuesday.

“It’s complicated in that, what is the problem that plagued the team last year?” said Curran.  “Was it simple quality control?  Was it discipline?  Was it personnel?  Was it offensive line? Is it a quick fix?  Or do you come in and say, ‘we kind of need to tear this thing down to the studs?’  I don’t think they do.”

“The quarterback is fine.  Not great, but fine.  So to me, it’s complicated in that you’ve got to figure out what offense are we going to run going forward, what do we throw out from last year, and how do we improve this quality control?  Is there a bigger issue there with whether or not these players have gotten to a point where they don’t listen like they did, or have the same level of personal responsibility that they did when the team was actually good?”

The players clearly weren’t happy, especially late in the season, with their first match-up against the Buffalo Bills being the one most fans remember.

Obviously, the most notable moments happened with quarterback Mac Jones, who was visibly frustrated and was caught on camera screaming at Patricia during their 24-10 loss to the Billls at Gillette Stadium.

The frustration was certainly understandable.  For an offense that scored 48 offensive touchdowns in 2021 (24 rushing, 24 receiving), the team took a giant step backward last season.  They eeked out just 31 offensive touchdowns (12 rushing, 19 receiving) through 17 games, with Jones finishing the season with just 14 passing touchdowns, 8 fewer than the 22 he threw in 2021.

Unlike what we saw in 2021, Jones looked tentative and appeared to lack confidence, which clearly impacted his production and the offense as a whole.  The same could be said for the players around him from top to bottom, with Patricia also being the offensive line coach in addition to his role as offensive coordinator. 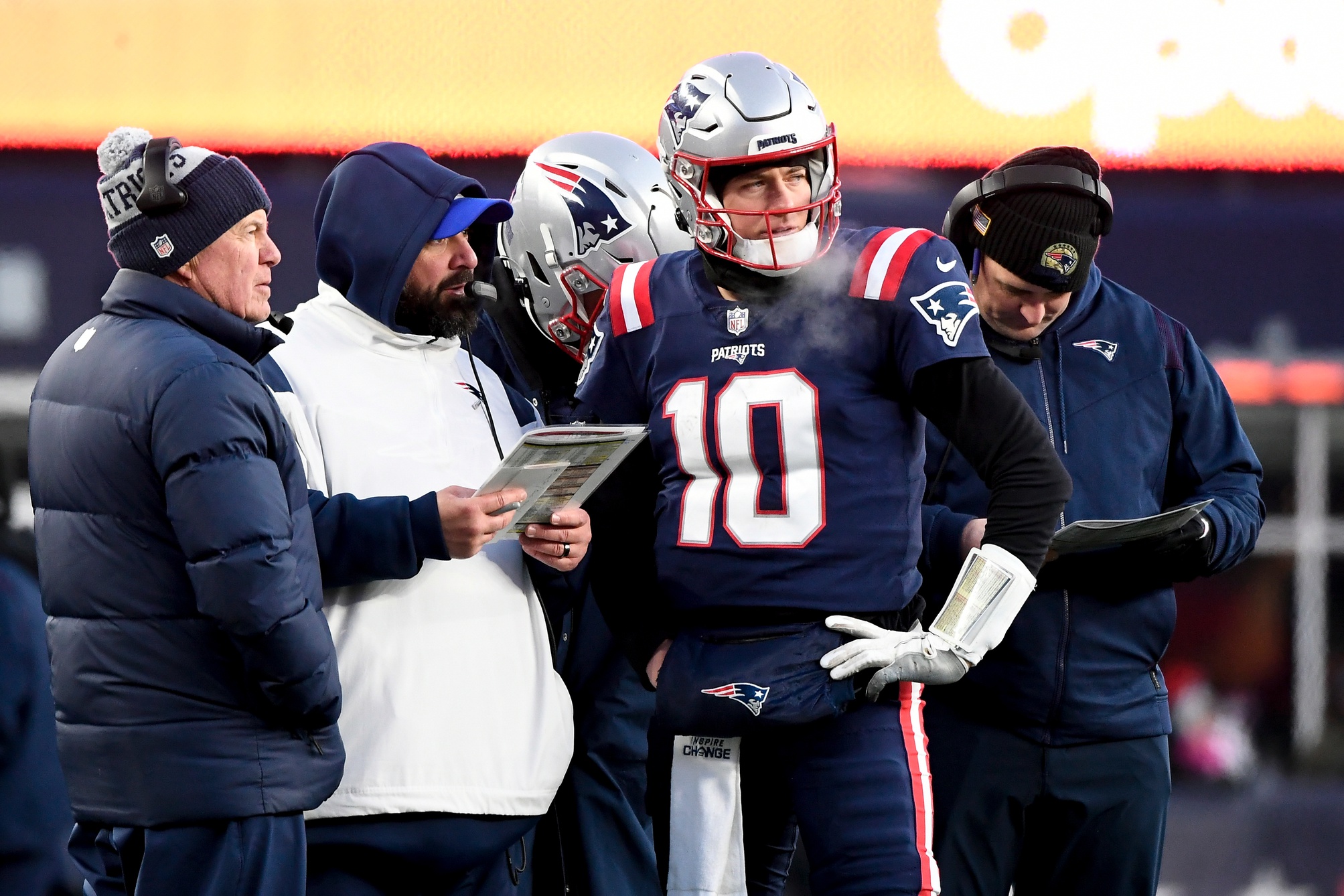 Jones and Patricia never seemed to be on the same page in 2022. (PHOTO: Eric Canha-USA TODAY Sports)

A lot of those problems really centered around the lack of detail and the overall execution, with multiple situations showing up on film throughout the season.

With the offensive line struggling to give adequate protection for much of the year and the spacing in the routes – which included guys colliding and being too close together – clearly, there were issues.

O’Brien is a stickler when it comes to both areas, and one of the biggest things he brings is a level of credibility when it comes to players trusting the “why” as players try and understand certain aspects behind what they’re doing.

That was something that was definitely missing last season, especially between Jones and the coaching staff.  It’s like any profession.  It’s hard to take any real guidance from someone above you if you potentially have doubts about what you’re told to do.

Even then, you still have to do it to the best of your ability. And when it does go south, there’s sometimes a flare-up, whether outwardly or inwardly.

Some question whether or not we could see similar flare-ups between the two, especially given that O’Brien is a pretty firey guy himself.  But the biggest difference in these situations is the fact that there’s likely to be a far greater trust between them, allowing Jones to hopefully play with more confidence instead of potentially doubting a sequence or a play as it felt like he did at times this season.

Jones and O’Brien do have a history, with O’Brien having spent the last two seasons in Tuscaloosa with Jones’s former head coach, Nick Saban as Alabama’s offensive coordinator.  The two spent time together briefly as Jones was headed to the NFL, with Jones helping O’Brien get acclimated with the Crimson Tide’s offense.

However, the two reportedly had a good relationship, and that familiarity will likely play a role as they begin working together here.

When Belichick first arrived here in 2000, he instantly brought a level of stability and credibility, and it didn’t take long for him to earn the respect of his players before things turned around.

While O’Brien isn’t at Belichick’s level, his experience and knowledge should have most offensive players in that locker room feeling a little better about the direction things are headed in.

Still, coaching is one thing, execution is obviously another. Either way, hopefully, both are better in 2023, and with O’Brien in the fold, there’s at least now a reason to feel like that’s a possibility.

By: Mark Morse
Today I am going to give a wrap-up of the East-West Shrine game practices.  The Patriots coaching staff has been very hands-on.  Steve Belichick arrived…
9 hours ago