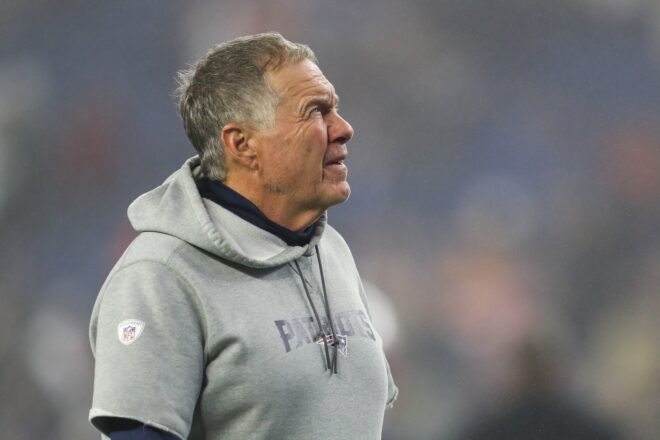 With two games left to play and a potential playoff berth still up for grabs, the New England Patriots find themselves in an interesting situation.

Despite sitting at 7-8 and seemingly buried after coming up short against the Bengals last Saturday, the Patriots remain very much alive among the teams in the AFC who will spend these final two weeks jockeying for a playoff spot.

How that happened is certainly surprising, but given what a crazy year it’s already been in the NFL, that shouldn’t shock anyone.  There’s been a lot of less-than-good football this year and not a lot of great, leading to a lot of teams stuck in the middle.

As a result, rather than getting ready for the offseason, several of those teams – including the Patriots – have a real shot at seeing their seasons extended.

Considering what we’ve been watching over the last month, it’s hard to feel overly confident in terms of how far this club might go.  As it stands, they’ve gotten this far primarily thanks to their defense, which still remains in the top 10 in the NFL in yards per game (320.9) and points per game (19.4).  This is also a team that’s second in sacks (50) and tied for second in interceptions (16).

Obviously, it’s the offense that remains the key question mark, with every week seemingly still a grind when it comes to getting on the scoreboard.  After getting shutout during the first half on Saturday, their first points came thanks to a pick-six by rookie Marcus Jones, with the next coming on one of their best drives of the season after Mac Jones hit Kendrick Bourne on a nice throw of 32-yards, finishing it off with another nice pass again to Bourne in the back of the end zone.

The final score took a little luck.  Jones pulled off a bit of a miracle after eluding defenders and buying enough time to fire off a 48-yard throw to Scotty Washington, which ended up being deflected to Jakobi Meyers, who snatched the ball out of the air and walked into the end zone for the touchdown.

Ultimately, they came up short thanks to a fumble by the normally reliable Rhamondre Stevenson, who lost the football after being pushed back on a run on 1st-and-5 from the Bengals’ 5-yard line and ended their comeback chances.

But that was probably the most signs of life we’ve seen from the offense since Thanksgiving, which was one of the few positives to take away from an overall frustrating loss.

The big question now is whether or not they can do enough on the back of this defense to make some noise and rattle the cages of opponents in the postseason.

Clearly, that first requires getting past the Dolphins on Sunday, followed by heading to Buffalo just in time to potentially play spoiler against the Bills.  Nothing would be better than getting the upset and possibly costing Buffalo the top seed, while also building a little confidence.

The fact they’re even in this position is surprising, especially considering what a mess they’ve been for well over a month.  Every week the common quote from the coaches in players is, “we’ll look at the tape and make the corrections.”

So far, there’s definitely been a lot of tape, but seemingly not very many corrections.

The ill-timed penalties and miscues continue to plague them, which has been the theme all season.  We saw the film of Bill Belichick standing on the sideline during a embarrassing loss in New Orleans in 2009, admitting something he probably feels this season.

“I just can’t get this team to play the way we need to play,” Belichick told Tom Brady at the time.  “I can’t do it. So [expletive] frustrating.”

He’s probably having similar thoughts, given what they’ve been through to this point.

During Mac Jones’ first season as a starter, there was a lot more confidence and Josh McDaniels did a good job evolving on a weekly basis and giving his young quarterback and the offense an opportunity to be competitive each week.

This year, a lot of that has been uneven.  Matt Patricia has certainly struggled to adjust in his first year as offensive coordinator, which has been the discussion for much of the season.   But the bigger problem is after Jones’ early season turnovers, unlike McDaniels, Patricia seems to be dwelling on the past while not having the same confidence in being more aggressive with the play calls in the face of adversity.

Unfortunately, that type of mindset does tend to trickle down to the players, and it feels like that’s what we’ve seen at times.  We’re at this point of the year where the damage is done, and you’re going to live and die by how your quarterback plays.  There’s no point in playing scared, and as Jones said the last time they played Buffalo, it makes sense to “just go down fighting.”

We know the play designs have been an issue.  We’ve seen problems with the spacing.  The collision between Hunter Henry and Jonnu Smith, both NFL veterans, was a moment in time that will likely be reflected on for years to come when people look back on this season.

We’ve heard many times throughout the year that there’s some doubt in the locker room about what’s going on.  That’s seemingly led to what appears to be larger cracks among players who have seemingly lost confidence in the coaching on the offensive side of the football.  In the past, Brady played a part in keeping the whispers to a minimum and staying focused on the task at hand.  They don’t have that right now.

That’s not to say that what unfolded in the second half on Saturday won’t galvanize them and give them some confidence.  They did enough right where they should absolutely realize they’re not as bad as they’re playing collectively.

Should they win these final two games, especially the finale in Buffalo, some crazy things could happen.  There’s not a lot of elite among the AFC right now, and even those elite teams have shown that they’re vulnerable.  We see upsets every year, and should any or both of the two top seeds get bounced, all bets could be off at that point.

Whether or not they should be part of that is hard to argue, but if they pull off the unthinkable and win out, this year has been unpredictable enough that some wild things could happen.

For now, it’s on to Miami and whatever else Sunday has in store to add to this already bizarre 2022 season.