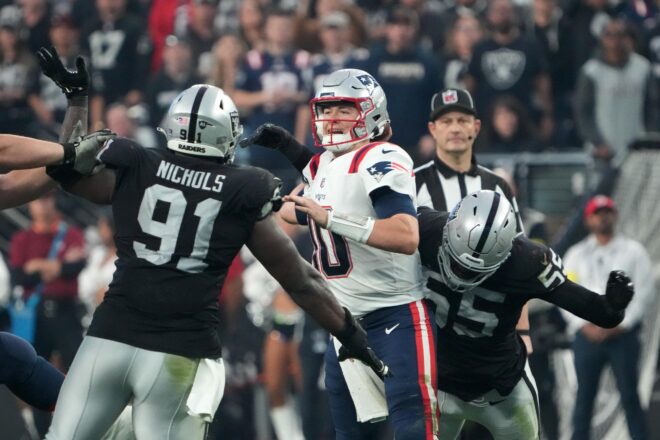 Some thoughts coming off Sunday’s stunning 30-24 loss for the New England Patriots in Las Vegas:

1) It’s probably safe to say that this one might go down as one of the most disappointing in the Bill Belichick era, and the sequence of events that took place over the final minute were definitely frustrating.

It started with a deep ball from Raiders quarterback Derek Carr to Keelan Cole, who managed to get a step behind speedy defensive back Marcus Jones as the two were racing down the sideline.  Carr dropped it in just behind Jones, who was right there as the ball hit Cole’s hands.  Unfortunately, the Raiders’ receiver was able to hold onto the football in the end zone for the game-tying touchdown.

The stadium went crazy, with Cole’s scoring play coming with 0:37 left to go in the game, and it seemingly had the two teams headed to overtime.

However, replays showed that the toe of Cole’s right foot touched the white boundary line, and it appeared that the call would potentially be overturned.  That led to a few tense moments while the officials reviewed it.

But to the surprise of those of us in New England, the play stood as called, and it seemed like we were headed to overtime.

Obviously, that didn’t end up being the case.  The Patriots got the ball back with 0:32 still left to play and two timeouts remaining.  But after burning those and with only 0:03 left in regulation near midfield, the fateful play came where Rhamondre Stevenson lateraled to Jakobi Meyers and the rest is – unfortunately – history.

While there’s reason to question the call of the previous touchdown, it doesn’t change the fact that play came on second down for the Raiders and they still would have had another play to potentially extend the drive and get points.

Maybe they get it, maybe they don’t, but it’s tough to rely on the officials in what’s been one of the more inconsistent years as it is when it comes to officiating.

The officials told the pool reporter after the game that they “looked at every available angle, and it was not clear and obvious that the foot was on the white.”

Based on the television broadcast, there doesn’t appear to be cameras on the back corner of the end zone.  The officials claimed the best view they had was the “high end zone” view, and said they “blew it up” but there was nothing “clear and obvious” to overturn it.

The fact there are cameras in the front pylon, and not the rear ones seems a little ridiculous, especially given that the technology exists.

But again, it is what it is.  And it just felt like a fitting end to a game that, after how everything else had played out, the Patriots really didn’t deserve to win anyway.

2) Anyone hoping to see the offense take a step forward today was definitely left disappointed.  Mac Jones had the worst game of his career, even ahead of the debacle in his brief appearance against the Bears earlier this season.

Jones completed just 13-of-31 (41.9%) for 112yds on Sunday in Las Vegas, which was statistically worse than the second meeting against the Bills last season when he completed 14-of-32 (43.8%) for 145yds along with two interceptions.

The one bright spot is the fact he didn’t commit any turnovers, but it was also a surprising step back for a player who has had a tough sophomore season.  A lot of the issues where the throws were close but were either just off target or overthrown hurt them, which is something Jones said afterward was an issue.

“I think we just got to score more points early,” said Jones, who looked about as dejected as we’ve ever seen him after the game.  “A play is a play, and I didn’t execute enough good plays today. If you don’t do that, then you’re not going to score. Just a tough situation that definitely falls on me – I got to be better.”

The Raiders did a good job of keeping him off balance, and there were a few drops here and there.  But he was clearly not sharp, and New England never really got into much of an offensive rhythm.

Jones will likely spend the plane ride back reliving the missed tackle where Chandler Jones ran him over on that final game-ending play.

Not that Jones should blame himself.  He shouldn’t have been in that position, and that entire disastrous sequence slammed the door on a game where, given how poorly they had played prior to that point, they really had no business of winning anyway. 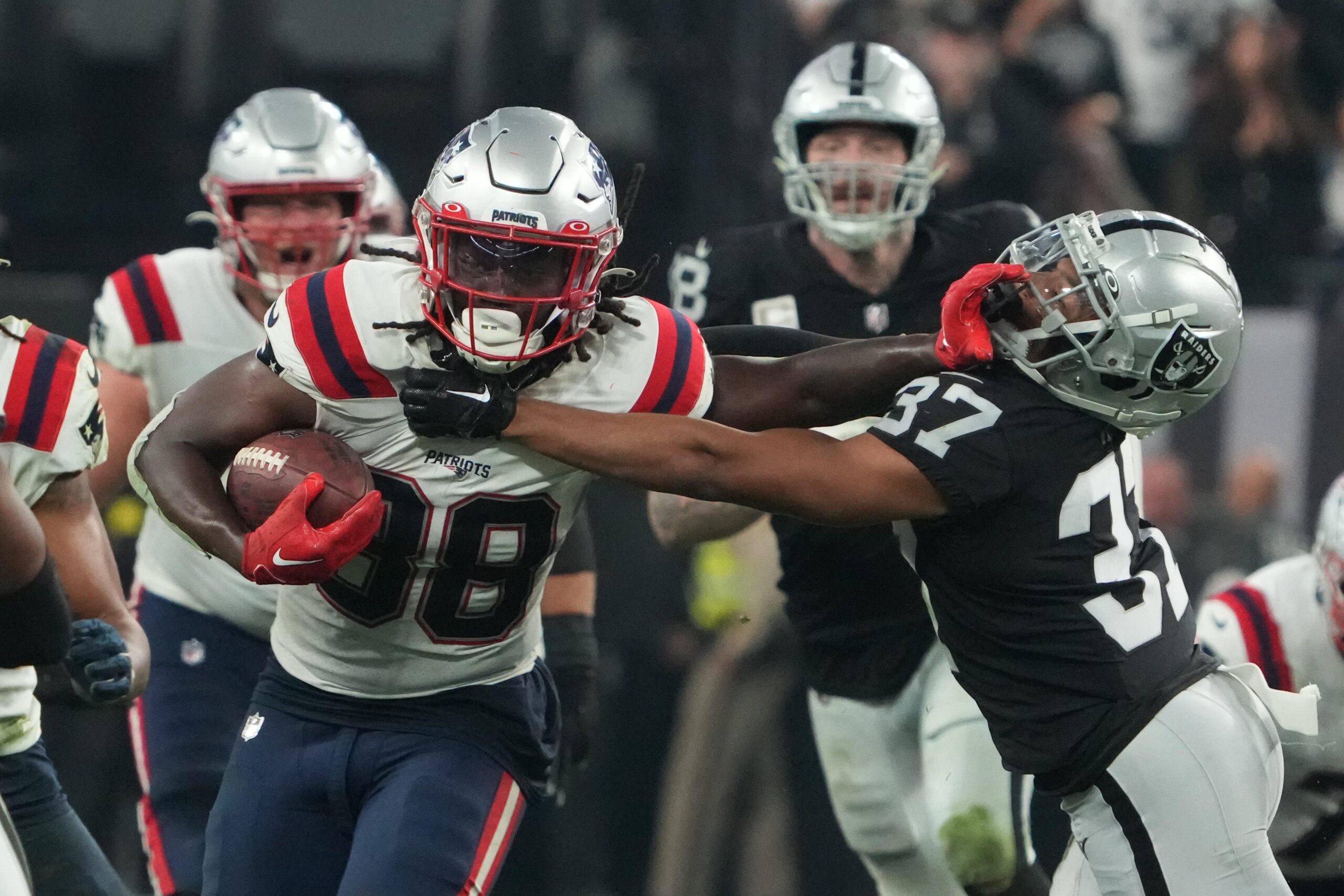 3) Rhamondre Stevenson was big again on Sunday, with the running back carrying 19 times for a ridiculous 172-yards including a touchdown.

His touchdown was massive, with Stevenson breaking off an impressive 34-yard run where he broke through defenders on the way to the end zone, which at the time put New England up 24-17 with just 3:43 left to go in the game.

For a player one week removed from what seemed to be a significant ankle injury, he didn’t seem affected by it.

With Jones struggling, Stevenson carried the offense and it’s obviously disappointing that New England’s defense couldn’t quite close things out.  But he remains a player who continues to just be outstanding.

It’s just unfortunate that this far into the season, they haven’t been able to put enough together on that side of the football to compliment his efforts.

4) People may bring up the game-tying touchdown allowed by Marcus Jones, but the rookie really did a solid job in a bigger role for a secondary that was significantly limited.

New England was again without Jalen Mills and was also down Jack Jones, which left them in tough shape against an extremely formidable Raiders offense.

Marcus filled in admirably and was part of the reason the Patriots managed to keep things close after the Raiders started taking control of the game.

He did make a key play in this one early on, providing great coverage while making a perfectly timed deflection on a bomb to Devante Adams on Las Vegas’ first possession.

He finished the contest with four tackles and, aside from the controversial touchdown play, really did a great job.

He’s obviously been one of the bright spots with his efforts on both offense and in the return game, but he’s also starting to settle in nicely defensively.  He’s a guy that we’ll likely talk about fondly whenever this season comes to an end, and he remains a terrific building block for the future of this team.

5) Penalties and mistakes continued to be a problem on Sunday, with this team continuing to be error-prone despite how late we are in the season.

For a guy who is also normally so great situationally, Bill Belichick also called an ill-timed timeout early in the second-quarter as Jones and the offense faced 3rd-and-goal from the Raiders’ one-yard line.

On the snap, Jones threw a perfectly thrown ball to Meyers for a would-be touchdown, but the play was whistled dead due to the timeout.

“We didn’t have the play right,” said Belichick when asked about it afterwards.  “So I took a timeout so that we did it right.”

He wouldn’t elaborate on what was wrong, but on the next play, Jones couldn’t quite hit Nelson Agholor on a quick slant and then he snapped the football too quickly when they went for it on fourth down on a play where he leaped over the center into the end zone for what would have been a touchdown.  Instead, they were flagged for “false start”, which forced them to settle for a field goal.

That play ended up being a sign of things to come.  They again had multiple penalties on the afternoon that put them in third-and-long, and it continued to hamper an offense that finished 2-of-13 (15.4%) on third down and again couldn’t do much of anything.

But on the defensive side, there was at least one bright spot that came from Kyle Dugger early in the third quarter.  On the play, the Raiders appeared to call a swing pass and Dugger picked up on Devante Adams going in motion and immediately jumped the ball on the snap, snatching the ball out of the air and walking into the end zone for a touchdown.

That play put the score within striking distance, with the Patriots trailing by just a touchdown at 17-10 mere minutes into the second half.

It was a great play and one of the few highlights from one of the most bizarre games in recent memory, with a finish that obviously we’ll be talking about for a long time.

With the Cincinnati Bengals up next, the Patriots are now in a situation where they’ll likely need to win out in order to have a shot to play in January.  Belichick looked rather dejected after this one, and there’s probably going to be some tough decisions ahead.  After all, he has to be at the point where expecting different results week after week is becoming an exercise in futility.

Sunday’s finish should have put as big of an exclamation point on that reality as there is.  And what he does from here will ultimately decide what the ending will be in what’s become a bizarre final chapter of this 2022 regular season.