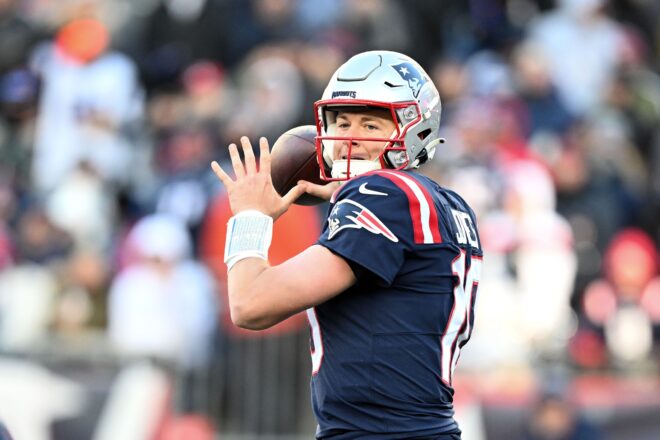 Coming off of Sunday’s win over the Jets, the New England Patriots are likely facing a Minnesota Vikings team that potentially puts some points on the scoreboard this week.  If that ends up being the case, the next question is going to be whether or not Bill Belichick’s football team will be able to answer and give them an opportunity to keep things close.

On the defensive side of the ball, the Patriots already have things clicking.  Sunday’s 3-point effort now has the Patriots’ defense ranked second in the league in points per game at 16.9, just .2 behind the Dallas Cowboys.  That same Cowboys team had its own success this past weekend after pulling off a similar performance in Minnesota, shutting down a prolific Vikings offense during a 40-3 beatdown on their home field.

That loss ended a seven-game winning streak for the Vikings, leaving them with quite the wake-up call just in time for New England to come in this Thursday for a prime-time Thanksgiving Day showdown on national television.  That’s likely going to have Minnesota amped up for this match-up, and the biggest question is going to be whether or not Mac Jones and the Patriots’ offense will be up for the challenge.

Coming off the bye, Jones and company put together one of their best overall performances of the season, with the second-year quarterback showing the most confidence we’ve seen all year.

The week off definitely appeared to do him some good from a health standpoint.  Jones missed just four passes on a windy afternoon at Gillette Stadium, completing 23-of-27 for 246 yards.  While Sunday’s outing didn’t result in points on the scoreboard, Jones made some terrific throws and had plenty of zip on several of those passes.

But over the span of sixty minutes, the offense never reached the end zone, and that’s an area of concern heading into Thursday night.

Obviously, one key part of any progress they might make is going to come down to improving their execution.  However, they’re dealing with a bit more than that as they continue to battle with a lack of continuity up front.

Center David Andrews, who had finally returned from a concussion he sustained several weeks ago, was lost just minutes into the game.  That thrust James Ferentz back into the line-up, and the results were less than ideal.  Ferentz had a tough time in the ground game, which saw both Damien Harris and Rhamondre Stevenson struggle for most of the contest.  While Harris broke off two big runs of 22 and 30-yards on Sunday, he and Stevenson were each held to close to a 2-yard per carry average on the rest of their rushes.  That’s been an area where Andrews has excelled, as he’s a tough, high-intensity type of player inside, and he’s been a key part of their success there.

In the passing game, Ferentz also struggled.  Jones had a couple of sacks where while on first glance it appeared maybe he had a chance to step up and make a play, replay showed things breaking down in front of him as guys came in off the edge.  Inside pressure is a nightmare for any quarterback, and it explains why later in the game, they started rolling him out and moving him around away from the rush.

That’s likely going to have to be a strategy they utilize over the rest of the season.  There’s not exactly a big stable of depth, and considering the team lost Isaiah Wynn to a foot injury, along with the fact Trent Brown is suddenly having a tough time, things likely aren’t going to improve.

Belichick said on Monday that Kody Russey, who was recently added to the 53 man roster, will likely see some time.

“He’s been active for some games but hasn’t played much but just continuing to develop on the practice field,” said Belichick. “Did a lot of good things for us in training camp. Made a real strong impression. Now with the injuries we’ve had on the offensive line, so I think he deserves to be moved up there.”

What’s interesting is the fact that Belichick has been surprisingly both vocal and critical of their issues on offense.  For someone who typically gives fairly vague answers, he expressed his frustrations using “poor” to describe their play, talking specifically about the negative plays and some of the execution.  That was reiterated both in his comments after the game and his appearance on The Greg Hill Show on Monday.

“I think our bigger problems in the red area were just obviously too many negative plays, we weren’t able to take advantage of our scoring opportunities even though we were down there and just didn’t come away with enough production,” said Belichick on Monday on WEEI.  “I mean, in general, I thought that we had decent production in the passing game when we were able to throw the ball, but we had too many plays where we were under pressure and then there were too many plays where we were in long-yardage situations that even though we completed it, we didn’t really have a chance to stay on the field.  Penalties and negative plays, we have to do a better job of eliminating those.”

Overall, they crossed midfield on five possessions and had two red zone opportunities, neither of which resulted in points.  As Belichick pointed out, their biggest problem had to do with the negative plays they sustained that put them in tough spots.

Much of that stemmed from the Jets coming after Jones on early downs, with three of their six sacks coming on first down.   All three of those instances put them in a hole and ultimately killed the drive, including two in the second half.  One of those instances also included a holding call against Ferentz, which put them in 2nd-and-27 in Jets’ territory, which resulted in a missed 43-yard field goal by Nick Folk.

Another frustrating instance came late in the second quarter on their other red zone trip.  After working their way down to the Jets’ 7yd line, Jones converted a 3rd-and-2 by picking up three yards, which would have had them with first-and-goal from the Jets’ 4yd line.  Instead, Yodney Cajuste was called for an offensive holding penalty that negated the play and put them in a 3rd-and-12.  The Jets came after Jones on the next play, with Jones having no chance to get rid of the football and he was dropped for a loss of 9-yards.

As a result, the offense ended up at the Jets’ 26-yard line, which now made the field goal 44yds and with the wind, Folk missed it.

Those are the types of miscues that have been a theme this season, and between those and their personnel issues up front, it further complicates an already difficult situation.

How they’ll be fixed is going to be a key factor in whatever offensive turnaround we see from this team.  With tough match-ups coming up against clubs like Minnesota, and their first meeting against Buffalo next week, it’s going to take putting points on the board if they’re going to be competitive.  They haven’t gone over 30 points all season since they faced Cleveland back on October 16th when Jones was sidelined, and that was with a much healthier offensive line on an afternoon where they ran for three touchdowns, two of which came inside the red zone.

They don’t have that luxury now, which is going to require Matt Patricia to get creative.  Since he’s also the coach of the offensive line, he’s definitely got his hands full and it’s probably safe to say that over this final month or so of the season, the fate of the offense rests in his hands, which isn’t an overly comforting thought.

As for Jones, his goal in the coming weeks is to try and ramp up the intensity in those situations.  He talked about something on Monday on Merloni, Fauria and Mego on WEEI about a mindset he picked up years ago that he says they’ll try and emphasize moving forward.

“I think I learned something actually on a college recruiting visit I think it was at the University of Kentucky, and they were kind of struggling in the red zone in previous years,” explained Jones.  “Their thing was ‘flip the switch’.  When you start getting into that fringe, red area, ‘flip the switch’, this is when you need to really pick it up.  I kind of utilized that at Alabama a little bit too, and obviously, I feel like that will help here.  So whenever you get to that spot, it’s like, ‘Alright, let’s play our best football.  Right here.'”

Let’s hope they can finally “flip the switch” out in Minnesota Thursday night.

By: Robert Alvarez
Linebacker Jahlani Tavai agrees to a two-year contract extension with the Patriots.
7 hours ago

By: Robert Alvarez
Devin McCourty will appear in his 200th career NFL game on Thursday night against the Buffalo Bills, Robert Kraft honors his milestone.
9 hours ago

By: Robert Alvarez
Robert Kraft lends the Patriots team plane to the University of Virginia so its players can attend the funerals of fallen teammates.
10 hours ago

By: Robert Alvarez
Sideline mic'd up sights and sounds during the New England Patriots' Week 12, thanksgiving matchup with the Minnesota Vikings.
10 hours ago

By: Steve Balestrieri
“Why don’t you guys go to the officials with your pool reporter and ask them about the play and let them explain it to you,…
3 days ago
wpDiscuz