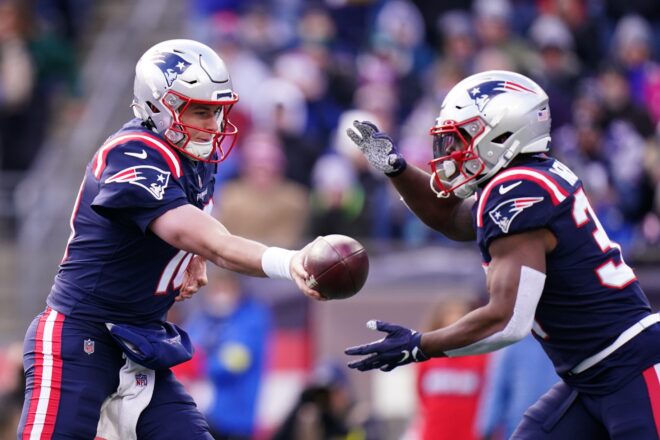 FOXBOROUGH – The only way the Patriots were going to win on Sunday was going to be on a defensive touchdown or a special teams touchdown.

In a game that seemed to be heading towards a 3-3 tie (even after overtime), Marcus Jones returned a punt 84 yards for a touchdown with five seconds left, giving the Patriots a badly needed 10-3 win over the New York Jets on a windy Sunday afternoon at Gillette Stadium. The Patriots began a stretch of five very difficult games, including three games over the next twelve days, and at least got a victory to show for it. One down and four to go, and the Patriots are (at press time) the six seed in the AFC.

The Patriots almost got a defensive touchdown, as a fourth-quarter strip sack by Kyle Dugger, which was returned for a touchdown by Devon Godchaux, was ruled as just a sack as Alex Wilson was (correctly) ruled down by contact before he fumbled. Other than that and the Jones touchdown, the game was an expose on great defense and bad offense on both sides of the ball. In baseball, this would have been a dead ball era game, with Cy Young outdueling Walter Johnson 1-0.

The Patriots sacked Wilson four times, made him look like he usually does against the Patriots, and made things much more comfortable for Mac Jones and the offense by giving them a fairly good margin for error. But it turned out to be a moot point as Jones was sacked a whopping six times, the Patriots were penalized 8 times for 55 yards, and Nick Folk missed two field goals on a very blustery day.

The game was a hail of three and outs on both sides of the ball. The problem is that the Patriots did gain a good amount of yards as a team. The Patriots finished with 297 total team yards, compared to only 103 yards for the Jets. Usually, in a game like this, you aren’t 3-3 in the final seconds of regulation. The penalties, missed field goals and sacks stuffed the Patriots. It just didn’t kill them because the Jets are still the Jets and Wilson is still Wilson.

Let’s begin with the Jets. Wilson finished 9 of 22 passing for 77 yards and a 50.8 passer rating. At least Wilson did not turn the ball over. But holding a quarterback to these paltry numbers doesn’t usually produce a 3-3 tie in the final seconds of regulation.

The Patriots throttled the Jet rushing attack. Wilson led the Jets with 26 yards rushing; Michael Carter was next with only 19 rushing yards on eight carries. As a team, the Jets averaged only 2.6 yards per rush. Run the ball, stop the run, you win. The Patriots stopped the run. Check.

Denzel Mims led the Jets with 35 yards receiving, but that includes one catch for 34 yards. No other Jet receiver broke 20 receiving yards.

Again, terrific defensive performance by the Patriots. So how is it 3-3 with seconds left in regulation?

Jones had a decent game, and did nothing to make the fans chant Bailey Zappe’s name. He finished 23 of 27 passing (seriously) for 246 yards and a passer rating of 104.6. Yes, he was sacked six times. But still…3-3 with just seconds left?

Damien Harris was the bell cow back today. He had 65 yards rushing on eight carries for an 8.1 yards per carry average. Harris also had 28 receiving yards for 93 all-purpose yards. Rhamondre Stevenson had only 26 rushing yards, but he led the Patriots with 56 receiving yards. So he had 82 all-purpose yards. Stevenson also led the Patriots with eight catches.

Don’t blame the wind. The Jets had to deal with it also. Folk did make one field goal, from 24 yards out, but the wind obviously was a factor in the kicking game. Bill Belichick managed the wind perfectly when winning coin flips wasn’t in the cards.

The answer lies in what has been, and continues to be, the biggest Achilles heel of the Patriots, that being the offensive line. David Andrews just came back from an ankle injury, then left the game in the second quarter with a thigh injury which may be season-ending (thanks, Ian Rappoport of NFL Network). Isaiah Wynn, having the worst season of his career, also left the game early with an injury. What is left is not a playoff or a championship unit.

James Ferentz does the best he can as backup center, but he is no Andrews. Cole Strange got burned on a sack and got a holding call against him. As a unit, it is failing Jones and the rest of the offense.

If you go back and check the offensive leaders, all the big numbers went to running backs, not wideouts or tight ends. Jones has no time to develop a rhythm and find deep receivers. The wideouts cannot get involved in the offense if Jones has no time to throw the ball to them. Jet defenders were attacking Jones all game long, with C.J. Mosley and Quinnen Williams leading the team in tackles.

Belichick knows that this sort of thing is not sustainable. In just four days the Patriots have to travel to Minnesota to take on a Vikings team that just beat Buffalo on the road in overtime last week. Then they come home and take on that same Bills team in Foxborough on the next Thursday night. Then they go to Phoenix to play the Cardinals on a Monday night, then travel to Las Vegas to take on a woebegone Raiders team, but it is on Sunday night. Maybe that game will be flexed into the afternoon. If not, that means that the next four games are on prime time national TV (if you count the Bills game “national” despite being streamed live on Prime Video).

At some point, something has to be done. Dante Scarnecchia is not walking through that door. Neither is Matt Light, Bruce Armstrong, Brian Holloway or the great John Hannah. These guys are who we got. Strange was the top draft pick of the Patriots and has tailed off after a good start. Wynn should be ashamed of himself. Andrews is probably on to 2023. Any way they can get Joe Thuney and Shaq Mason back?

Yes, a win is a win is a win. The Patriots are now 6-4, and have won their last five games. If a special election for Boston mayor were held tomorrow, Marcus Jones wins it in a landslide. The Patriots got the lightning bolt they needed to win today while the offense still needs to figure a lot of things out.

READ NEXT:
MORSE: 13 Observations from the Patriots’ Win over Jets
Posted Under: Patriots News

A little harsh I think. Clearly the Pats o-line is a mess but the Jet have an extremely good defense.