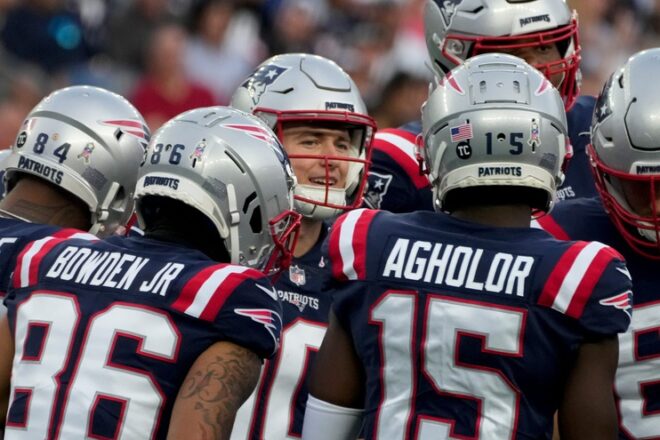 The New England Patriots got back to work on Monday, with their bye week coming essentially at the halfway mark after they beat the Indianapolis Colts in Week 9 to improve to 5-4 on the season.

They were idle this past weekend, which saw both the Buffalo Bills and Los Angeles Chargers go down during two tough losses for each club.  However, their misery ended up working out in New England’s favor as all of a sudden, the team’s postseason outlook changed a bit.  Those two losses resulted in the Patriots sliding into the final Wild Card slot in the AFC, which now has them in the playoff hunt as they get set to resume their season this weekend against the New York Jets.

The Jets were also idle over the weekend after they upset the Bills the previous week, which was the first of two-straight losses for Buffalo after they lost 33-30 to Minnesota on Sunday. New England now has an opportunity to potentially knock the Jets down to the bottom of the AFC East this weekend, which would be a solid first step for a team that definitely has had a less-than-smooth road to get to this point.

With eight games left to play, here are some thoughts on how things might play out over the final month and a half.

Week 11: vs New York Jets – Coming off a tough loss against New England a couple of weeks ago, the Jets were pretty bitter over that one as Zach Wilson stood at the podium, having thrown three interceptions, and started talking about the rematch.  So far, the Patriots have had his number, which has seen them come out on the right side of those meetings while Wilson has been at quarterback.  Still, the biggest question heading into Sunday is going to be whether or not Mac Jones and New England’s offense will take a step forward or if it will be another struggle.  Fortunately, this one is at least at Gillette Stadium, which has seen the Patriots outscore New York 82-27 combined over their last two meetings.  While it’s probably unlikely New England puts up 54 like they did last year, they should still win this one. – Win

Week 12: at Minnesota – This one kicks off the first of four-straight night games, with this one coming on a short week on Thanksgiving.  The Vikings have proven to this point they’re a contender, with Minnesota having won seven-straight games, and it’s a team that is currently one of just two clubs in the NFL with an 8-1 record.  What’s sort of crazy is the fact despite their record, Minnesota is in the middle of the pack statistically in most categories on offense, sitting at #18 in total yards (3202yds), 11th in yards per game (355.8), 16th in yards per play (5.4) along with being 17th in 3rd down efficiency (40.5%).  However, they’re currently second in the league in turnover differential with a +8, which has been a big key for them.  That being said, the Patriots defense is good enough to make life difficult on Kirk Cousins and while I didn’t like this game prior to the start of the season, if Jones can do enough and not give the Vikings the football, they should have a shot. – Win

Week 13: vs Buffalo – The schedule makers didn’t do the Patriots many favors as New England plays its second of two-straight Thursday night games.  This one comes against the Bills, who at least are on an even playing field having also played on Thanksgiving in a match-up in Detroit against the Lions.  The biggest question by this time should be the health of Josh Allen, who got beat up pretty well in their loss to Minnesota over the weekend.  The Bills limited him heading into that game, and that seems to be their plan moving forward, although Allen has suddenly become turnover prone after having thrown multiple interceptions in three-straight games.  As a result, it’s going to be interesting to see where he’s at by the time these two clubs meet.  If the Patriots are still playing good defense by then and the offense has turned the corner, New England should be competitive enough with this year’s group to pull off the upset.  I still believe the home crowd at Gillette Stadium should be electric if this one’s close, and I think they pull off the upset. – Win

Week 14: at Arizona – This game is the third-straight night game and the second of two west coast games against a pretty good Cardinals football team that, like Minnesota, is in the middle of the pack offensively.  Despite their 4-6 record, they’re a team that has played in a fair amount of close games this year, and they’re currently 5th in the NFL in turnover differential.  However, they’re dealing with a fair amount of turmoil, with their head coach on the hot seat and a quarterback in Kyler Murray who is reportedly dealing with an injured hamstring.  Murray sat out Sunday’s game in Los Angeles as the Cardinals beat the Rams 27-17, and the feeling out there is that it should be McCoy for however long it takes for Murray to get healthy.  If he’s healthy, which by this time he probably will be, given New England’s issues against running quarterbacks, this will probably be a tough one.  If he plays well and New England gets behind, I don’t know if Jones is at the point where he could get them back into it.  This one might snap New England’s three-game winning streak. – Loss

Week 15: at Las Vegas – Back at the beginning of the season, I felt like this would be another game where a former coach gets the better of the Patriots, especially with what we saw during their last match-up at the end of the preseason.  Instead, things have gone badly for Josh McDaniels, who may not even be the head coach by the time these two teams play despite having recently received a vote of confidence from Raiders owner, Mark Davis.  McDaniels needs to get his club turned around, and this one truthfully is going to come down to how each of the two teams is playing at this point.  If New England has gotten on track and is playing good football, this defense is good enough to shut down a Las Vegas team that just hasn’t been able to do much of anything.  I’d have to give the edge to Belichick and I think the Patriots beat them.  However, raise your hand if you think it would be ironic if a Raiders loss results in McDaniels being let go after this game. – Win

Week 16: vs Cincinnati – Nothing like a tough match-up on Christmas Eve, but that’s essentially what New England faces this week.  This one comes against the Cincinnati Bengals, who currently sit at 5-4.  It’s tough to say what kind of team they’ll be at this point, especially given the kind of uneven year they’ve had.  At the same time, they’ve started playing a little better football as of late, having gone 3-2 over their last five games.  While they’re not quite yet where they’d probably like to be, they’re still among the top teams in most categories offensively, as well as sitting in the top 10 for turnover differential.  This match-up is obviously quite a ways off, but it’s a team that will likely be trying to make its own playoff push by the time these two clubs face off.  However, the edge in this one would have to go to New England’s defense, especially if they can get pressure on Joe Burrow.  Team’s have had success when they’ve been able to get after him, and this is another game where playing at Gillette Stadium sways my thinking a bit.  I think they get this one, albeit it may be one of the wildest match-ups we witness all year. – Win

Week 17: vs Miami – Another holiday game, with this match-up falling on New Year’s Day at Gillette Stadium.  Considering how the season started and where things are at this point, it should be interesting to see how New England fares in the rematch.  Tua Tagovailoa has been playing some of his best football as of late, which is pretty incredible given how things looked for him health-wise back at the start of the season.  The first match-up between these two teams was obviously frustrating, especially given the turnovers committed by New England’s offense.  Those miscues ended up being big keys in Miami’s win, which, as many remember, was a big talking point coming out of that match-up.  But overall, the Patriots defense did a good job in that game.  The biggest mistake that day came on the big play to Jaylen Waddle, which many seem to forget came just seconds after New England lost Adrian Phillips to an injury.  His loss had Ja’Whaun Bentley playing out of position, which also saw Kyle Dugger take a bad angle after Waddle blew past Bentley.  This time around, this one should be a different story and it likely sets up some interesting scenarios heading into the final week of the season. – Win

Week 18: at Buffalo – At the start of the season, many thought this one would potentially be an easy win for New England, provided Buffalo had things sewn up by this point and were resting its starters.  Given the turn they’re currently taking, the Bills seem to have a crack in the armor, and it’s probably more likely that they’ll have lost a couple of additional tough games ahead of this one.  In fact, it’s entirely possible, especially after last week’s predicted win over Miami, that this game comes down to the Division between these two teams.  The fact the Patriots would even be in this position seems hard to imagine, but don’t get too excited.  After looking back on last year’s playoff loss, this one feels like a similar situation where the Bills are just amped up, and everything feels like a grind.  With this one being played in their place, I think Buffalo takes this one, which is obviously frustrating.  The best chance the Patriots can hope for at this point is that another team knocks the Bills off in the posteason so that unlike last year, they’ll hopefully avoid a rematch. – Loss

We’ll see how things play out.  Again, the previous season prediction was based on them picking up on where they left off last year and building off of it.  Instead, things have clearly been a mess, and any of the above is still based on Jones and the offense figuring things out.  If that doesn’t happen, it may simply end up being a long eight weeks.

Let’s hope the latter doesn’t happen and cross our fingers that they’ll be playing better football over this final stretch.

READ NEXT:
Patriots Fourth And Two Podcast: We Are On To The Jets
Posted Under: 2022 Patriots Season
Tags: New England Patriots Patriots Predictions 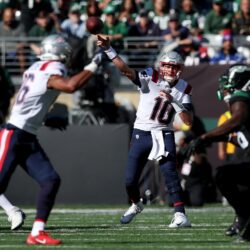 By: Mark Morse
Rather than repeat the depth chart for the Jets I will analyze what they have done since they lost to the Patriots and why I…
3 hours ago 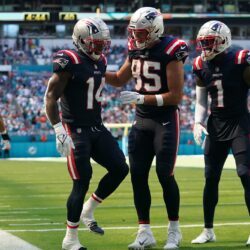 REPORT: Patriots RB Ty Montgomery Out For Rest Of Season 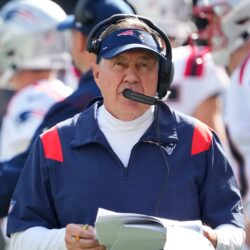 Patriots Fourth And Two Podcast: We Are On To The Jets

By: Russ Goldman
In this episode, we looked back at the season so far by grading the positions and the coaches. We ended the show by previewing the…
1 day ago 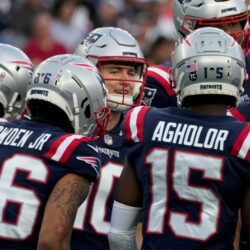 Second Half Predictions: How the Patriots Could Get to 11 Wins

By: Ian Logue
With eight games left to play, here are some thoughts on how things might play out for the New England Patriots over the final month…
2 days ago
wpDiscuz